First test fire of new prototype is a success 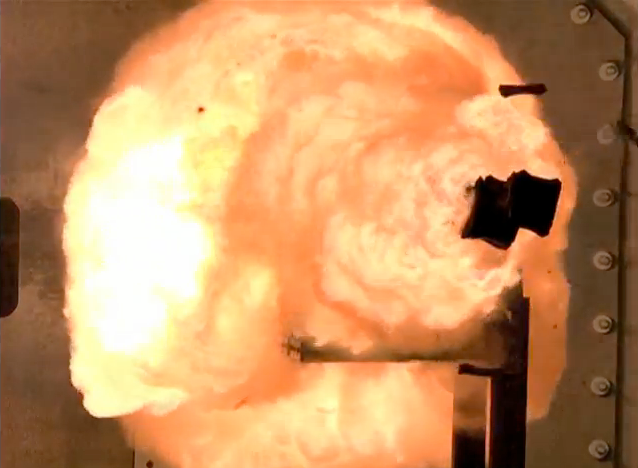 A new prototype of the Navy’s weapon of the future just completed its first test, blasting a chunk of metal through the air at speeds up to 5,600 MPH. Watch below as the Navy’s electromagnetic railgun spews a formidable jet of orange flame.

The best part is when the air behind the speeding projectile blurs with heat!

Defense giant BAE Systems delivered the prototype railgun Jan. 30 and the Naval Surface Warfare Center Dahlgren Division just started testing it. The Navy has tested other designs in the lab, but this one is the first industry-built model. Tests will last two months, during which the Navy will check out the railgun’s structural integrity and barrel life. Another model, built by General Atomics, is due to be delivered in April.

This one is a 32-megajoule demonstrator, according to the Office of Naval Research — for comparison, one megajoule of energy is equivalent to a 1-ton car thrust at 100 MPH.

The eventual goal is a ship-mounted 20- to 32-megajoule weapon that shoots a distance of 50 to 100 nautical miles. It shoots projectiles using electricity instead of chemicals, which would theoretically be safer because you would not have to tote dangerous gunpowder on a ship. It uses an electric field to accelerate a metal conductor between two rails and launch a projectile.

Here’s a video of a previous test.