iRobot’s Cronenbergian Blob Bot is Ready to Roll, or Rather Ooze

iRobot, who brought us the Roomba and friends, have now devised a ball-shaped, undulating “chembot” under the auspices of —... 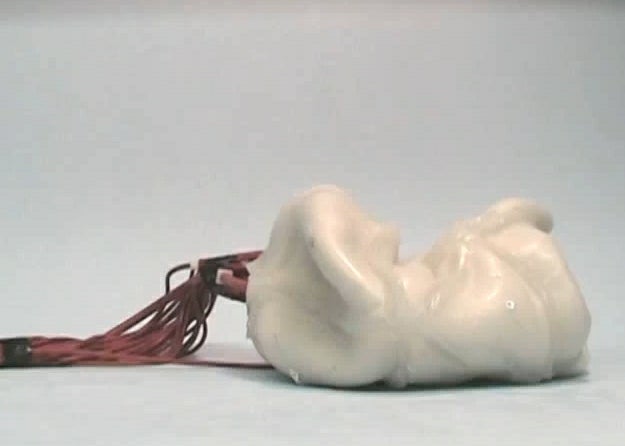 iRobot, who brought us the Roomba and friends, have now devised a ball-shaped, undulating “chembot” under the auspices of — who else — DARPA. The lovable machine resembles something you might find on a surreal dim sum platter: a pale, doughy blob that changes shape, inflates, deflates, and will ultimately be able to squeeze through tiny cracks in pursuit of its target.

Last year, DARPA gave iRobot $3.3 million to work on the morphing chembot, saying “We believe that a new class of soft, flexible, meso-scale mobile objects that can identify and maneuver through openings smaller than their dimensions to perform various tasks will be quite valuable in many missions.”

The bot, which was shown off at the EEE/RSJ International Conference on Intelligent Robots and Systems this week, has a silicone skin, and moves by selectively inflating and deflating parts of its spherical body. But the locomotion system entails more than simple puffing and rolling: The video explains the “particle jamming” system of locomotion, “a mechanism by which material can transition from a liquid-like to a solid-like state.”

These things are going to be little horrors once they achieve autonomy and start oozing up uninvited between the floorboards into your house.