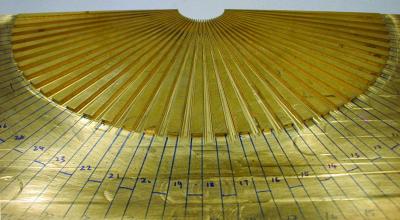 Imaging an unborn fetus and and spotting a lurking submarine could both become much easier with the world’s first acoustic hyperlens. The device manipulates imaging sound waves to provide an eightfold increase in the magnification power of technologies such as ultrasound and sonar.

Hyperlenses use specially engineered materials that combine metals and dielectrics, and allow scientists to image features much smaller than typical light wavelengths. Researchers at the U.S. Department of Energy’s Lawrence Berkeley National Laboratory applied this approach to capture information in evanescent sound waves, which have higher resolution and more detail but dissipate much more quickly than typical waves.

The acoustic hyperlens consists of 36 brass fins arrayed in a pattern resembling a hand-held fan. The fins remain embedded in a brass plate from which they were shaped, and extend from an inner radius of just 2.7 centimeters to an outer radius of 21.8 centimeters.

“As a result of the large ratio between the inner and outer radii, our acoustic hyperlens compresses a significant portion of evanescent waves into the band of propagating waves so that the image obtained is magnified by a factor of eight,” said Lee Fok, one of the researchers in the Berkeley Lab.

Zhang’s group is now upgrading their approach to produce 3-D images, and wants to make the technique compatible with the pulse-echo technology found in medical ultrasounds and underwater sonar.