New Artificial Larynx Does Away With Dreaded ‘Robot Voice’

For decades, people with vocal cord problems could only hope to communicate in the cold, robotic voice provided by a... 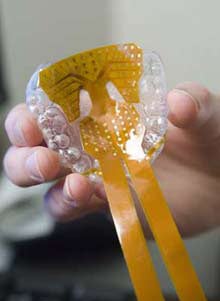 For decades, people with vocal cord problems could only hope to communicate in the cold, robotic voice provided by a mechanical larynx. The search for a more lifelike, and individualized, voice has gone on for some time, but scientists from the University of the Witwatersrand in Johannesburg, South Africa, have finally designed a device that approximates actual speech in people with damaged larynges. The artificial larynx recognizes what the user is saying by monitoring mouth movement, and then uses a speech synthesizer to produce the correct words.

The devices, called the palatometer, uses an array of 118 pressure sensors to measure the movement of the tongue. Since tongue movements correspond to pronunciation almost as closely as vocal cord movements, a computer can calculate the desired word as often as 94.14 percent of the time. Even more important, the researchers will calibrate the device to recognize inflection. This allows users to raise their voice at the end of sentences to indicate a question, and generally avoid the mechanical, monotone sound associated with older technologies.

Other institutions, notably the University of Hull in England, have also developed similar devices. However, the palatometer is the only such invention that operates without any kind of surgical implant. The downside of the South African device, however, is a 0.3-second delay between when the tongue and mouth move, and when the computer calculates the right word. This leaves the mouth and the voice out of sync, giving the user the appearance of being dubbed over in a bad kung-fu movie.

The South African team needs to iron out kinks like the delay before the device can hit the market. But considering the pace their moving at, it shouldn’t be long before the only people speaking with robot voices are Peter Frampton and Kanye.