Emergency medical care for soldiers wounded on the battlefield has come a long way since Hawkeye and Hot Lips. But... 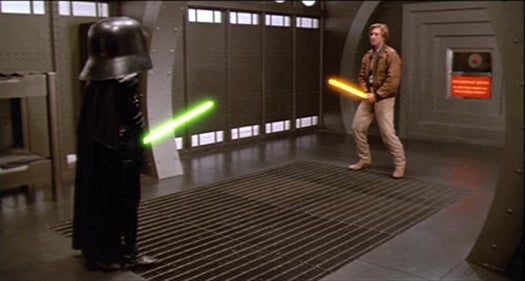 Emergency medical care for soldiers wounded on the battlefield has come a long way since Hawkeye and Hot Lips. But for Special Forces troopers operating deep behind enemy lines, that care often remains out of reach. Blood loss in particular makes seconds count, and imperils commandos operating far away from friendly bases.

To help with the problem of blood loss from traumatic wounds, the military has started field-testing a device more Mandalorian than M.A.S.H.: a plasma knife.

The knife, whose blade consists of heated, ionized gas, cuts through flesh just as easily a steel scalpel, but also cauterizes the wound. By sealing off the damaged flesh, the plasma knife protects against infection, and stops the bleeding that imperils the wounded soldier. Think the crispy stump of Luke’s severed hand, and you’ll get the picture.

For now, the plasma blade remains a life-saving device, not a weapon. But I think it goes without saying that we all look forward to the day when the military converts this technology into a more elegant weapon, for a more civilized time.