While you sleep, scientists will use a space telescope to spy on migrating birds

Scientists are on the brink of learning the details of where they go and why. 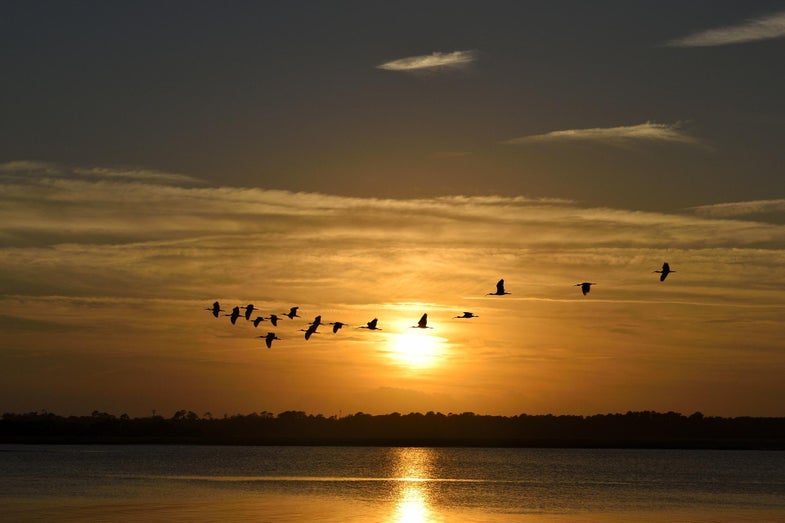 At the end of April, or when spring starts to thaw, a great migration north begins. Thousands upon thousands of songbirds make the trek, but you won’t see most of them. They fly in the dark to avoid as many predators as possible, and in doing so evade the humans trying to study them as well.

So, even as 4,000 of the world’s 10,000 bird species fly over our heads every night, scientists are still scrambling to answer basic questions. When do birds decide to migrate? How dangerous is it? And how do anthropogenic factors like light pollution and climate change impact birds as they travel?

For much of the history of migration studies, ornithologists would have to go out to field stations, catching and tagging birds as they stopped. Research data on a single population took several years of trying to recapture tagged birds. As citizen science bloomed, ornithologists enlisted volunteers to help count their study subjects, then radar allowed researchers to track birds in the air, but even still, the studies were arduous.

“We are learning about things now on much larger scales. Even ten years ago, if you wanted to study something you had to go out and gather the data yourself,” says Morgan Tingley, an ornithologist at the University of Connecticut. “I think in twenty years, ornithologists probably will have a good sense at any point in time where the majority of species are living and what they’re doing.”

Rather than track individual species with isolated studies, ornithologists have their eye on a new tool: a radio telescope module on the International Space Station that will track seasonal migrations from the edge of space.

The mission is called ICARUS, or the International Cooperation for Animal Research Using Space, so-named because the team thought it was so unlikely to actually happen—the project might never fly, but they would try to give it wings anyway. It is now scheduled to be operational in August. The project, along with new radio tag fences, artificial intelligence analysis of radar tracking, and the sharing of study data will help connect different scales of migration research—tracking individual birds, studying particular populations, and watching global movements—into a single, cohesive picture.

For much of their history, migratory songbirds traveled much the same path every spring: they’d fly from the southern areas where they spend the winter to their breeding grounds in the north. White-crowned sparrows trekked from Mexico to northern Canada, Golden-winged Warblers were recently found to migrate from Venezuela all the way to the Appalachians. But like many long-distance migrants, Golden-winged Warblers are in steep decline—their numbers have dropped by 68 percent since 1966.

Habitat degradation at either the breeding or wintering grounds of migratory birds has an impact and is at least partially responsible for this decline. There is also a body of research that has also shown that light pollution can disorient birds, particularly night migrants. The timing of when birds arrive and when spring arrives is also changing rapidly, in large part due to the pressures of global warming, and researchers are struggling to keep up.

Tingley has observed a newfound disparity in when breeding grounds get new plant growth and when birds arrive. “Birds are arriving earlier, and spring is arriving early, but these things are happening at different rates,” Tingley says. It’s still unclear what the impact is on migrating birds on a large scale, Tingley says, and his group is currently researching individual populations to attempt to determine that.

A recent study in The Condor holds some clues for what Tingley may find. Researchers recorded the arrival dates of five species of migrating birds at a field station in northern California from 1987 to 2008. They found that short-distance migrants, like the Pacific-slope Flycatcher, Wilson’s Warbler, and Orange-crowned Warbler, were more able to adjust to yearly weather conditions. They arrived with significant variation in timing each season. In comparison, species that migrate from Mexico and the Andes in South America, like Swainson’s Thrushes and Yellow Warblers, didn’t respond to yearly variation over the 22 years of data they gathered. Those birds showed up about the same day every year, regardless of what the weather was doing.

“This is actually a pattern that’s grown in a number of studies,” says Brett Sandercock, a senior research scientist at the Norwegian Institute for Nature Research who performed the study with his co-author Gina Barton. Short distance migrants tend to be more flexible and adaptable in the face of climate change, he says. The long distance migrants are the ones declining, so much so that he says ornithology meetings can be a little depressing from the constant repetition that “my study species has been declining.” But Sandercock sees big data as a way to help direct conservation efforts in a more meaningful way.

“The BirdCast work, in particular what we released this spring, that approach has literally been 20 years in the making,” says Andrew Farnsworth, a research associate in the Information Science Program at the Cornell Lab of Ornithology. In the 90’s it took weeks to get a few nights worth of data into something useable. Modern computers and machine learning let them analyze 20 years worth of archived data in order to make migration forecast maps, Farnsworth says. “Basically 10 or 15 minutes after the radars have detected what they have detected, we run these algorithms to extract the bird only information and then present it.”

The radar allows researchers to see the volume of bird travel, which often peaks on nights with warm winds from the south, but it still isn’t detailed enough to identify the species of birds traveling. For that, you need to listen in on the trek.

“I have a couple of microphones that are set up on building roofs,” says Laura Gooch, a research associate at the ornithology lab at the Cleveland Natural History Museum. “Many of the ones that migrate at night make vocalizations while they fly.”

The microphones pick up the tiny noises that Gooch says are audible on the ground in rural areas if you’re really listening for them. Even then, Gooch says, you are likely to hear a thrush or a wren and not one of the almost imperceptible peeps of a sparrow without a microphone to isolate the quietest sounds.

Gooch can pick out the distinctive shapes of different bird vocalization on a spectrogram, a visual depiction of the sounds. She is one of a small group of ornithologists that records the night air and can identify these cheeps, often down to the species. Some, like the Redstart, are very distinctive, while others are labeled with group names like “double banded up,” which is a description of what the call looks like on a spectrogram, Gooch says. “And there is another lump of warblers, a whole group—Blackpoll, Blackburnian, to some extent Magnolia—that are known as the “zeep” warblers and it’s hard to distinguish among them” (you can hear a recording of a zeep sound played at 50% speed below, courtesy of Laura Gooch)

Though she has years of data, it takes hours for Gooch to sort through and identify all the birds in peak migration. There can be over 600 sparrow and warbler calls on just one of her stations, and one night she had 4,700 thrush and wren calls. “I have a lot of data that I haven’t analyzed because I haven’t had time to analyze it,” Gooch says. “My hope is that automated analysis will become a reality and the data will be then be useful.”

At the Cornell Lab of Ornithology, Farnsworth is working to build a machine-learning program that would do just that. He hopes that in the next year and a half he’ll have something for at least a handful of the species in North America. Tech like this will only become more important as ornithologists are able to gather more and more data.

“Technology miniaturization, and the miniaturization of particularly batteries, is currently leading a revolution in geo-locator size,” Tingley says. New tiny geo-locators can record where a bird is at the beginning and end of each day by recording the level and angle of light. This lets biologists know generally how birds are traveling. Right now, the catch is that the birds have to be recaptured in order to get the information from the tags.

But there’s an international network of radio towers springing up to get around that problem. The MOTUS project, from Bird Studies Canada, uses nano-tags that transmit unique radio signals to track individual birds as they migrate around the world (pictured above tracking Red Knots between 2014 and 2016, courtesy of Bird Studies Canada’s MOTUS Wildlife Tracking System, with contributions from collaborators).

“It’s this hugely collaborative network, so if a bird that I put a tag on passes by someone else’s radio tower, I get that data,” explains Zoe Crysler, a data technician and coordinator for the MOTUS network. “So instead of relying on the five towers I can afford to put up for my project, I have access to stations all across North America, South America, Europe, and Australia is also starting a network. That’s really the benefit of the nano-tags.”

All of this technology—the nano-tags, the live radar, the nighttime noises—will all hopefully feed into the ultimate big picture. “This is what George Swenson, the old radio astronomer told us,” Martin Wikelski, an ornithologist at The Max Plank Institute for Ornithology says. “We have this map of the universe, and we have areas where stars are disappearing and the birth and death of stars. And we don’t have that for the Earth. We don’t know where the sinkholes are for life and where are the sort of blooming areas.”

That’s where ICARUS comes in. The radio telescope will beam down towards Earth from the International Space Station and pick up geolocators on migrating animals. The first part of ICARUS has already been installed on the ISS, and the final spacewalk to turn on the radio antenna is scheduled for August of this year. “We are flying ICARUS, not close to the sun, it’s in low-Earth orbit, so that’s good,” Wikelski says with a laugh. “We will finally give ICARUS wings.”

With the continued help of citizen scientists, who may soon be attaching miniaturized fitness trackers on birds, Wikelski and his colleagues are hopeful that their studies will finally come together. “We want to go from the local scale and the local movement, and also connect the biodiversity to it,” Wikelski says. “We want to link all of this together. This may really change [our understanding of] ecology.”