It’ll be more efficient than the real thing, but that’s not saying much. 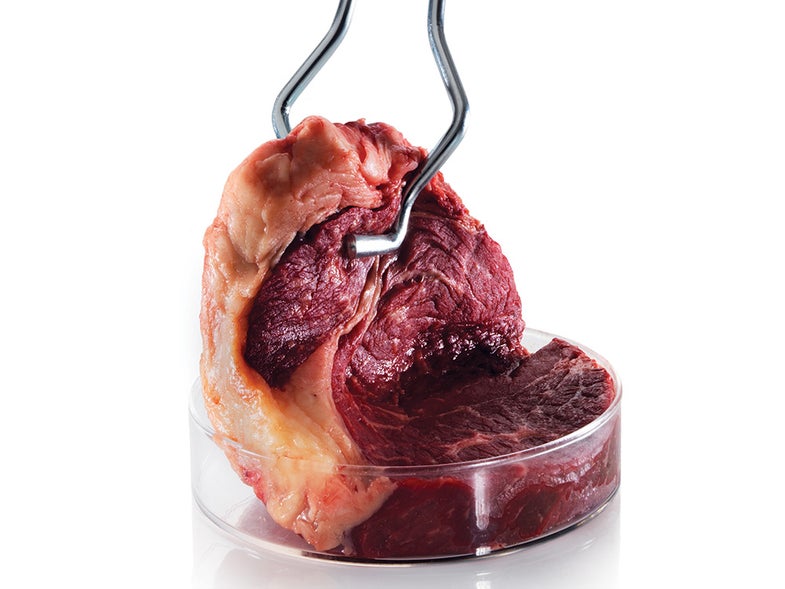 About 14.5 percent of our ­greenhouse-​gas emissions come from livestock. But what if you could eat a burger without having a cow?

When Mark Post grew the first lab-made beef in 2013, the patty (“close to meat but not that juicy,” according to one taste tester) cost $330,000. The speculative price of a frankenburger is now a much more palatable $12, and some startups say mock meat will hit shelves within a couple of years.

Plants will most likely always be the greenest protein, but cultured meat could at least become more sustainable than flesh grown on the bone. Here’s how some ­estimates say it will shake out in land and water use, electricity, and emissions.

Making a metric ton of lab-grown protein wouldn’t require much land, according to researchers Hanna Tuomisto and Avijit Roy. But the 2.6 fields taken up cultivating the same protein from fava, kidney, or black beans aren’t wasted: These crops help keep fields healthy by storing nutrients in soil. So we’ll call that a draw.

Our beef-cell bounty’s energy demand could run a whole town’s worth of power-hungry appliances for a year, which is more than 10,000 fridges better than the bovine equivalent. Ultimately, though, field beans slurp up far less juice than those meatier options: just 1,500 chillers or so.

Our cultured meat would emit a barbecue tourna­ment’s worth of greenhouse gas. That’s less than one-tenth the emissions of real beef, but more than double the amount of soybeans, a vegan fave. On the other hand, products like tofu require further processing, which means more gas.

Lab-grown chow would use 713,265 gallons of water; more than 200 times what you send down the toilet annually. A metric ton of old-school bovine protein takes 16 million swirlies. Water is dwindling and agriculture does most of the guzzling, so test-tube tartare might be worthwhile for bean discounters.