Tank in trouble? The Army can just 3D print the part.

What 3D printing, robots, and a tank all forecast about the future of battlefield logistics. 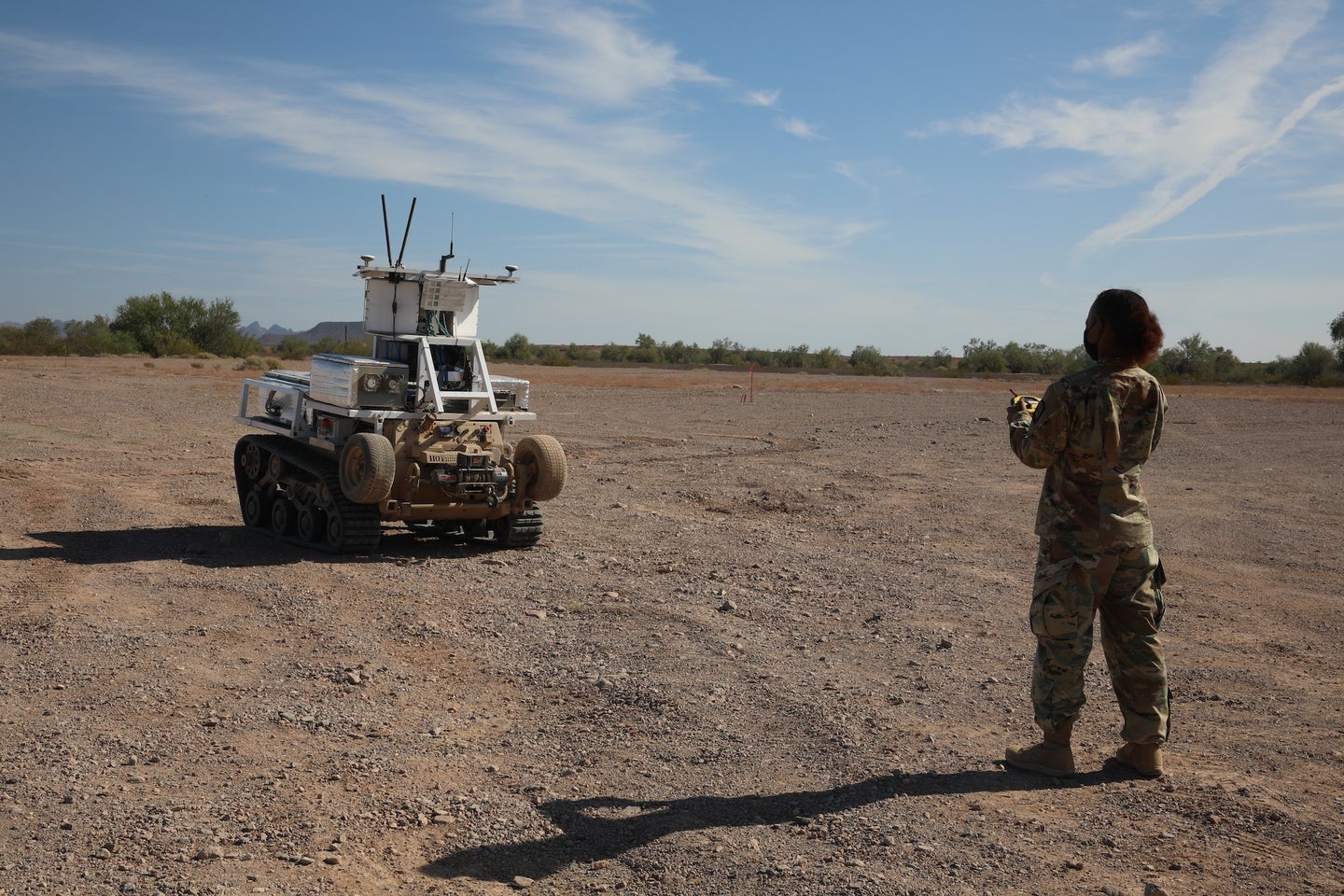 War is friction, sometimes literally. When the wear and tear of use causes a part to break in the field, commanders hope they have a spare. If not, they must either plow ahead with broken equipment, or leave machines behind as they wait for repair. In the harsh desert of the Yuma Proving Grounds, during an Army project exploring future tech, commanders tested a new alternative: 3D printing a spare part on demand and using semi-autonomous robot delivery to get that spare to the tank in need.

The ongoing exercise is Project Convergence 21, which began the first week of October and is scheduled to run through the middle of November. For the event, the Army is joined by components from the Navy, Air Force, and Marine Corps, with elements taking place at both Arizona’s Yuma Proving Grounds and New Mexico’s White Sands Missile Range.

In this case, when a tank needed a new part, soldiers in Project Convergence turned to 3D printing. The capability, described in a military acronym, is called “Rapid Fabrication via Additive Manufacturing on the Battlefield,” or R-FAB.

At the heart of R-FAB is a printer that “has the capability to print stainless steel composites and some plastic things,” said Melanie Smith, a capabilities director for the US Army, in a video release. “3D printing gives us an ability to print parts forward, whereas we may not have them readily available or may not be able to get them in the supply chain somewhere in combat or far forward.”

In 2012, the Pentagon set aside $60 million to invest in additive manufacturing, and those results are tangible in demonstrations like Project Convergence.

Printing parts close to where they are needed, as they are needed, is the kind of behind-the-scenes advance that matters a great deal in a protracted fight. There are plenty of spare parts that can be carried or brought close to where soldiers operate, but sometimes parts break without a spare on hand or nearby. This problem is true especially on ships, but it can apply equally well to operations on land. If there isn’t a spare part, devoting some space to a printer and malleable material means the part can be made on demand.

“During Project Convergence 21, Soldiers are experimenting with the semi-autonomous resupply process,” said Army Futures Command in a release. “Communicating with a base of operations, the tank operator was able to describe his location and the part needed, and personnel set to work quickly to obtain the part. They did this by 3D printing the piece using a field-ready 3D printer capable of producing both plastic and metal objects. As this process is refined, resupply of needed parts can often be printed right in the field.”

Once a part is made, getting it to the tank in need becomes a task all its own.

Soldiers with the 82nd airborne used tracked Expeditionary Modular Autonomous Vehicles, or E-MAVs, to demonstrate semi-autonomous scouting and re-supply on the ground. The E-MAV was already tested by the Marine Corps as a possible way to retrieve the injured or dead from the battlefield, and many of the same principles apply to supply delivery. By not risking an onboard human driver, a machine can travel under fire and only increase the survivability of the crew in need.

Once in place, a tank crew or nearby friendlies could remove the printed part from the E-MAV and set about getting it in place. It’s not as fast as immediately having the piece on hand, but this entire process offers a much quicker turnaround than waiting for resupply from an in-theater warehouse or further away.

By making the process semi-autonomous, the robot vehicles not only spare an onboard driver, they mostly spare the energy and attention needed from a remote human pilot.

While 3D manufacturing for spare parts isn’t the showiest part of the Army’s big exercise on networked warfare, it only works because of the infrastructure in place at Project Convergence. It’s this network that allowed the tank crew to name the part, the printers to make it, and that let the re-supply vehicles travel semi-autonomously to the tank’s location.

Future Projects Convergence will incorporate units from allied militaries, allowing the Army to test communications across national barriers and on equipment not in the US inventory. These tests will showcase weapons and maneuver and new machines. When those machines break, as all machines may eventually, the ability to print parts on demand could mena the difference between abandoning a tank to save its crew, and wheeling the tank out of danger under the cover of night.