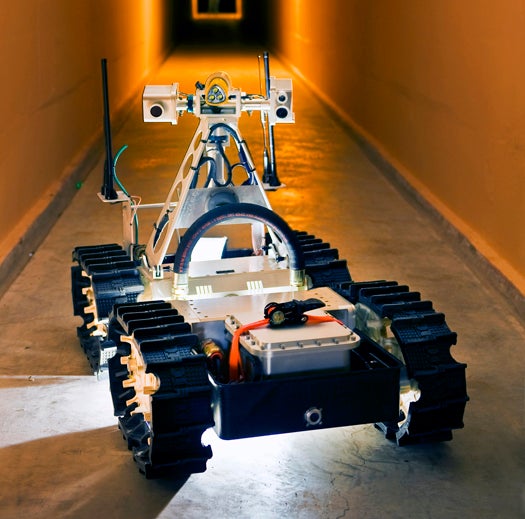 At AUVSI’s (Association for Unmanned Vehicle Systems International) massive robot conference in D.C. this week there is no shortage of robots designed to seek out–and in some cases destroy–human targets. Sandia National Labs chose to go in the opposite direction with their Gemini-Scout, a remotely controlled rolling robot designed specifically to lead search and rescue efforts in the event of a mining disaster.

When mines collapse, the biggest hindrance to a speedy search and rescue operation is the lack of information. Mining accidents generally bring about a buffet of dangerous conditions: structural weaknesses within the shafts themselves, poisonous vapors, explosive gases, flooded tunnels, etc. Rescue crews can’t charge into such conditions without proper reconnaissance, lest they risk compounding the situation by creating a second disaster on top of the first.

Gemini-Scout is designed to cope with all of these things so it can get down into a mine quickly, searching for survivors and assessing threats so human searchers can get into place as quickly as possible. Its tracked propulsion and articulated suspension allow it to climb rubble piles and crawl over uneven terrain. In the ground demo area at AUVSI, Gemini rolled easily over stair-like obstacles and into the sand and gravel pits, turning tight circles and kicking up a mess before climbing out just as easily. It took 45-degree climbs with no serious problems, and at less than two feet tall it maneuvered through tight spaces with ease.

But more specifically to its purpose, Sandia engineers explained, Gemini-Scout can move through up to 18 inches of water while sampling the air for toxic fumes (technically it can operate through deeper water, but doing so would immerse the air sensors on its mast). Those air measurements are critical because the data they collect paves the way for manned rescue operations. They also let rescue personnel know if they are dealing with explosive methane gases or other flammable vapors.

To that end, Gemini-Scout’s electronics are packed in explosion-proof casings. A blast triggered by something else might disable the robot, but its own electronics won’t provide sparks that could trigger a second explosion and complicate a search and rescue operation.

A thermal camera helps Gemini-Scout search for survivors and two way radios allow handlers to communicate with any survivors the robot locates. The ‘bot can even be configured to carry food, air tanks, or other supplies to trapped miners, or to drag them to safety.

And because mine disasters can happen unexpectedly anywhere in the world, Sandia engineers wanted to make it operable by just about anyone. Gemini-Scout is controlled with a standard Xbox 360 remote, so virtually anyone comfortable with Call of Duty can answer the call of duty in a time of crisis.