When DARPA launched its Transformer (TX) program back in early 2010, PopSci responded as most media did by applauding the... 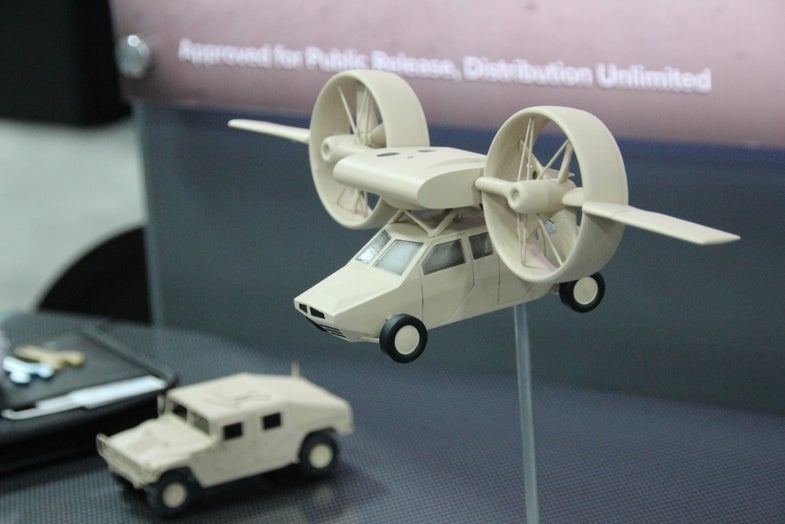 When DARPA launched its Transformer (TX) program back in early 2010, PopSci responded as most media did by applauding the ambition while simultaneously harboring serious skepticism. In essence the DoD was asking for a flying car, a “1- to 4-person transportation vehicle that can drive and fly,” capable of vertical takeoff and landing (VTOL), for troops looking to avoid rough terrain and IEDs. The very idea simply feels impossible–at least until you have a sober conversation with the guy building it.

“Weight is the number one challenge,” says Kevin Renshaw, program manager for Lockheed Martin’s Transformer development team. He says it like he’s designing a better golf club or a faster race car, simply tweaking something that’s otherwise a foregone conclusion. Actually, he says, weight is the number one problem after cost, which is difficult to contain when you’re trying to invent science fiction from scratch on a tight timetable. His team has designs to address the weight concerns, he says. Executing them within realistic budget constraints is another thing.

Lockheed’s design, like that of the other development team pursuing the Transformer contract at AAI Corp. (a unit of Textron Systems), is exactly that: a design. Neither team has actually begun building a prototype of its envisioned vehicle, though both have brought scale models here to AUVSI’s Unmanned Systems North America expo that are getting a fair amount of attention. This is the first time Lockheed personnel have talked openly about the status of their program (PopSci approached AAI about this at the unmanned systems show as well, but representatives there chose to remain silent on the issue beyond acknowledging that yes, the company is very much still in the competition, and yes, its design is viable). 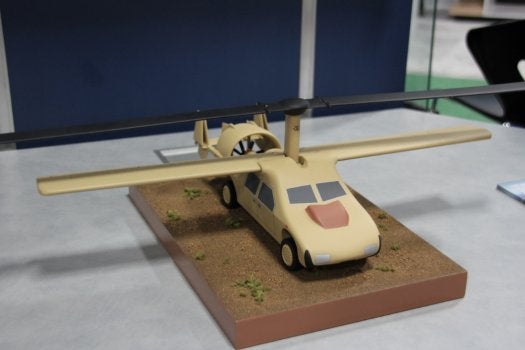 It’s a good time to conduct a little PR. Both Lockheed’s and AAI’s projects recently passed a preliminary design review by DARPA, one that included computer modeling of the designs. Both designs passed muster. From an engineering perspective (albeit a theoretical engineering perspective), the modeling didn’t reveal any show-stopping flaws in either concept. For Renshaw and Lockheed, that means that for now they are on the right track.

“The car portion is pretty straightforward,” Renshaw says of his team’s design, which relies on two huge turbo-shaft fans and folding wings fixed to a turret atop the cab to provide the lift and thrust for the vehicle in flight. “It’s the flight that will be challenging, but computerized flight–that’s what Lockheed Martin is best at.”

He’s specifically referring to the flight computer that is going to make the airborne portion of the vehicle’s operation almost completely automated. The vehicle is designed to carry Marine or Army infantry rather than trained pilots, Renshaw explains. He envisions something like an iPad mounted on the dash that allows Marines to simply plot their course on a GPS interface when they switch from surface to flight mode: “I’m here, and I want to go here.” With a flight plan entered, the fans then rotate 90-degrees on their turret from their stowed positions just in front of and behind the cab to their in-flight positions on either side of it. The wings extend, and the computer takes over. Marines onboard would be able to alter course mid-flight or order it to the ground in an emergency, but the actual control of takeoff, landing, and flight would be performed by the computer.

“We’re pulling the baseline logic from the STOVL F-35,” Renshaw says (referring to the jump-jet-like short takeoff/vertical landing variant of the fighter designed for the U.S. Marines). It’s by no means the exact F-35 software, he explains, but it’s the foundation of the Joint Strike Fighter’s flight computer reconfigured for the aerodynamic profile of a four-door car. Working off a principle known as dynamic inversion, it basically evaluates moment-by-moment where the aircraft wants to be next, and works backward to where it is right now to determine the proper way to transition between the two.

Of course, the F-35 is over budget, behind schedule, and riddled with challenging design problems–and it’s an actual airplane, something Lockheed has designed and built countless times before (to be fair, it’s an extremely complicated aircraft to build). The Transformer program expires in 2015, and that’s when DARPA wants to have a working prototype of its flying humvee (the agency will choose which of the two designs will move forward into the prototyping phase at the end of this year after a further design review). And while both designs have their merits and demerits–Lockheed’s would maintain a controlled hover while AAI’s would not; AAI’s likely has more design leeway in terms of weight (and potential up-armoring) while Lockheed has a lot of weight sitting on top of the vehicle–neither is going to be easy, or cheap, to build.

Renshaw describes the design process thus far as “a battle of details.” Each small problem requiring a small design tweak, and those often result in another small uptick in overall cost. When the program comes to fruition in 2015, the idea is that DARPA would hand it off to one of the military branches–presumably the Marines or the Army, or perhaps Joint Special Operations Command–but thus far no one has expressed overwhelming interest in shelling out for its further development.

The designs are marching forward and DARPA might just have its “flying car” in as few as three years. The question is: will anyone be able to afford it?