The Army’s launching drones from dune buggies. Here’s why.

The future is starting to look a little more like a G.I. Joe scene. 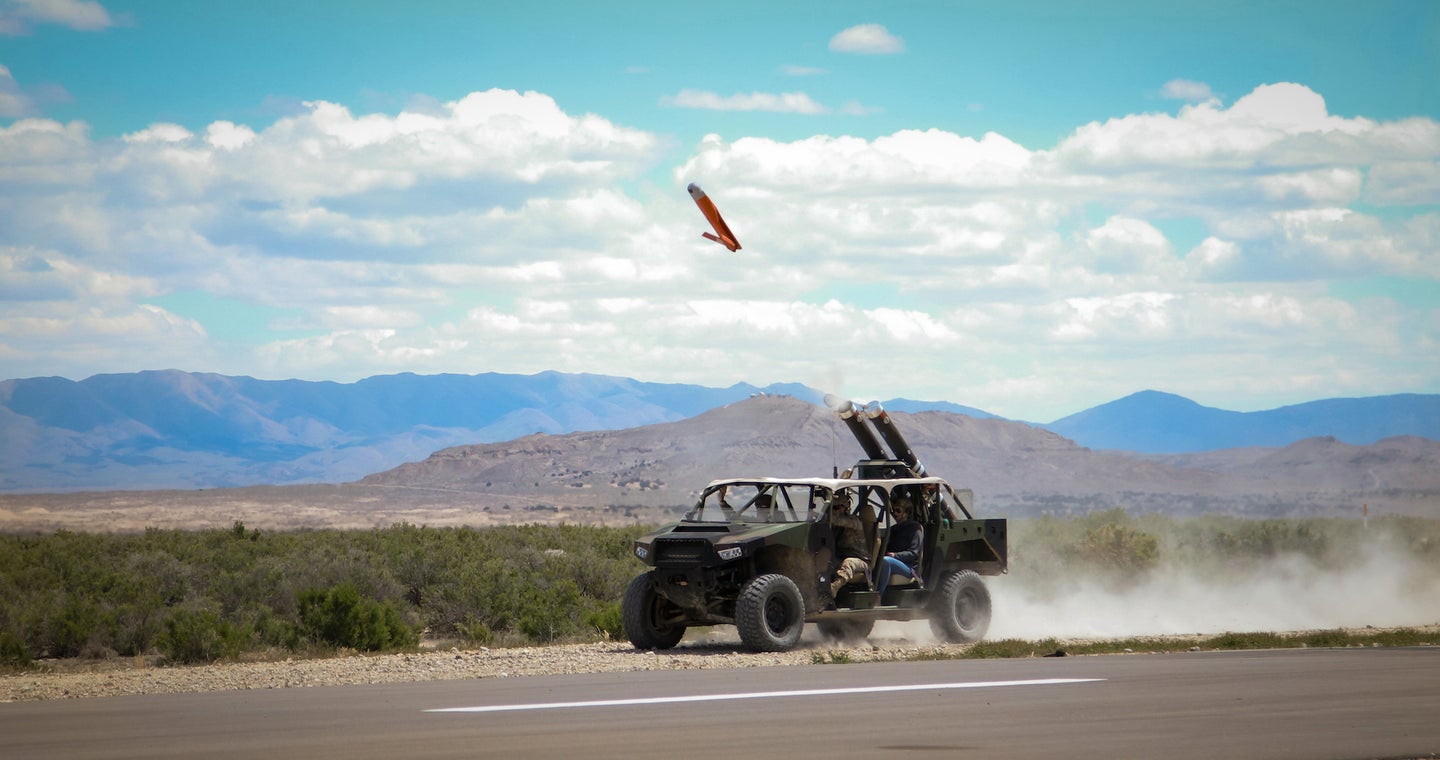 Southwest of the Great Salt Lake, on the sun-scorched sands of the Dugway Proving Grounds, the Army recently launched drones from a dune buggy. Part of a broader exercise exploring equipment for future war, the Dugway drone launch suggests at least two big possibilities. The first is that drones are now almost cheap enough to use like missiles. And the second is that, when it comes to novel weapons, the future could look as much like a scene involving G.I. Joe action figures as anything else.

Formally called the Experimentation Demonstration Gateway Event 21 (EDGE21), the exercise at Dugway ran from May 3 to May 14, 2021. There, stretches of desert were used as stand-ins for Pacific islands, a terrestrial exploration of how the Army might lend its power to amphibious combat.

Paratroopers wore Integrated Visual Augmentation System (IVAS) headsets, a Microsoft-built augmented reality system designed to layer useful information into a soldier’s field of view on the battlefield. Overhead transport provided reconnaissance, and soldiers on board Black Hawk helicopters were able to take in new information about the fight ahead of them as they moved into position.

Amidst it all, a pair of tube-launched drones on the back of a military-grade dune buggy captured attention online. The Army’s Future Vertical Lift Cross-Functional Team is tasked with finding ways to deliver soldiers to combat through aerial means, and on Twitter, the team shared a picture of a barely off-road buggy firing a drone into the sky.

The buggy is a Polaris-made DAGOR (for “Deployable Advanced Ground Off-Road”). It’s light enough to be transported by helicopter, and strong enough to carry up to 9 people distances of up to 500 miles. As The War Zone reports, the Army tested and decided against using the DAGOR as a standard military vehicle, though it still kept some models on hand.

The DAGOR wasn’t always slated to fire the drones. When the exercise was planned, Defense News reports that the Army was going to test tube-launched drones from Ford F-150 trucks. The 82 Airborne, which had the DAGOR unit, instead decided to put the drone tubes on the dune buggy. And not just launch them from the buggy, but launch the drones from the buggy while it was in motion.

Inside the tubes were ALTIUS 600 drones. Previously, the Army has launched ALTIUS drones from Black Hawk helicopters, and in this exercise expanded that repertoire to include the small C-12 cargo plane. The Air Force has also successfully launched an ALTIUS drone from a larger Valkyrie drone, showing that a human operator isn’t required for hurling a robot into the sky from the sky.

Looking like a matchstick with wings, the ALTIUS can be a scout, a human-directed missile, or even a counter-drone weapon, depending on payload. Those payload options are modular, too, so it’s possible that a unit could launch an ALTIUS as a scout, recover the drone, and then later mount an explosive payload instead.

Dune buggies are among the lightest of light vehicles, and they have no armor. That makes them especially risky vehicles to use close to enemies, so the ability to launch drone scouts can help buggy-mounted soldiers stay out of danger, while scouting to find out where they most need to be. That the same drones can become deadly missiles lets the dune buggies attack enemies at a safe distance.

While the EDGE21 exercise ultimately didn’t use the F-150 trucks, there is a certain appeal to a weapon that can be carried and fired from a sturdy commercial vehicle. When used by irregular armies and insurgents, trucks with guns or missiles are called “technicals.” By allowing otherwise unprofessional forces to move quickly across great distances, and to concentrate attacks on the weaker parts of their opponents, technicals shifted how militaries understood modern war.

Periodically the US military experiments with the concept, marrying ease of purchase with proven ability. Adding drones to the arsenal of truck-borne weapons, especially drones that can sometimes be missiles, means the Army could fight in a similar fashion, over greater distances, without sacrificing the heavier elements that can be slower to position.

Launching drones from a dune buggy is less about the buggy itself, and more about showing how easy it is for the Army to launch drones from a whole range of vehicles. In the way that missiles once transformed combat, cheaper drones that can fight like missiles may change the shape of future battles.