UE Megablast review: Still one of the best-sounding Bluetooth speakers 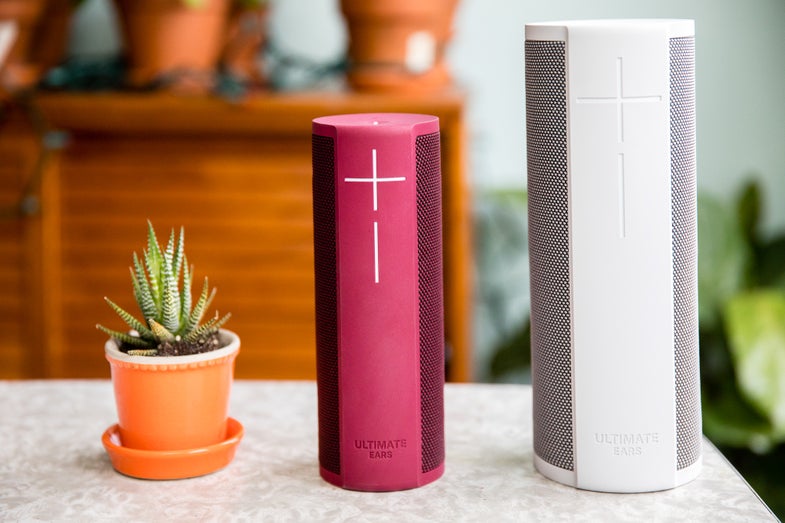 When it comes to Bluetooth audio, Ultimate Ears Megablast has a rather excellent reputation for making rugged, waterproof speakers with loud, clear sound. The Megablast (and the smaller Blast) uphold that tradition for UE, while also integrating Amazon’s smart assistant, Alexa. Even though these speakers have been on the market for a long time, they’re still some of the best-sounding Bluetooth speakers around.

An introduction to the UE Megablast and Blast

The Ultimate Ears Blast and UE Megablast are cylindrical Bluetooth speakers roughly the size of a tall boy or an Arizona iced tea can. They’re the same size and have a nearly identical form factor to UE’s Boom 2 and Megaboom 2 speakers, which are already on the market. Now, however, Alexa comes built into the Blast and Megablast, and UE introduced a base station to convert the speaker into an always-on device like the Amazon Echo.

Set up Connecting the Megablast speakers via Bluetooth is still insanely easy. When you turn on the speaker for the first time, it automatically goes into pairing mode, which is handy. Once connected, it detects whether or not you have the UE app installed on your smartphone and prompts you to download if not.

This is where things differ from previous UE speakers. The app guides you through a connection process to get the wireless Bluetooth speaker talking to your home Wi-Fi network using its built-in chip. It would be nice if if the app remembered the login info for future setups, but that only really comes into play if you’re adding more than one for stereo or multi-some audio.

This is also where you set up Alexa compatibility.

How smart is each Ultimate Ears speaker?

Right now, the Alexa integration on the Blast speakers is a little disappointing. The Ultimate Ears speaker’s primary function is music, and as of right now, you can pretty much only play audio from Amazon’s unlimited music streaming service (the speaker comes with a three-month trial). Spotify and Pandora are coming down the road, but the experience really feels lacking without them, so hopefully those are close on the horizon.

To use the Alexa function reliably, you’ll want to buy the $40 power dock, on which the Blast speakers can sit. It provides a steady stream of power so you’re not constantly draining and charging the battery. The dock is small and easy to use, but the speaker just sits on top of it, so my dogs tipped it over on more than one occasion. From a functionality standpoint, it’s a lot like using Amazon’s Echo Tap speaker, which uses a similar base.

While the speakers look identical co the Mega Boom 2 that came before, there have been some considerable hardware upgrades inside. In addition to the new Wi-Fi chip, the speakers now have microphone arrays around the outside so they can hear you calling for Alexa.

In terms of music playback, the MegaBlast received the biggest upgrade, pushing a full 40 percent more volume than its predecessor. The Megaboom was loud. The new Megablast is extremely loud. Even in my backyard, I didn’t need to push it to max volume to cover the whole area.

The smaller blast is more comparable to its predecessor but is more than capable of filling even a large room with sound.I’ve never really had a complaint with UE speakers in terms of sound quality and that’s still true here.

Battery life checks in at up to 12 hours for the Blast and up to 16 hours for the UE Megablast, which is more than I have needed so far. That portability, however, is one of the big advantages that the UE speakers have over the Sonos One, which is that company’s first Alexa-equipped model.

The Blast and Megablast are a IP67 certified waterproof speaker, which means you can fully submerge them and they’ll survive just fine. They’re also resistant to dust, drops, and your tipsy cousins knocking them off the deck at a barbecue.

The exterior has the familiar tight cloth mesh that comes in a variety of colors. The colors, in this case, are more muted than with other models like the adorable Wonderboom in order to better fit in with home decor, which is a good call if this is meant to replace an Amazon Echo.

Should you buy the Ultimate Ears Blast or Megablast?

Right now, there are two main factors going against the Ultimate Ears Blast and Megablast speakers. The first is the fact that they don’t yet natively support Spotify and Pandora. Amazon’s unlimited service is fine, and people are so ingrained into their preferred music services that switching is a big ask. However, both services are in the works and will come via firmware update. I genuinely look forward to being able to grab this thing off its base, head outside, and yell out songs for Spotify to play while I do yard work.

The second issue is the price. The UE Blast costs $229, while the UE Megablast checks in at $349. Then, you have to pay another $40 to get the charging base if you want to use it like a dedicated Alexa speaker. That’s a pretty hefty price puts the Megablast in direct comparison with the upcoming Google Home Max and Apple HomePod. That’s seriously stiff competition, even if the UE speaker has the benefit of portability.

Compared to the Amazon Tap, even the regular Blast offers a considerable improvement in sound quality—the Megablast is world’s apart. But, the Tap is just $129, which makes it a full $100 cheaper than the Blast, so if you’re not a stickler for fidelity and you don’t need the extra ruggedness offered by the UE speakers, it’s still hard to justify the extra cash.

If you can justify the price and wait for those services, you’re going to get an excellent speaker. Looking ahead, I expect to see a lot more speakers in this genre, but they will have a high hill to climb to beat UE.