The $400 speaker is surprisingly convenient. 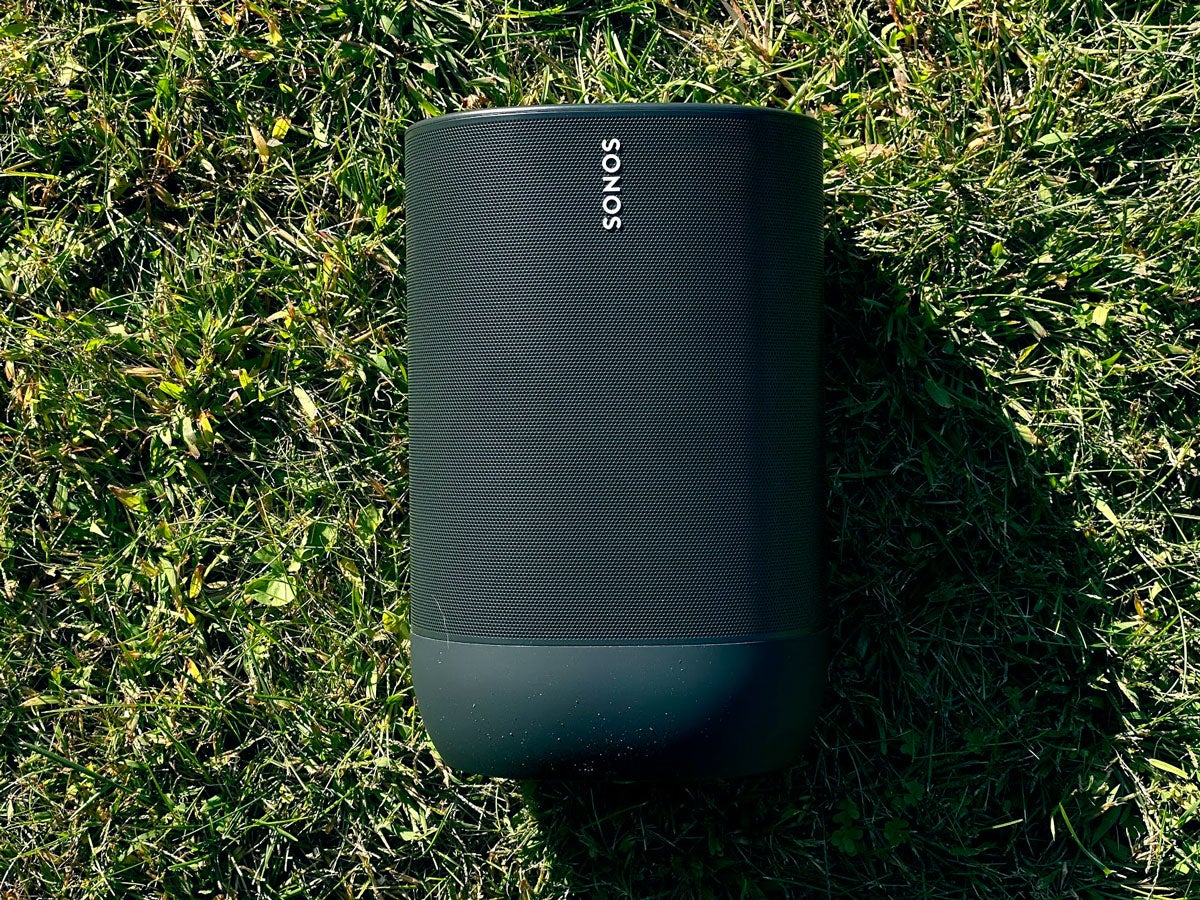 On paper, the Sonos outdoor speaker doesn’t make a ton of sense. The Sonos Move is a portable Bluetooth speaker that weighs six pounds and promises just 10 hours of battery life—when some of its competition claims more than double that number. At 10 inches tall and six inches around, it’s too big to easily stuff into a typical day bag or backpack. And it costs $400, which is extremely high if you’re only comparing it to other Bluetooth speakers.

Listen to music on the Move, however, and its purpose becomes much clearer. Inside your house, the Move works just as you’d expect with a Sonos product. It connects to networks and devices easily, it sounds great (more on that in a moment), and it even looks good in a distinguished way that eschews some of the loud graphic styling and flashing UFO lights some other companies seem to love putting on their portable speakers.

Ultimately, it’s probably not the Bluetooth speaker you want to bring on a camping trip where you’ll be away from a power supply over an extended period. But it’s extremely good when you’re in—or at least around—your house.

How does the Sonos Move sound?

This is a key consideration because if you don’t really care about sound quality, you probably shouldn’t even really consider the Sonos Move. There are cheaper options that are more portable and can survive full submersion underwater—the Move is IP56 certified, which means it can endure heavy rain, dust, and even sun exposure, but not a full dip in the pool. That kind of ingress protection requires more seals, however, and Sonos wasn’t comfortable with the negative effect it would have had on the overall sound.

Under the Move’s grill, you’ll find a single mid-woofer that faces out from the front of the device, as well as a downward-firing tweeter. A contoured plate in the bottom of the speaker directs sound from the tweeter out into the world to create a listening area that’s even, but directional. Many portable speakers, like the excellent Ultimate Ears Boom and Blast series, spit sound in almost every direction to try and fill up a party.

This may not sound like an important detail, but when you consider how much power the Move puts out, it’s crucial to consider. I put the Move against the fence between my yard and my neighbor’s. At roughly half volume, it was plenty loud to fill my yard. I asked my neighbor how she felt about the volume on her side of the fence and her exact response was, “You’ll have to make it a lot louder than that before I’d call the cops.” Listening from the neighbor’s yard myself, I was impressed by how little it spilled over. It performs as promised.

Sonos claims that it’s using the same audio hardware to process the sound whether you’re using Bluetooth or the more typical Sonos Wifi connection, so there’s no difference in sound quality. That assertion rings true to me. If there is a difference, my ears didn’t pick up on it.

Connecting to Wifi, however, does get you some benefits over Bluetooth. For instance, Sonos debuted its new AI-powered sound calibration platform in the Move, but it will only work over a standard Wifi connection. Typically, setting up the Sonos Trueplay adaptive sound feature requires walking around your space with your smartphone while the app records and analyzes sound from the speaker. This allows this Sonos speaker to calibrate its output to match your room and cut down on distortion. The Move, however, doesn’t always stay in the same place, which makes this process unproductive. So, the speaker listens to itself, then adjusts on the fly for optimal performance.

It takes a few seconds for the change to kick in, but you can sometimes even hear the change as it happens, especially if you put the speaker in a particularly challenging location like on a bookshelf or in a tight corner that’s prone to echoes.

In short, it sounds excellent, which is as you’d probably expect from a Sonos Move speaker.

Is it really a portable speaker?

If you’re looking for a portable speaker to bring on camping trips with long stretches away from the grid, then this isn’t the speaker for you, and it doesn’t claim to be. However, I found the portable nature of the Move way handier than I initially expected.

The chunky handle carved into the back of the speaker makes it easy to carry without dropping, even when you’re holding a fresh-off-the-smoker pork shoulder on a plate in the other hand. I regularly carried the speaker out into the yard and it maintained its wifi connection, which made it work just like it would inside the house, including the voice assistant features. The ring-shaped charger allows you to lazily plop the speaker onto it when you come in the house without having to plug in a cable. Inside and around the house, the Move is fantastic.

When I took the Move to the park, however, it was just fine. The sound quality is still excellent, but lugging it beyond the confines of my yard made the weight and size seem silly most of the time. Though, when an errant volleyball failed to knock it off the picnic table on which it was sitting, the extra heft came in handy. Take that, sports.

Who should buy the Sonos Move speaker?

The Sonos Move is expensive, over-engineered, and generally pretty great. The sound quality is excellent, which isn’t a surprise, and it also has some nice touches like a replaceable battery to extend the product’s lifecycle. Sonos has also said that this is just its first foray into this product segment and more products are likely coming down the line.

If you never plan on moving the speaker around, you’re probably better served by a typical, plug-in Sonos speaker like the Sonos One, which costs half the price. But, if you’re willing to pay the extra cash, and you don’t need something to take on long trips, the Move more than earns its keep by pumping out great-sounding music in and around your house.