Let’s see what Samsung has up its sleeve for this year. 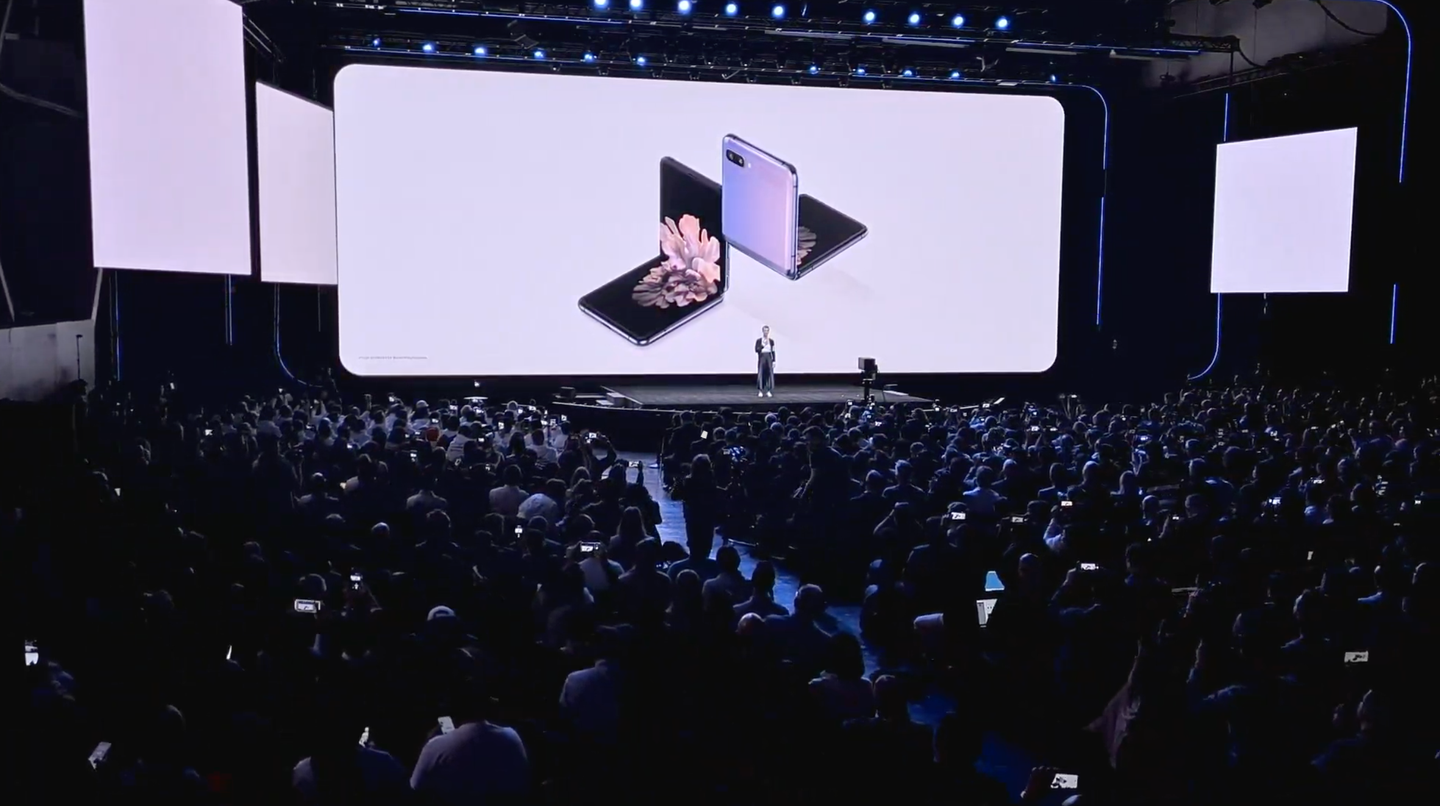 If you follow the tech press at all, you probably have a pretty good idea about what Samsung has planned for today’s Galaxy Unpacked event in San Francisco. It looks like we’re getting a new, smaller folding screen phone called the Galaxy Z Flip—we even caught a sneak peak of it at the Oscars—as well as a new flagship phone in the form of the Galaxy S20.

But, these events typically encompass a lot more than two products. So, feel free to click on the live stream embedded above, then scroll down for all the news as it happens and some crucial context and commentary.

Samsung starts the event talking about the Galaxy Fold. “It was the first entry in an entirely new era of smartphone history.” With that, the Galaxy Z Flip is official.

The new Flip Z comes in black, mirror purple, and—in some countries—mirror gold. It folds in half to fit in your pocket and then flips open to reveal a 6.7-inch screen that’s very tall. The screen is made of foldable glass. Samsung says it’s tested to 200,000 folds in terms of durability.

In addition to the fully open and clamped closed positions, Samsung introduced Flex Mode, which splits the display into two distinct parts. So, you can multitask and do things like watch a YouTube video while commenting on it. It also helps to position the camera for taking selfies.

The new hinge has a “fiber shield” that fills in the gap that appears around the hinge when you open and close the phone. It’s designed to keep the particles out that may otherwise climb under the screen and break everything like we saw with the Galaxy Fold. This is good for people like me who have kids (or love snacks) and constantly have crumbs floating around.

It starts selling on Valentine’s day and it will cost nearly $1,400, which is a lot, but that’s not a total surprise. The crowd isn’t sure how to react to that price.

The small screen on the front of the device is useful—it will feed you alerts and even work as a tiny live view screen if you want to shoot a selfie. Still, it’s so small. It’s unclear if people will think that’s an advantage or a disadvantage.

Now, we’re moving on to the more bread-and-butter Samsung gadgets. According to Samsung, consumers want “more multitasking,” which is why the Galaxy Fold showed up. We’re starting to hear about 5G as well. Next-generation wireless is clearly going to be an emphasis here for the company.

There are three new models of S20, including the original version, the S20+ and the S20 Ultra.

“This is the year of Galaxy 5G,” makes sense in Samsung’s gameplan. Once consumers figure out what 5G actually is, this will be important to them.

The camera takes center stage for the Galaxy S20. The main sensor boasts 64-megapixels, which is a ton. Space Zoom mode emulates 100x zoom, which lets you crop in very hard on your frame. The camera draws on AI smarts to automatically capture different versions of the scene with its various cameras and lets you choose later. It’s picking the “best” shots, which is a popular thing for AI to do here in 2020.

The S20 will shoot 8K video, which gives you more resolution than you need since you almost certainly don’t have an 8K TV or display in your house. Samsung would like to sell you an 8K TV, however, which is convenient.

Even if you’re not watching 8K footage, the extra resolution can be helpful. It allows the software to add more effects, like noise reduction, without losing as much detail. That means the footage will look cleaner in the finished product, even if it’s not displaying in native 8K.

The Galaxy S20 Ultra is the photo-specific model. It has a 108-megapixel AI camera. It promises larger sensors and AI HDR functionality that takes just 1/10th of a second to mash together. The camera uses a folded lens to give it 10x optical zoom, which you can extrapolate into a 100x zoom effect. It won’t look perfect at 100x, but this is a new area for smartphone cameras to venture into.

You’re almost never going to use 100x zoom because it’s extremely hard to handhold without everything getting extremely blurry. The 30x zoom, however, seems more reasonable, even if it will still be tricky. People are going to buy more phone tripods to take advantage of this.

Samsung is using the S20 phones to actually film and livestream its event today. The company clearly has a lot of faith in it. It’s weird to see the phones tucked inside the elaborate cranes, gimbals, and shoulder rigs the pro shooters are using in the venue.

Samsung is officially partnering with Netflix on the S20. Samsung users will get bonus content from Netflix originals. The content creators will make content with the S20 and then people can watch it on S20s.

All three S20 models have a 120 Hz refresh rate, which will mean much smoother motion. This is actually a pretty huge deal for smartphones. The screen is a dynamic AMOLED and Samsung partnered with Microsoft to bring a new Forza game to the devices. They glance over the cloud gaming solution (Microsoft xCloud), saying we’ll hear more about that later this year.

The new updated wireless earbuds have two speakers—one low and one high—but use a similar form factor to the previous model. They have three mics to optimize performance during calls. They use wireless charging and have an 11 hour playtime. Just three minutes of charging will get you an hour of playback, which is good for people who constantly forget to charge headphones before going into the gym (which literally happened to me today).

Google is talking about the tight integration of its software into the new phone. Live Caption is coming to the S20, which is a first for a partner phone. Google’s video chat app, Duo, is also baked into the S20. Samsung has been getting cozy with both Microsoft and Google in recent years, so it’s not surprising to see even more cooperation.

With that, the event is over. No smart speakers or any surprises here. We’re looking forward to getting some hands-on time with the phones in the coming weeks.