Get a closer look at the powerful hardware inside the upcoming PlayStation 5. 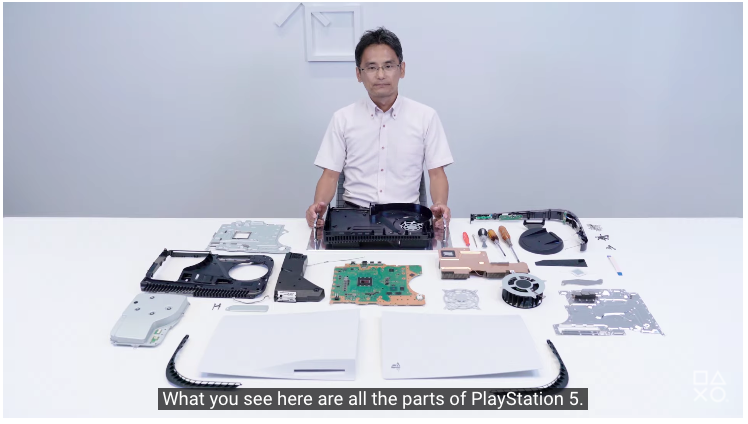 Sony first unveiled the final design for the upcoming PS5 console just a few weeks ago. Today, the company posted a 7-minute teardown video that gives curious gamers a look at exactly what’s happening in terms of hardware inside that swoopy exterior.

Yasuhiro Ootori, VP of Sony’s mechanical design department, gives the thorough presentation in Japanese, but you can enable English subtitles to read along if you’re not familiar with the language.

While Microsoft has sent out some new Xbox units to prominent YouTubers and content creators, we haven’t gotten this good of a look at the PS5 just yet. According to the video, it’s 4.1 inches wide,  15.4 inches tall, and 10.2 inches deep, which makes it a chunky bit of gear. The hardware doesn’t take up all of that space, but Sony has clearly left lots of room for airflow and a massive cooling system to help offset the enormous amount of computing power it’s cramming into a box much smaller than a typical gaming PC.

In the past, opening pretty much any part of a console’s case would void the warranty by breaking a piece of protective tape to show that someone has been tinkering inside. That’s still the case with the PS5, but users can remove the white side panels to get at the dust traps inside. There are two dust traps on each side that can be emptied by vacuuming.

There’s an air intake on each side, and the entire back of the machine is vented to funnel hot air away from the delicate components inside. The front of the device has a USB-C as well as a USB-A port, while the back is equipped with two USB-As, an HDMI out, a LAN port, and the power socket. There’s no optical audio out for the three other people out there besides me who care about such things.

Once you’re under the tamper-proof seal and inside the machine itself, there’s an x86-64-AMD Ryzen Zen 2 processor with 8 cores and 16 threads running up to 3.5 GHz. The GPU runs at 2.23 GHz and delivers 10.3 TFLOPS, which is a huge leap from the current generation PS4 Pro.

The massive 4.7-inch fan has vents on either side of the machine so it can pull in enough air to keep things cool inside. On a more granular cooling level, Sony has added a thermal layer between the chip and its heat sink to make cooling more stable—the company says this took two years to develop.

Ultimately, it seems like Sony has gone to great lengths in order to make the internal components accessible and easy to repair. We won’t know where the system’s weakest points are until consoles are sitting under TVs in real world situations where even the best-laid cooling plans can be thwarted by dust or other environmental variables.

Sony has also added several noise-reducing features including extra sheet metal and insulation around the disc drive itself in order to dampen vibrations. Less noise would be an upgrade since some older PlayStation models tended to produce subtle sounds similar to a jet getting ready to take off.

Lastly, we now know what’s involved with switching the PS5 between horizontal and vertical orientations. There’s a removable base that screws on and off with a single flat-blade screw. You can’t simply tip the machine over if you want to switch, but it seems like a quick process to swap out the base. Plus, considering the size of this thing, you’ll probably want to leave it in one place once you figure out where it lives anyway.