Although It’s Been Said Many Times, Many Ways: The iPad is the Future

I've been using the iPad since Saturday. Here are my thoughts and impressions so far 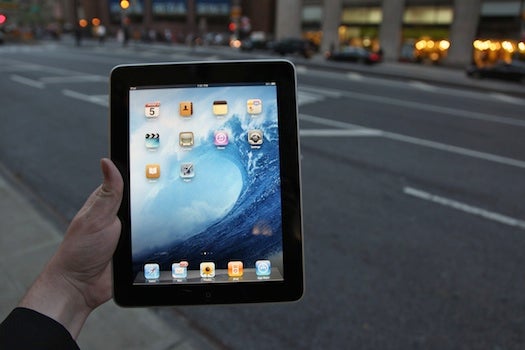 After a weekend using the iPad, I’ve realized I’m not interested in hedging my reaction to it with careful considerations of its lack of a USB port or webcam. It’s not every day, or every year or maybe even every decade that we’re able to see a piece of technology that takes a familiar human experience–here, using a computer–and fundamentally changes it. But that is what I think the iPad has done.

Maybe this is a honeymoon phase. Time will tell. But I don’t think it is. To support that, and because I know no one wants to read another monolithic 3,000-word iPad review running through every feature, what follows are some assorted notes and impressions from my first weekend of using this machine and how it pertains to the future of using computers. Some may be on the fragmentary side–please jump in the comments if you feel inspired to add to the conversation or would like to hear more.

It starts from the moment you pick it up and that obsidian black pool comes to life. On paper it’s not by any means the highest-resolution screen at 1024×768 spread over 9.7 inches of diagonal glass. Many netbooks pack a higher resolution into the same size. But somehow, it manages to be the most breathtaking screen I’ve ever seen. Maybe because there’s basically nothing else–an inch of black glass bezel surrounds it, rimmed by a thin lip of aluminum, but from the front that’s it. All screen. And its saturation and clarity is astounding.

And oh yeah, you can touch it. You can touch everything, and it reacts instantly. It’s fast. The glass feels cool and smooth on your finger, but after a while you’re not touching glass. You’re touching words, pictures, buttons, everything. The Internet. And everything responds.

Plenty of words have been written about the iPad’s touchscreen interface, and I can pretty much guarantee that none of them will mean anything to you until you use it. It just can’t be expressed. On paper it’s just a giant iPod touch. Yes, I’ve heard that a few times, even said it myself. But then it’s in your hand and you’re gliding your finger over your favorite websites, panning around the globe with your pinkie tip in Google Maps, feeling like a CIA analyst manning some future spy satellite terminal. It’s one brainstem-level pleasure after another; it reacts to some base human instinct to touch and manipulate something shiny put in front of us, and well, we can’t really argue with the brain stem, can we?

And that’s why it changes everything. The layers of abstraction are gone, and we’re interacting with graphical information in the most natural way possible. Apple’s unrelenting focus on simplicity means everything but the touch drops away.

Think about it–on your computer, interfaces are stacked inside each other like a Russian doll. The web site you’re looking at sits inside the browser, which sits inside a folder, which sits inside your operating system. Each interface has its own set of conceits and constraints, meaning the resulting experienced is subject to a great many rules dictating what it can and can’t be. But that’s not how it is on the iPad. There, a weather app adopts the perfect interface for browsing weather information–pinch and zoom on the giant world radar map; tap the forecast and current conditions blocks for more detailed pop-ups. You touch and it responds. And that’s just weather.

Like the iPhone, the iPad is a blank slate ready to morph into any device with any interface imaginable. It’s a million gadgets in one, with each able to express itself with the perfect interface. The hardware is designed to fade into the background, so in a way, developers are conjuring their software into tangible, concrete things that act, essentially, as hardware. The list of physical real word objects the iPhone has made irrelevant: cheap pocket digital camera, GPS navigator, e-reader, voice recorder, bicycle computer, iPod–the list goes on. The iPad, with a screen four times the size, will only make this list longer. 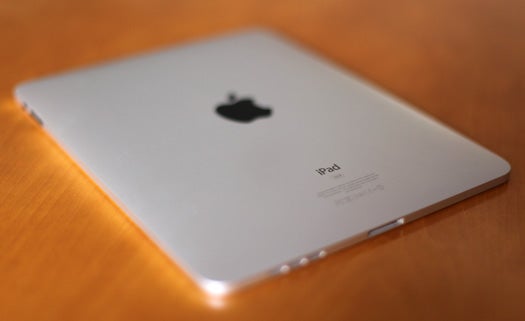 Using the iPad on the Toilet

Is so, so great. Apple’s case with its wedge-shaped lap stand is an essential tool here.

For more proof of how this is the future, connect any Bluetooth keyboard. Immediately, Apple’s Pages (the significance of which I’ve already written about) becomes the coolest word processor I’ve ever used. A word processor? Cool? But with Words and a wireless keyboard, you can enter text just like we’ve been doing for generations, and see it appear on a blank white screen. Then pick up this screen, turn it vertically, and add pictures and other formatting with your fingers. Touch a misspelled word and pick the proper correction. Even after a few days, I already know this is how I want to create anything made of pictures and text in the future.

I wasn’t going to honor the cliche of typing a review of a device on the device itself, but now that I paired up a Bluetooth keyboard i had in the cupboard, I can’t help myself.

Going From an iPad Back to an iPhone

Is hilarious. The same interface motifs put back on a tiny screen makes the proportions seem completely out of whack. Making the world’s most advanced smartphone look like a baby’s toy is something Apple can’t be excited about. This, more than anything, lends credence to the rumors of a new iPhone this summer with a higher resolution display.

Believe it or not, a gadget can change computing forever but still have flaws. Shocking, I know! Almost all of the gripes over what the iPad lacks miss the point, but the one that’s spot on? The iPad needs multitasking.

Not the multitasking we’re used to on the desktop computer. No task bar, no ctrl-alt-delete. Just a small, elegant way to tell us when we have a new IM or email while we’re reading Twitter or playing a game. The ability to let apps that play music continue to play it while we do other things.

Without this, one of the internet’s fundamental forms of communication–the instant message–is basically impossible on the iPad. This thing is supposed to replace the laptop you keep open while you watch TV at home, right? Well, what you do on that laptop is keep 12 browser tabs open and four Google Chat windows, responding to them at your leisure. Not possible on the iPad.

Something like Android’s pull-down notifications drawer would work. In fact, the iPad’s interface already hints at this–when a song is playing in the iPod app, you get a little play icon in the ever-present black strip at the top. It’s less than a centimeter thick, but that’s all it needs to be. Apple, open up that area to the SDK and let apps notify you of things there–with the iPad’s increased screen real estate, it’s time to turn the iPhone’s fairly puny background notification system into something truly usable.

Without it, I find myself flying around from app to app at an exhausting pace. Ironically, Apple’s rigid focus on apps performing one task at a time that actually, I think, reduces the focus you’re able to give any one app on the screen. I’d love to read Moby Dick on the iPad for free, but, NEW EMAIL! Someone has to have replied to my wittily provocative tweet on Queequeg’s mark by now, RIGHT? Tap tap tap. Book interrupted.

Do You Need an iPad?

No. As many others have pointed out, it’s just another device. But you/I didn’t need an iPod when they first came out either. When the iPod debuted, I was content to connect a tape deck to my computer to record the dozen or so MP3s I could suck down from Napster through my 56k modem during any given month. I just didn’t see the need because I didn’t have thousands of MP3s. The content environment was not yet ready.

The iPad is not without problems, some of which have the potential to make the Internet a less happy place than it is now. Yes, Apple’s well-documented closed system via iTunes. Apple is turning into a monopolistic recreation of the Hollywood studio system in the 1940s: if you need something done right, you work with us and no one else. But even then, there was more than one major studio. Not now.

This is bad. But fortunately for Apple, it’s bad in a way that creates an unbelievably pure and easy user experience on the iPad. (For more on this, see Joel Johnson responding beautifully to the closed system crowd).

The iPad presents a computing philosophy that not everyone agrees with: unrelenting simplicity at the cost of openness. But it’s hard to argue it’s not a perfect execution of that philosophy.