Is Astroneer The Next Minecraft?

Open-world resource collection and exploration on an interplanetary scale 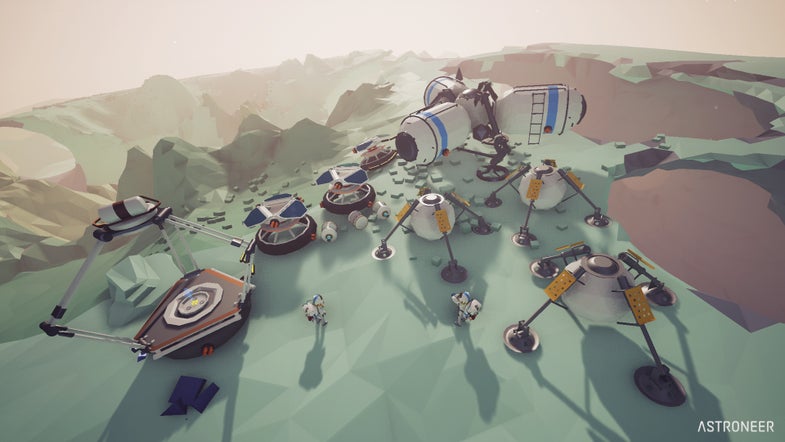 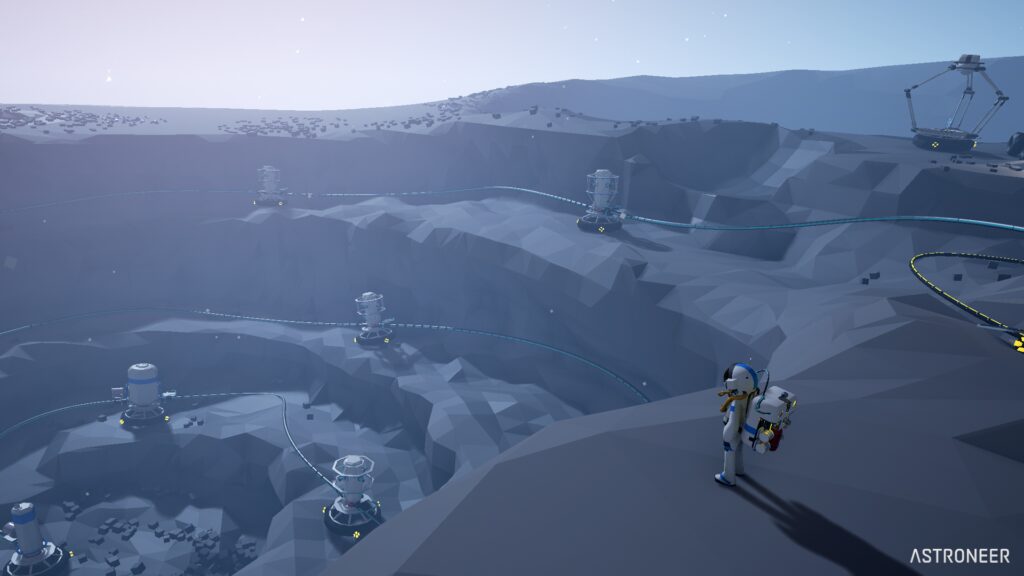 When Astroneer releases in early 2016, it will invite a lot of comparisons to Minecraft. Both are large, open-world survival games where players terraform a vast space to find resources and, eventually, build civilization. But System Era Softworks, the team behind the space exploration game, has a much bigger universe in mind, and if it can deliver on its promise it could leave Minecraft in the blocky, angular dust.

Astroneer’s concept is, of course, very similar to Minecraft. But instead of being a lone wandering character in the wilderness, you’re a lone astronaut on a planet. Here’s where things get bigger: The planet is one of many, and you could also be one of many.

It also comes from a different place: one that’s not about sharp polygons. 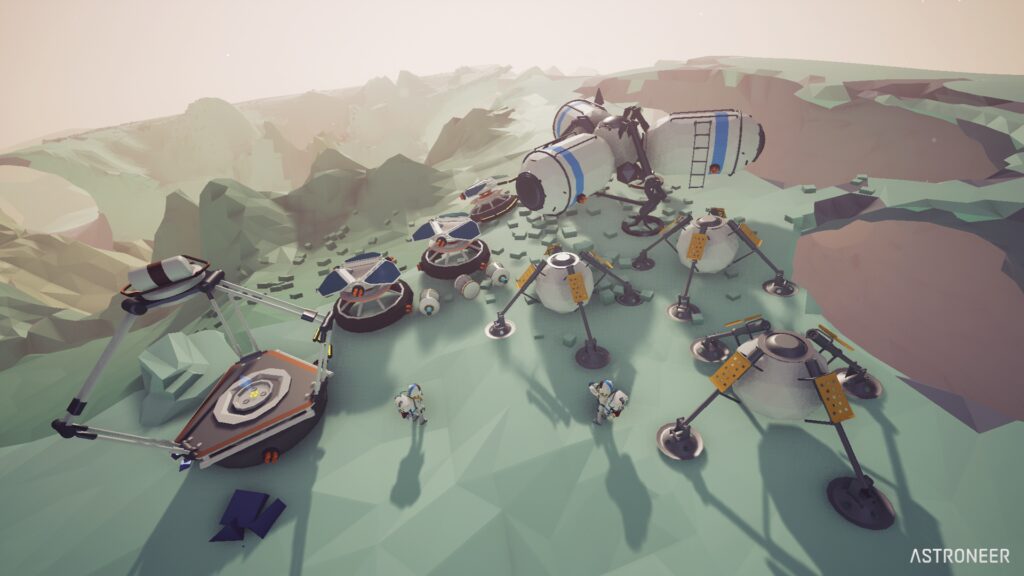 Like a lot of indy games, the idea began with a core design concept and only a couple of people–in this case just one. “Astroneer came from an art project I was working on in my spare time,” says creator Adam Bromell. “I wanted to tell the story of an astronaut, alone on an infinitely distant planet, where [the astronaut is] the key to human survival but [she] would have to eventually sacrifice [her] life to do be that savior.”

As the idea developed, team members were added. “We were all convinced immediately that building Astroneer is something we had to do,” he says. “It’s a video game we’ve wanted to play for years, and we’re going to be the ones to make it.”

Since the beginning, Bromell has wanted Astroneer to be a game that finds the perfect balance “between simulation and fantasy.” Player creativity is important, he says, so he and the other creators actively took fictional liberties and introduced things like terrain deformation and 3D interfacing.

The idea of walking the line between survival and building isn’t a new one, but interplanetary survival is definitely a new frontier. And terrain manipulation, as it’s seen in the trailer, looks like it will be an entirely new way of building.

The game’s terraforming has a completely different design aesthetic: As a loose metaphor, think airbrush instead of chisel. You’ll be sculpting viscous clay of terrain rather than stacking it.

This also means things are a bit more cartoonish. But Bromell says that doesn’t interfere with the real side of the equation. “We’re fine with the terrain being manipulated in a way that can feel a bit magical or the fact that an Astroneer can easily lift things three times his size so long as it supports the overall fantasy of being an Astronaut exploring and exploiting planets, far away from humanity.”

The other thing you may have noticed? No interface. Bromell says so far, “We have added no flat fullscreen UI interface. No menus or text to read. Everything happens in game and is a direct result of which objects you’re interfacing with. Since we are a third person game, this completely frees you to make quick modifications to the world while still feeling like you’re in the experience.” 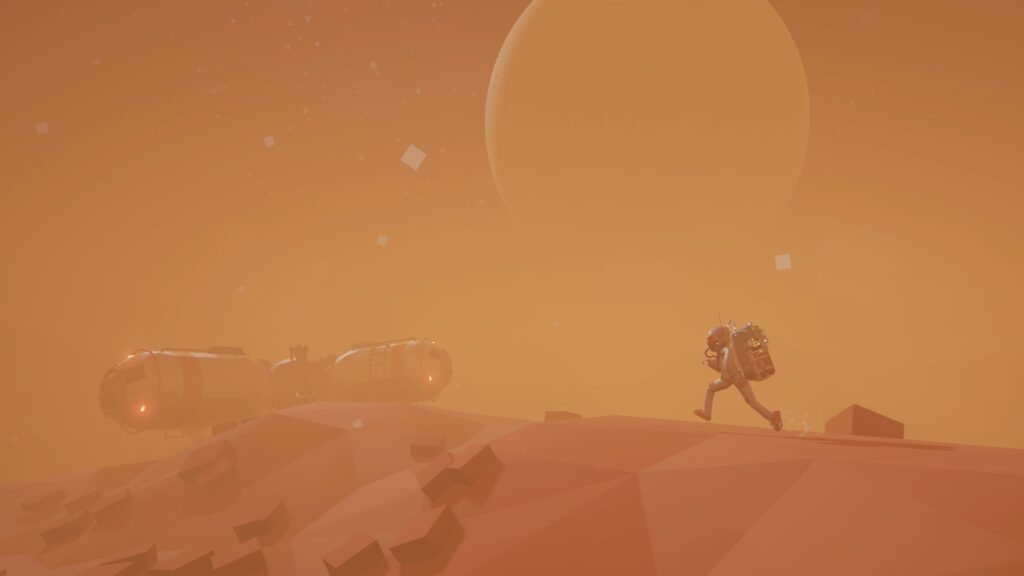 That may change, but it would be interesting for a play experience to essentially have no onboard or static heads up display. Bromell says that’s a good thing, at least for Astroneer. “Many first-person survival games become locked to a first-tier set of small interactions with the world, creating the dreaded “grind.” But third person allows the camera to zoom out to match the game’s progression.

Initially, an Astroneer must survive with very limited resources, managing small sets of resources such as oxygen and water. But later on, advanced players will be ferrying large cargos in spaceships, while still using the same third-person diegetic interaction scheme. We believe that these intuitive interfaces and forgiving progression schemes will allow a much broader audience to have access to an otherwise complex genre of sandbox games.”

One of the more common questions that gets asked when a new game goes for vintage aesthetics rather than realism, is intent. Bromell says the team “established early on that what we love the most about this low poly, geometric art style was that it easily complements the way we wanted to build the game.”

The Astroneer team, sort of like the guys from Minecraft originally, was sacrificing the potential of high-end graphics to get things done. Textures can take up a lot of time and manpower, and simplifying the aesthetics means more time can be devoted to mechanics. “We can quickly come up with the concept for something, spend an hour or so modeling it out, and get it in the game instantly.”

That hard-facts decision has actually played to their favor. There’s a chance you clicked on this story because the artwork caught your eye. Bromell says that’s been happening a lot, and it’s surprised him. “Something we didn’t anticipate from the art style but we notice more and more as we show more of the game is it really seems to captures the attention of people who may only see Astroneer in their Facebook or Twitter feed.” Bromell says people are drawn in by the near-cartoonish looks. “It’s big shapes and bright colors resonate with a lot of people and we take that into consideration with every new piece of game art that we create.”

When likening Astroneer to comparable titles like Minecraft, Pikmin, or the upcoming No Man’s Sky, Bromell is sure that Astroneer fits the genre. “Exploration and the sandbox nature of the game are intrinsically linked as they are part of a larger game loop. A player must build new equipment to survive on these alien planets and to find the resources to build bigger bases and vehicles they need to venture out further.”

Ultimately, though, Astroneer is built around that idea of endlessly grander adventures and excursions. As developers we are simply constructing the foundation for these mechanics…we’ll be very interested to see the different ways people end up playing the game.”

As for how the game will work, it’s clear that the player will have to resource hunt, terraform, and worry about things like oxygen. But he or she will also have to worry about different planets and their own unique challenges. “[Team member] Jacob has spent a considerable amount of time in ensuring that the technology we have gives each planet its own identity and challenges while also encouraging players to define what problems they’d like to tackle or what goals they’d like to have.”

But the biggest thing the game may draw in players with is cooperative play. “Friends who play together will be able to work together in the same physical space, solving problems together and interacting directly,” says Bromell. 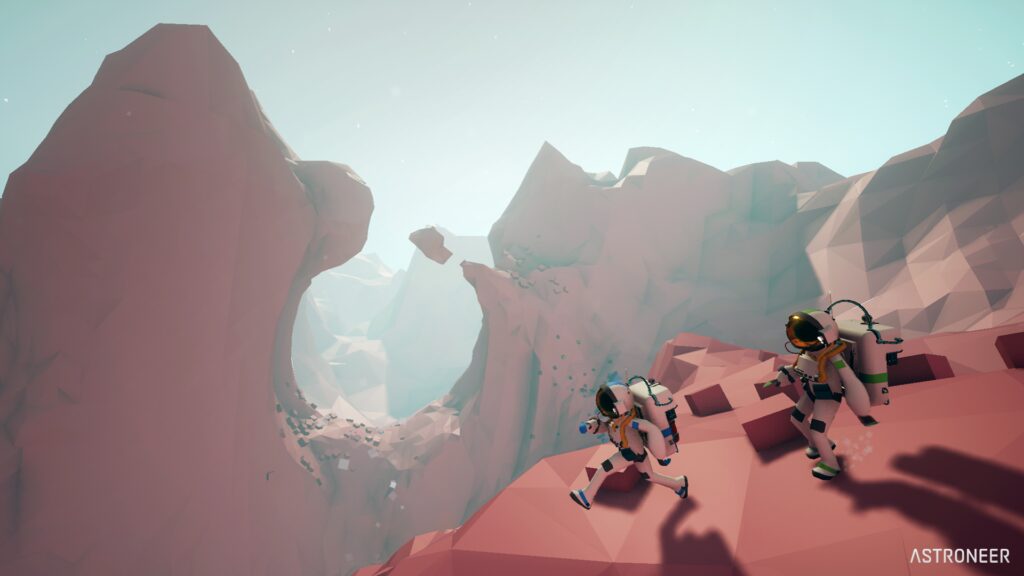 That’s not new to survival games, but here’s where it gets interesting: indirect cooperation. “Eventually, players will want to split up and work together while on different sides of a planet or even on different planets. Because the game allows players to seamlessly travel to or send resources to other planets, this creates a wide variety of emergent gameplay scenarios, such as when one player is running low on resources and must rely on [his or her] distant teammate to organize a resupply.”

You’ll just have to hope there’s someone there to help, if you need it.

“Many games offer seamless, traversable planetary systems,” says Bromell. “And many others offer synchronous co-op, but Astroneer marries the two in a way that creates a host of new, compelling shared experiences.”