We caught a preview of Sony’s odd, space-agey head-mounted viewer (appealingly named the HMZ-T1) back at CES in January, but... 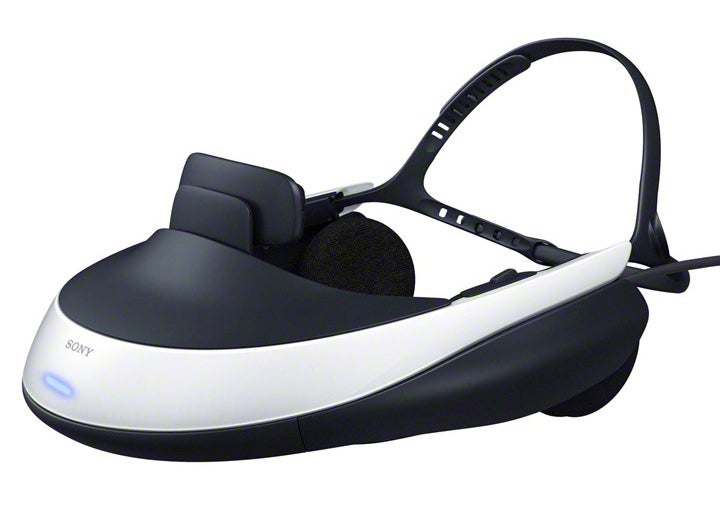 We caught a preview of Sony’s odd, space-agey head-mounted viewer (appealingly named the HMZ-T1) back at CES in January, but we were pretty surprised to learn that not only is it not a mere demo, Sony’s actually planning on, like, putting the thing in stores, where you can exchange currency for it and then take it home. Sony claims it offers an incredibly immersive 3-D experience, better than any TV. We’ve now played with it twice, and in some ways, that’s true.

The idea here is for a personal, extremely high-definition 3-D display. It looks something like a visor, and has two small screens (one in front of each eye) along with non-replaceable headphones. A cable, both for power and data, runs from the headset to a small black box, about the size of a Nintendo Wii, which in turn plugs into any gadget you want (though Sony would undoubtedly prefer you use a PS3 or Blu-ray player). It’ll cost somewhere between $750 and $800 when it’s released this fall, but the experience–for one person–should be a bargain, compared to buying a high-end 3-D HDTV and stereo.

The HMZ-T1 is particularly notable because its screens use OLED displays–OLEDs are increasingly used for smaller gadgets like smartphones, due to the screen tech’s clarity and deep, dark blacks, but get exponentially more expensive the bigger they get, to the point where the biggest OLED displays are only around 30 inches big and cost tens of thousands of dollars. But the HMZ-T1 uses two 0.7-inch OLEDs, close enough to your face that it appears about the same size as a 150-inch screen at 12 feet–basically, you can’t see anything but the screen, and that screen is a very premium OLED.

Sound comes in the form of built-in headphones that slide down from the headset, providing 5.1 surround sound. In our previews, they sounded pretty good, and were comfortable enough, but keep in mind that you’re stuck with these–there’s no way to use your own headphones, let alone plug into a stereo.

So how does it feel to watch a movie or play a video game with the display strapped to your face? Mostly okay, really, with a few moments of “this feels weird.” The 3-D is some of the better quality I’ve come across on a home system, though I did come away with a slight headache (admittedly, I’m particularly susceptible to 3-D-induced pain). The headset itself is pretty heavy, especially on the nose, where too much of the weight rests–I’m not sure how it’d fare for a two-hour movie. But the back is adjustable, and others seemed to find it more comfortable than I did.

What I wonder is who this is for–it can only be used by one person, and it’s kind of expensive for that. It’s really best suited–like 3-D itself–for video games, especially of the 3-D variety. It’s extremely immersive; you can’t see anything besides the screen, or hear anything besides what’s coming out of your headphones, which is great for gaming. At the same time, though, it’s extremely unnerving to move your head and find that the entire screen moves with you. You don’t need to move your head, since you have a perfect view of the entire screen, but it’s a natural reaction, and it broke the immersive spell every time. It’s also chained by its power/data cord to a set-top box, so forget about blindly roaming around your house or even taking it on a plane unless you’re prepared to set up a power strip with several full-sized pieces of home A/V equipment.

The HMZ-T1 lands in Japan on November 11th, with no word just yet on availability elsewhere.