From conception to first flight in 9 months 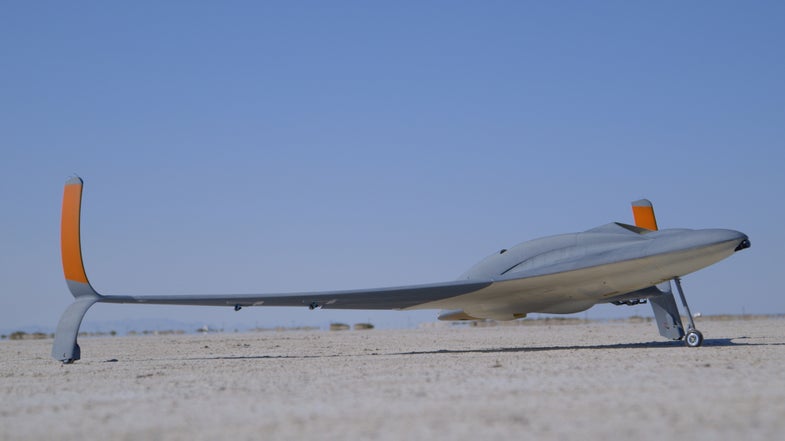 In the early age of flight, the only thing faster than the planes themselves was how quickly new designs were built and flown. Today, it takes decades for modern fighters to go from a concept to prototype to production. Imagine, instead, if that timeline was cut from decades down to months. Aurora Flight Sciences, together with 3-D printing company Stratasys, designed and printed a jet-powered drone in the space of just nine months. Here, look at the nameless wonder fly:

By weight, eighty percent of this bizarrely unnamed plane is 3-D printed. It has a 9 foot -wingspan, weighs 33 pounds, and with its jet engine reached a top speed of 150mph. It can fly for about 5 minutes. Most of its body is printed in lightweight plastic with the clunky name ULTEM 9085. (Perhaps this is why they didn’t name the drone). The fuel tank and exhaust chute are made out of different materials, including printed metal.

The plane, which first flew in Utah in September, is on display now at the Dubai International Airshow. Rather than marketing the aircraft itself, the plane is there to sell customers on the process. Lots of people vend specific models of drones, but if what a company wants doesn’t exist yet, they’re probably interested in people who can design, build, and manufacture a lightweight flying machine for them in less than a year. And other organizations like NASA and GE are pursuing similar, if less ambitious, 3-D printing methods for individual aerospace engine components.

Watch a short video about the 3-D printed drone below:

READ MORE: HOW 3-D PRINTING ROCKET ENGINES COULD WIN BACK THE SPACE RACE