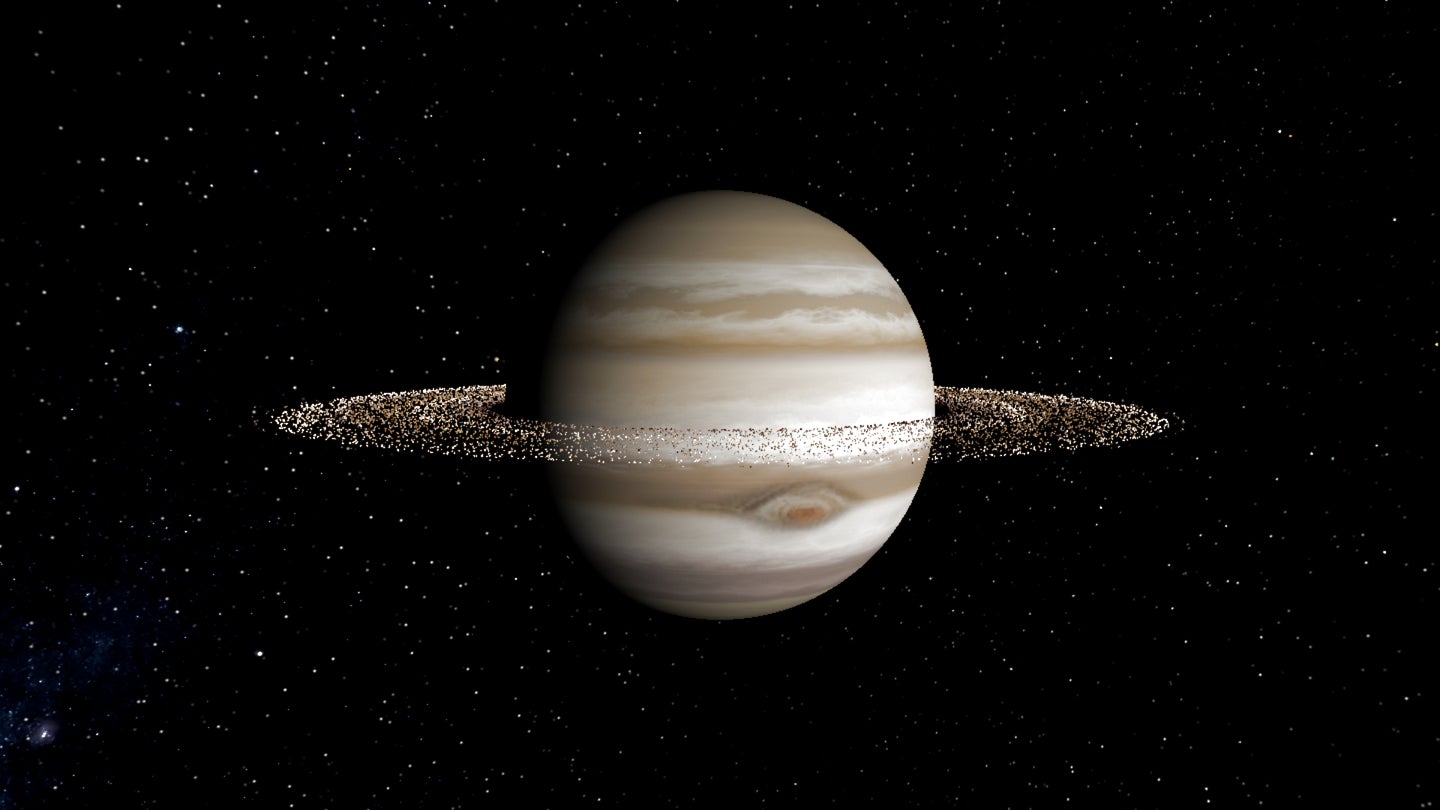 Saturn boasts the most iconic rings in our solar system, but it is not the only planet to have them. Images released earlier this month from the James Webb Space Telescope (JWST) gave the world a glimpse of Jupiter’s rings, though they are much darker and fainter than Saturn’s. Until now, astronomers were puzzled as to why Jupiter doesn’t have larger rings, but a new preprint study released on July 13 suggests it may have to do with the gas giant’s moons.

Jupiter, in theory, should have big rings. It’s the largest planet in our solar system—Saturn comes in at a close second—and it stands to reason the gas giant could pull even more space debris to create bigger and more vivid rings.

“If Jupiter did have them, they’d appear even brighter to us, because the planet is so much closer than Saturn,” Stephen Kane, an astrophysicist at the University of California, Riverside and lead author of the study, said in a university press release. When Jupiter is closest to Earth, astronomers estimate it’s about 365 million miles away, whereas Saturn only gets about 746 million miles near Earth.

Uranus and Neptune have rings, too, along with Jupiter and Saturn. But only Saturn’s are visible without an advanced telescope. Unlike its predecessor telescopes such as Hubble, JWST can look at the universe in infrared light, which makes it easier to see the other planets’ less-majestic rings.

Studying rings can give astronomers insight into the planet’s history, revealing what type of collisions or events happened there. Saturn’s massive rings span the length of 27 Earths. They are made up of billions of pieces of comets, asteroids, and moons pulled in and torn apart by the planet’s gravity.

If scientists can calculate the age of the materials that form the rings, they can deduce whether the chunks of space debris came from nearby moons or objects from the distant Kuiper belt. Knowing the origins behind planetary rings could answer some questions on how our solar system and the universe began.

In the current study, the authors used a computer model to simulate Jupiter’s orbit and the orbits of four of its moons—Ganymede, Callisto, Io, and Europa. The astrophysicists also included information on how long it takes for rings to take shape. “We found that the Galilean moons of Jupiter, one of which is the largest moon in our solar system, would very quickly destroy any large rings that might form,” Kane said, referring to the moons by their discoverer, Galileo Galilei.

Since the moons are so big, their strong gravitational force ejects ice coming into Jupiter’s orbit instead of drawing it in. Based on the findings, the team suggests it’s unlikely that Jupiter had large rings in the past and later lost them, as they had originally theorized at the start of their study.

The next step is to use the simulation to study Uranus’ rings. One question they’re hoping to answer is why Uranus orbits the sun tipped on its side. A possible explanation is that a massive collision shifted the planet’s position, and the rings may be leftover remnants from the impact.

“For us astronomers, they are the blood spatter on the walls of a crime scene,” Kane said.  “When we look at the rings of giant planets, it’s evidence something catastrophic happened to put that material there.”