This Flower Just Bloomed In Space

The bright future of space botany 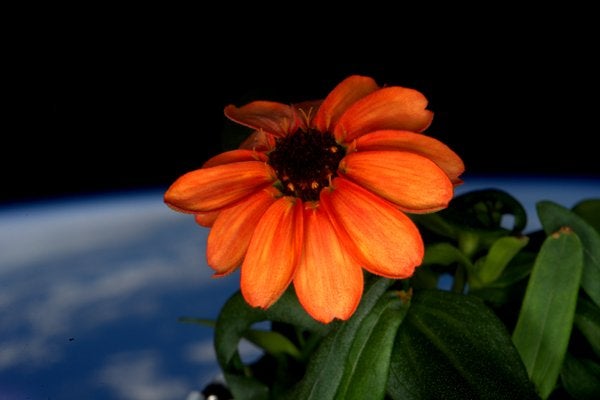 A flower on the International Space Station is exposed to sunlight for the first time. Scott Kelly/Twitter
SHARE

Taking time to stop and smell the flowers can be difficult when you’re 248 miles above the Earth traveling at 17,500 mph. But now, the astronauts on the International Space Station actually have some flowers onboard, and they didn’t even have to stop for them (not that they could).

Over the weekend, astronaut Scott Kelly showed the world a lovely orange zinnia, an annual that’s usually pretty easy to grow here on Earth. But up on the ISS, getting it to grow safely was a challenge.

Back in December, NASA announced that the zinnias were not doing so well, nearing the end of their lifespan and growing a coating of mold. Frustrated with the prescribed instructions for plant care from the ground, on Christmas, Kelly requested permission to take over the plant’s care, becoming one of the first autonomous space gardeners (sorry, Mark Watney).

With some careful monitoring, watering and a well-placed fan to help dry off the leaves (and inhibit mold growth), some of the plants started to recover, eventually blooming beautifully.

NASA is particularly interested in gardening, not just to learn more about plants, but as a way for astronauts to relieve stress in cramped quarters. NASA’s behavorial health researchers believe that caring for plants can help astronauts maintain their mental health while in space while giving them meaningful work.

The zinnias are a step up in difficulty from the lettuce plants that the astronauts grew (and ate!) back in August last year. Successfully growing zinnias will help future Space Station crews learn enough about plant care to eventually grow tomatoes by 2017.

Lettuce and tomato…all they need now is some bacon. Space pigs anyone?