Welcome to Earth, home to human-sized salamanders and skin-eating worms

Celebrate Earth Day with some truly bizarre facts about our world. 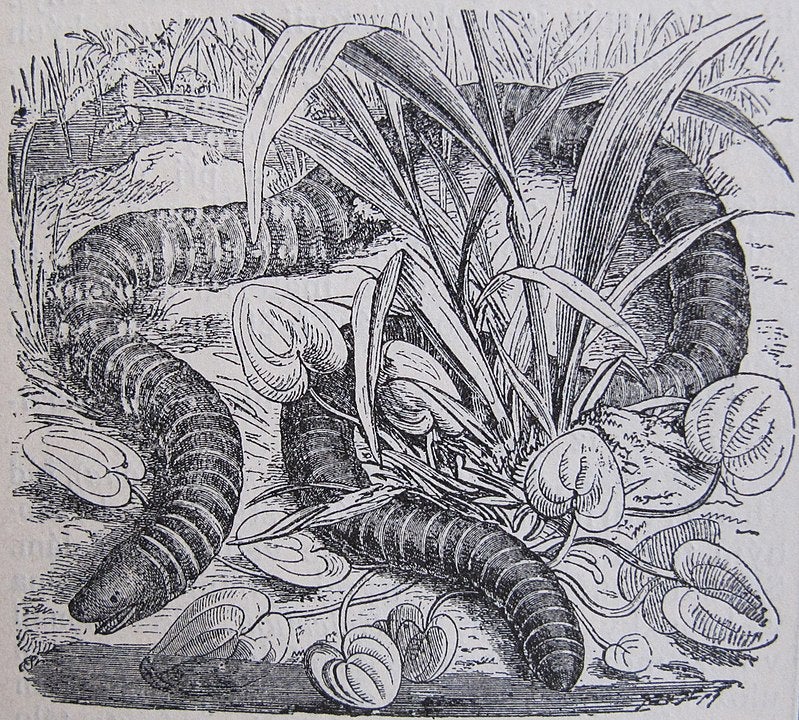 FACT: There are worms that eat their moms’ skin and salamanders as big as people

This Earth day, I couldn’t not mention my most favorite animals: amphibians. Back in the day (college), I took a field course in herpetology, which encompasses both amphibians and reptiles, and I’ve been infatuated ever since. And it turns out I’m not the only one. People have been obsessed with amphibians for hundreds of years, from the witches in Macbeth brewing up eye of newt (spoiler: not actually newt eyeballs), to ancient Egyptians worshipping frogs.

Most of our cool amphibian stories these days are more rooted in science. For instance, there are giant salamanders that grow to be six feet long! They lurk on river bottoms and slurp up prey by making a vacuum with their throats. And when they’re threatened, they release a milky substance that smells like pepper—their own personal pepper spray.

And then there are the caecilians. These amphibious worms slither and burrow underground like regular old worms, but are in fact vertebrates with spinal columns! Just as snakes evolved from long, burrowing reptiles with wee little lizard legs that grew increasingly scarce through natural selection, caecilians likely descended from salamander-like ancestors that found wiggling into the dirt more useful than crawling over the ground.

My favorite caecilian fact is that when some species give birth, the babies are born with teeny, shovel-like teeth. They use those teeth to eat a layer of skin off of their mother for nourishment. And the mom is totally chill with it! The practice is called maternal dermatophagy, and it likely evolved more than 100 million years ago.

While these two animals are about as weird as it gets, you probably have some run-of-the-mill amphibians right in your backyard—maybe a newt, a salamander, or a frog. These herps are crucial parts of our planet’s ecosystems, and many are what scientists call “bioindicators.” That means that if they get sick or die off, it’s a sign something’s gone wrong with the environment. Tune in to this week’s episode for more even more reasons to stan amphibians.

FACT: The biggest organism on the planet is probably a ‘shroom

I’ll be honest: It doesn’t take much to get me excited about mushrooms. But even for those of us without a history of studying mycology, the “humongous fungus” holds undeniable appeal: This is the colloquial name often given to a pair of positively ginormous mushrooms in Michigan and Oregon. Contrary to a fake photo that circulated online a few years back, this isn’t a single, larger-than-life mushroom that sprouts out of the ground and provides a tree-like shaded canopy. While the mushrooms in both Michigan and Oregon do, respectively, count as individual organisms—making them some of the largest, heaviest living creatures in the world—they only occasionally show up as normal-sized shrooms aboveground. Their true heft is hidden below the surface, where a massive network of root-like stalks of mycelium branch out for miles.

For our special Earth Day episode of Weirdest Thing, I take a deep dive into how this incredible fungus manages to grow so big. Don’t worry, botanists: Pando gets an honorable mention, too. Even a mycology nerd can admit that an 80,000-plus-year-old army of tree clones is pretty fantastic.

FACT: These massive boulders seem to race across the desert on their own

Death Valley can be an odd and eerie place. An arid valley nestled within the Mojave Desert on the eastern border of California, the area is known for its scorching, unforgivable heat. It reportedly earned its forbidding name when a group of 1849 gold rush pioneers found themselves lost there. When they were finally rescued, before heading out, one man turned around and said, “Goodbye, Death Valley.” Unsurprisingly, the name stuck.

Perhaps because of its desolate, hot environment, there are plenty of strange and mysterious tales connected to Death Valley. But, in my opinion, there’s none as mysterious as the case of the sailing stones.

This story takes us to a region of Death Valley called Racetrack Playa. The area is a dry, flat-as-a-pancake lakebed with barely any vegetation or life. But streaked across the ground are distinct indentations of rocks that have seemingly been dragged from one spot to another. They move in eerily linear directions, then sometimes take abrupt 90-degree turns. Sometimes they move a few hundred feet, sometimes just a few inches.

But here’s the thing: No one is out there dragging those rocks around. And while some of these stones are tiny, often 6 to 18 inches long, others are giant, 700-pound boulders.

Over the years, these stones have generated loads of folklore and numerous theories, from the scientifically plausible to the extreme. Listen to this week’s episode to find out how scientists used tiny cameras and time-lapse video footage to solve this mystery—at least for the most part. Earth still has her secrets.