Tiktaalik’s ancient cousin decided life was better in the water

This paddle-finned fish may have returned to swimming in search of tasty meat. 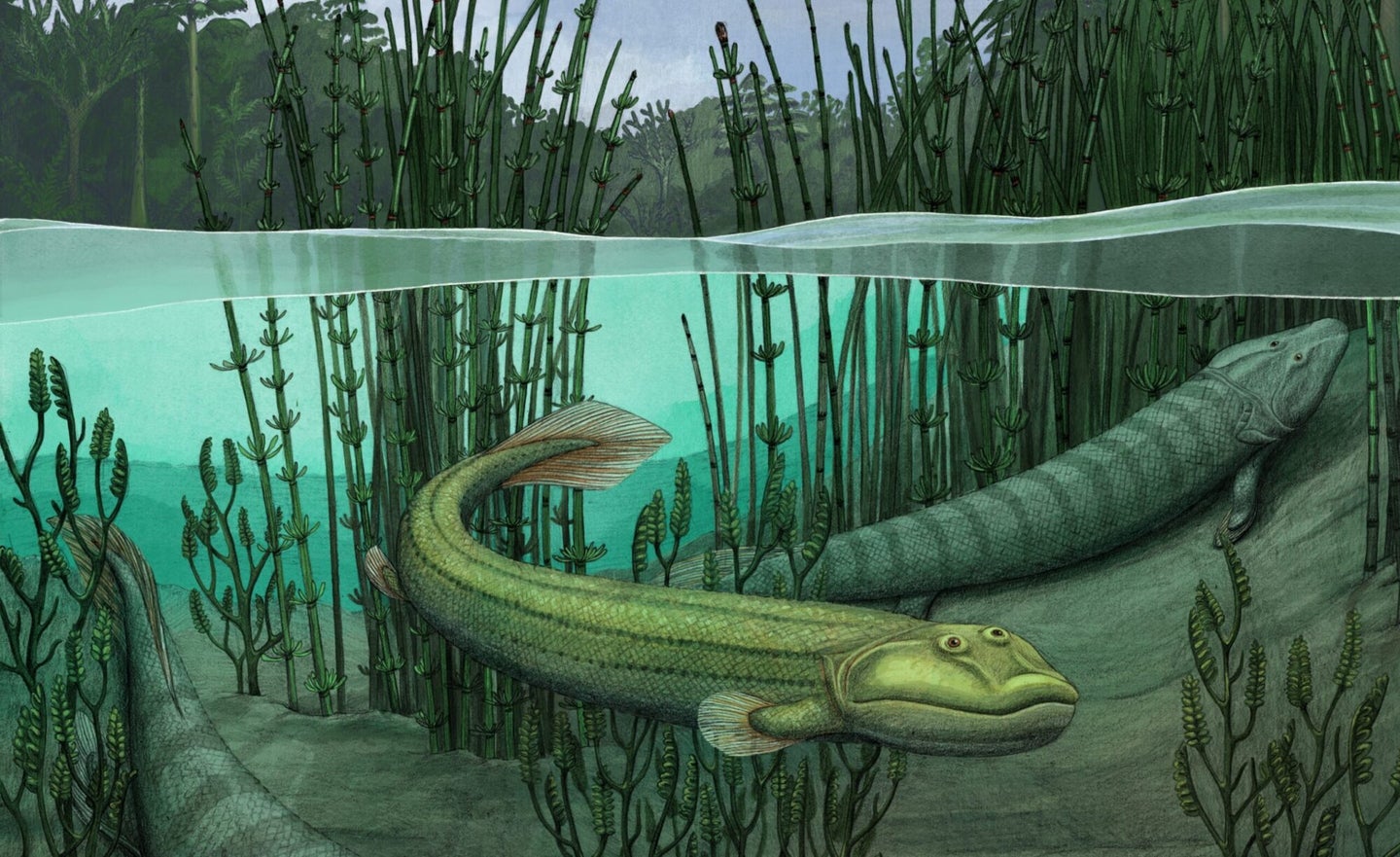 Nearly 20 years ago, scientists discovered a fossil in the Canadian Arctic that represented a transitional stage between marine and land-dwelling animals. Tiktaalik roseae—nicknamed a “fishapod,” or a fish with limbs—used its muscular front fins to prop itself up in shallow waters or on mudflats.

But the course to dry land doesn’t always run smoothly. At least one close relative of Tiktaalik decided to return to the life aquatic, researchers reported on July 20 in Nature. A smaller fossil excavated from the same area as Tiktaalik shares some features with its land-curious cousins, but it has a fin much better suited for swimming than crawling. The ancient lobe-finned fish, which the team named Qikiqtania wakei, sheds light on a mysterious chapter of vertebrate evolution.

“This is a really unexpected variation in the group right at the cusp of the water-land transition,” says Thomas A. Stewart, an evolutionary biologist at Pennsylvania State University and coauthor of the findings. “It shows that there was a diversity of animals doing all kinds of different things.”

Alice Clement, an evolutionary biologist and paleontologist who studies early vertebrates at Flinders University in Adelaide, Australia, described the work as a “lovely study.”

“New finds such as this help us to piece together the sequence of characters acquired in the lead up to the colonization of land by our terrestrial ancestors,” she said in an email. More samples of this enigmatic group, she added, would help “confirm the authors’ interpretation about a possible ‘return to the water.’”

The Qikiqtania fossil was first collected in 2004 on southern Ellesmere Island in Nunavut. “It was found because of bad weather,” recalls Neil H. Shubin, an evolutionary biologist at the University of Chicago and another coauthor of the study. He and his collaborators couldn’t access the site where, several days later, they would discover Tiktaalik, so the team searched for fossils near their camp. Among the finds was a block of rock with scales and part of a jaw exposed. The specimen “kind of sat in the drawer for 15 years,” Shubin says, before his colleagues began to examine it in detail.

[Related: This ancient bony fish was a sexual pioneer]

The team initially suspected that the fish was a young Tiktaalik, Stewart says. But when they used CT scanning to get a better look at the fossil embedded within the rock, they realized that the creature’s upper arm bone had some unique characteristics.

“The surprise for us really was in the shape of the humerus, which suggested that this is not an animal that could support its body with its fins like Tiktaalik and like tetrapods,” Shubin says, referring to four-limbed animals with backbones. “This is an animal probably more suited for open-water habitats.”

The fossil included the lower jaws, partial upper jaws, fragments of neck bone, scales from various parts of the body, and the left pectoral fin. Qikiqtania was named for the Inuktitut word Qikiqtaaluk/Qikiqtani, the region where the fossil was found. The researchers estimate that it lived roughly 375 million years ago, making it slightly older than Tiktaalik. Qikiqtania would have reached about 2.5 feet in length and had an elongated body with a broad and paddle-like fin, sharp teeth, and eyes perched on top of a flat head.

To determine where Qikiqtania belonged on the prehistoric family tree, the researchers used the CT scans to create 3D reconstructions of the fossil and compared it to 12 other species. The team calculated how closely the anatomy of Qikiqtania resembled that of other early vertebrates by comparing 125 traits between the fossils.

“This animal is related to the first limbed vertebrates—the first animals with hands and feet,” Stewart says. However, “its humerus is quite distinct from other creatures that are closely related to it.”

In Qikiqtania, this arm bone is relatively small and shaped like a boomerang, whereas Tiktaalik has a blocky, angular humerus. Additionally, Qikiqtania lacks the ridges and crests in the bone that its relatives have where pectoral muscles were attached. “It’s not a humerus that could do a pushup,” Shubin says.

Some evolutionary biologists are skeptical these unusual features represent a truly new find. Per Ahlberg, who studies vertebrate evolution at Uppsala University in Sweden, isn’t convinced that Qikiqtania is a different species from its cousin Tiktaalik. One possibility is that the distinctive humerus is “lightly ossified and crushed, which could affect the interpretation,” Ahlberg said in an email, adding that he hopes to examine the bone in more detail.

Still, he said, the new report is “an interesting paper that puts forward some novel ideas.”

[Related: An archerfish family tree is the best shot yet at the evolution of sniper fish]

Other species ancestral to Qikiqtania had fins that could support their bodies, suggesting that Qikiqtania returned to the water after its relatives crawled onto land.

“It’s a specialization which is fascinating because it’s showing that the transition from life to water to life on land is a bit more complex,” Shubin says. “You have some creatures evolving to walk on land or the water bottom, and others are evolving to open-water habitats; it’s going both ways.”

It’s not clear why Qikiqtania took to the water, but the researchers have a few guesses. “There’s a lot of meat in the water,” Shubin says. Qikiqtania’s skull has a few features that it shares withTiktaalik, indicating the fish could both bite and suck—a powerful edge while hunting. “This animal was probably able to do that as well,” Shubin speculates. “It had certain advantages to return to water in that way.”

The researchers hope to find more complete Qikiqtania specimens on future expeditions. A well-preserved shoulder or pelvis could reveal how the creature moved through the water. “What was its gait, how did it use the hind fins, how did it paddle?” Shubin says. “We don’t have enough of the anatomy to know those details.”