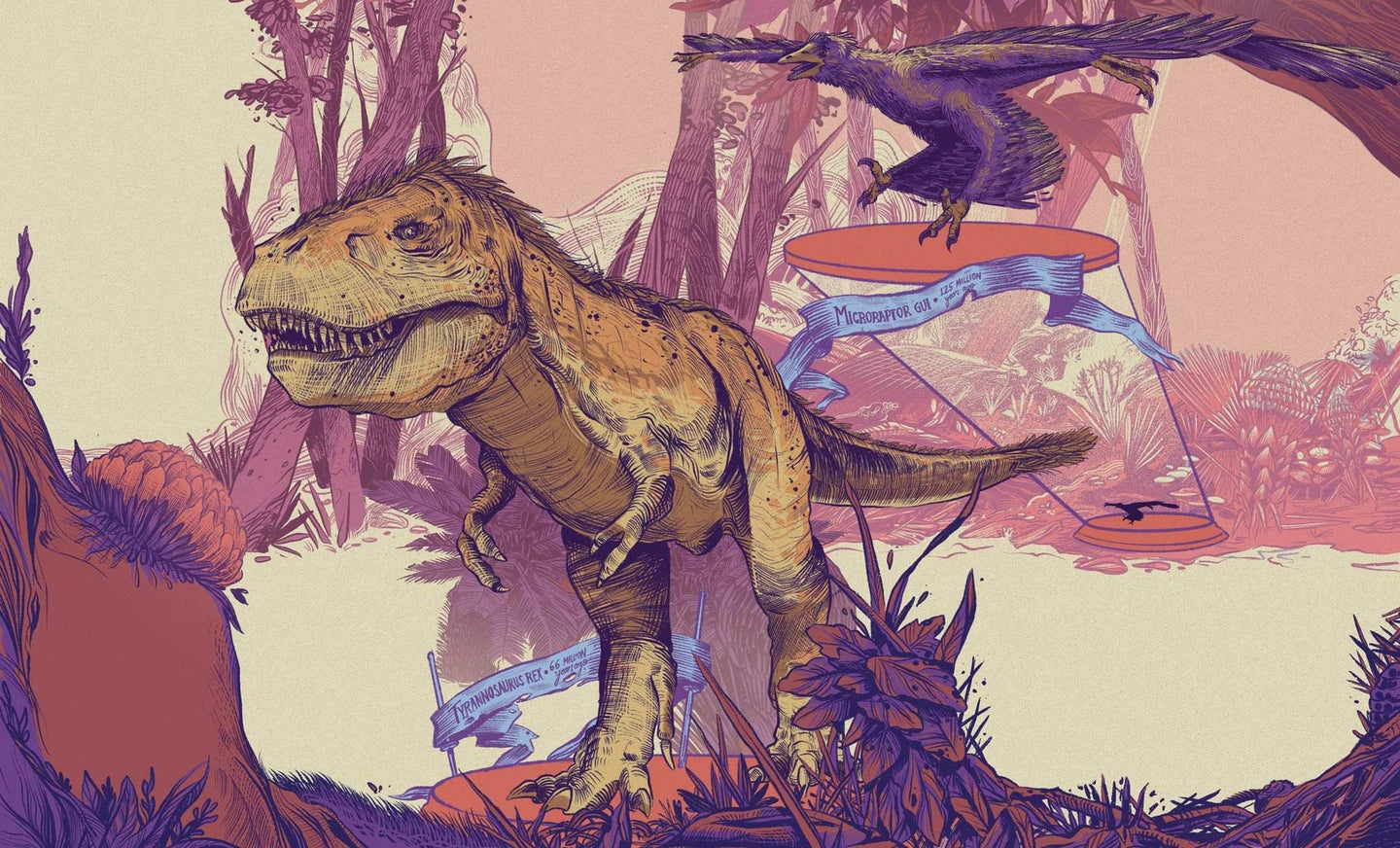 No one knows for sure what dinosaurs looked like, so artists make informed guesses based on these clues. Thales Molina
SHARE

You’ve seen enough museum models, illustrations, and CGI predators that you’d likely recognize a Tyrannosaurus rex if you saw one. But how can you be sure? Nobody has ever clapped eyes on one in real life, and even the best skeletons are often only 90 percent complete. Specialists called paleoartists do base their re-creations on hard evidence (bones, feathers, and bits of skin) but, just as often, well-informed guesses. We may never know exactly how T. rex and other prehistoric creatures like the Microraptor gui looked, but here’s how we landed on the current incarnations of these deceased beasts.

The way joints fit together informs a dino’s pose—along with a bit of inspiration from contemporary creatures. Without cartilage and other connective tissues, experts map extinct skeletons against how birds and reptiles stand and walk. Using those methods, they inferred that T. rex held its spine horizontally, which means the tail shot straight back rather than dragging as it was depicted prior to the ’70s.

Like reptiles, dinosaurs probably didn’t have much body fat, so they looked pretty swole. To determine just how stocky or svelte to render a species, paleontologists most often refer to the same muscle groups in birds. But sometimes there’s an evolutionary reason to make an area extra burly: A T. rex, for example, had to kill prey and bite through bone with only its jaw strength—hence its thick-neckedness.

Tyrannosaurs’ smooth, toothy skulls are quite reptilian. But unlike crocs or gators, dinosaurs were terrestrial, so they may have needed to trap moisture inside their mouths to stay hydrated. That’s why many depictions have partial lips, more akin to lizards. Studying eye sockets tells artists how to orient the peepers. Frontward-angled holes, such as those on the Microraptor, would have pointed the eyeballs ahead.

Bones’ structures can indicate how appendages moved. T. rex, for one, used to be shown with its hands facing down, like it was playing a piano, but a 2018 analysis of turkey and alligator shoulders determined their palms may have turned in. Similarly, the angle between M. gui’s shoulder blades and rib cage may have prevented its wings from lifting high enough to flap; wind-tunnel tests suggest these dinos glided.

Soft tissue generally doesn’t last underground, but sometimes we get lucky. For the T. rex, a small slice of fossilized skin found in Montana enabled artists to make a stamp of the texture and apply it to the rest of the body. Coloring is trickier: Designers take cues from the environment more than the fossil record. T. rex lived in semi-marshy areas and flood plains, so it likely had brownish-greenish dappled skin to blend in.

Tiny cellular structures called melanosomes vary in color depending on their shape: Black ones are sausage-like; reds are round. Thanks to a very well-preserved M. gui feather, we know it shone raven. Nanostructures also suggest it had an iridescent sheen, like a crow or magpie. We’ve never dug up a plumed T. rex, but its close relatives often have protofeathers on their heads, backs, and tails, so we suspect the king did, too.