Just in time for Halloween, the sun looks like a jack-o’-lantern

While it is fun to look at, the smiley image might spell a little trouble for Earth. 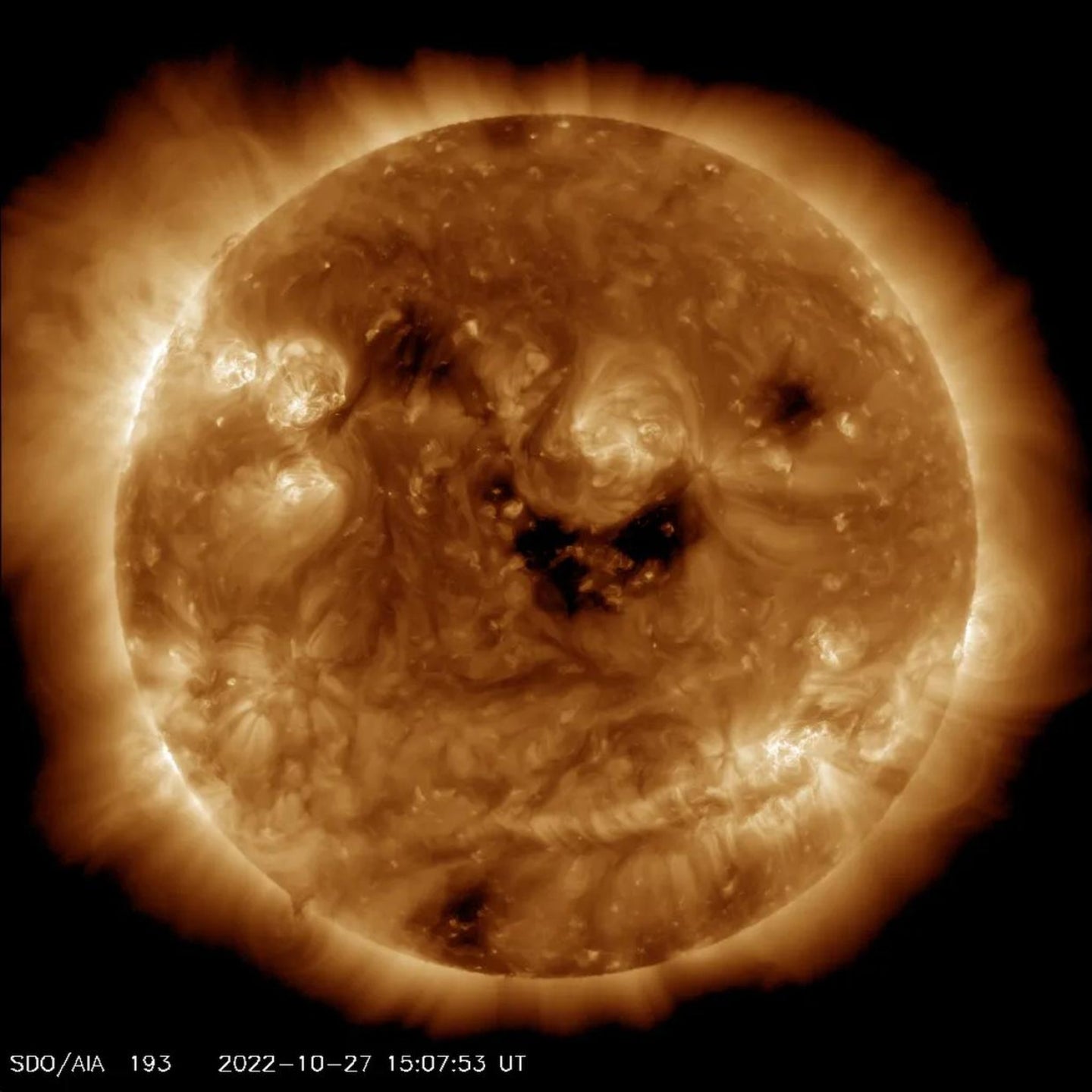 It looks like many things to many people. The Stay Puft Marshmallow Man from the classic 80s movie “Ghostbusters.” A ScrubDaddy sponge. An emoji. And a jack-o’-lantern, just in time for Halloween. Last week, NASA’s Solar Dynamics Observatory captured an image of the sun’s surface in an apparent smile. “Today, NASA’s Solar Dynamics Observatory caught the sun ‘smiling.’ Seen in ultraviolet light, these dark patches on the sun are known as coronal holes and are regions where fast solar wind gushes out into space,” NASA wrote in a tweet.

The patches making up the face in the image are coronal holes—cooler sections of the sun’s outer layer. This layer is usually around 10,000 degrees Fahrenheit. The coronal holes show areas of high magnetic-field activity that steadily release solar wind. These cosmic gusts are a flow of protons, electrons, and other particles that travel through space.

While this image is a visual treat, the activity behind it might prove to be more of a trick back here on Earth. The holes might be a solar storm that could generate a beautiful aurora borealis in Earth’s more northern latitudes or wreak havoc on the planet’s telecommunication systems. Solar storms like these can become troublesome when the particles make it to Earth’s atmosphere, where television and radio antennae can pick up their signals. A big enough solar storm can cause power outages and damage electrical grids. The Carrington Event in 1859 was one of the most significant solar storms in recorded history and caused fires at telegraph stations and even auroras in tropical regions. With significantly more telecommunications in the 21st Century, a similar event could cause severe problems to the technology we rely on daily.

One more recent spooky solar storm was the appropriately named Halloween Storms of 2003. With minimal warning, three giant sunspot groups formed on the sun’s surface by October 26, 2003. The largest of these spots was 13 times bigger than Earth’s, and 17 major solar flares erupted from the sun. “The storms affected over half of the Earth-orbiting spacecraft, intermittently disrupting satellite TV and radio services and damaging a Japanese scientific satellite beyond repair,” according to a National Oceanic Atmospheric Administration post. “The solar activity also sent several deep-space missions into safe mode or complete shutdown and destroyed the Martian Radiation Environment Experiment aboard NASA’s Mars Odyssey mission. At the height of the storms, astronauts aboard the International Space Station had to take cover from the high radiation levels, which had only happened twice before in the mission’s history.”

[Related: Violent space weather could limit life on nearby exoplanets.]

According to some researchers, the planet is also long overdue for a massive solar event. “Scientists expect that to happen on average, with a couple percent probability, every year, and we’ve just dodged all these magnetic bullets for so long,” University of California at San Diego physics professor Brian Keating told The Washington Post. “So it could be really scary, and the consequences could be much more dramatic, especially in our technology-dependent current society. There could be something on our way for Halloween night after all. Pretty spooky, but hopefully not too spooky.”

The Solar Dynamics Observatory was first launched in 2010 with a mission to investigate how solar activity is created and drives space weather. The spacecraft measures the sun’s atmosphere, magnetic field, energy output, and the sun’s steamy interior. But the Solar Dynamics Observatory is hardly the only NASA entity working hard to bring spooky images back to Earth this Halloween—the Hubble Telescope also captured a spooky “cosmic keyhole” that looks a bit like a portal into another dimension on October 28.