The latest from Rosetta's smashing mission 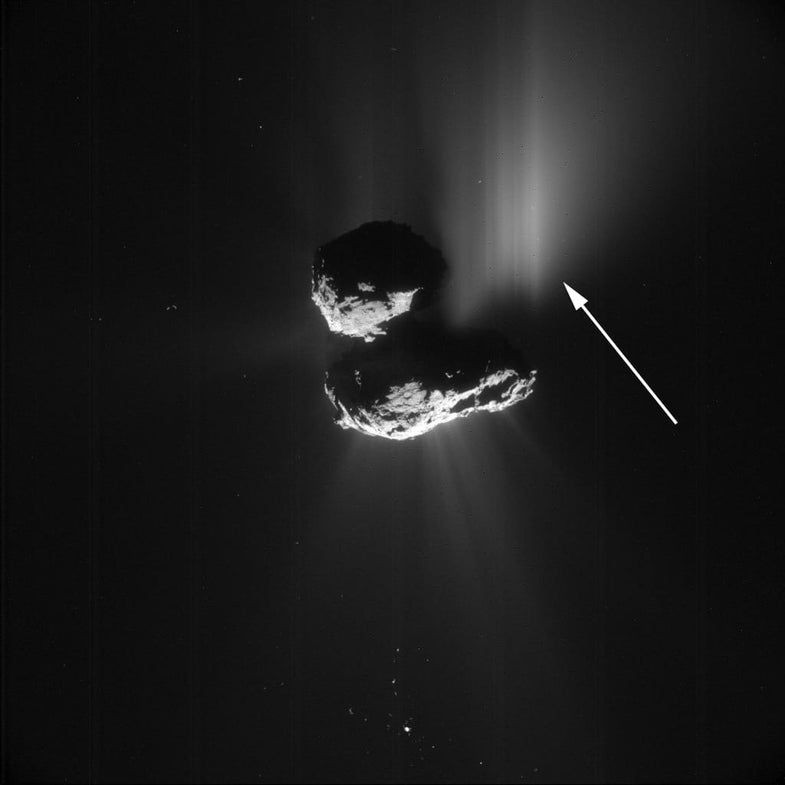 On July 10th, 2015, a chunk of cliff with the same volume as nine Olympic-sized swimming pools tumbled from its perch on Comet 67P. A month later, the comet would reach its perihelion, the closest its elliptical orbit passes to the sun. As the sun’s rays reached the Aswan cliff section of Comet 67P’s northern hemisphere, the rapid change in temperature warmed the cliff from -220 degrees Fahrenheit to 122 degrees Fahrenheit in the space of about 20 minutes. One percent of the cliff’s mass was lost to space, a great jetting plume cast off like water after a dive, and the boulder-like formations settled into a new ridge at the foot of the cliff. We know all of this drama in the heavens thanks to a paper published today in Nature Astronomy.

“The most exciting thing is that physically we have seen the interior of the comet,” says lead author Maurizio Pajola. Together with an international team of over sixty coauthors from thirty-four institutions, including NASA and other space agencies, Pajola discovered humanity’s closest-ever look at the inside of a comet. “It is the first time that we are seeing something like that.”

The exposed material of the Aswan cliff was clearly visible after the great tumble, captured five days later in pictures from the OSIRIS camera onboard the Rosetta spacecraft. Rosetta was sent specifically to monitor Comet 67P as it passed close to the sun, and the findings did not disappoint. The bright patch in the freshly-exposed underside of the Aswan cliff is extremely reflective, unlike the normal dull dust of a comet’s surface. Underneath a gray exterior, the comet has a shining, frozen heart, filled with ice.

Aswan cliff before and after the collapse

3D views of the Aswan cliff showing its edge before (a) and after (b) the collapse. c) shows the dimensions of the overhang that detached. Almost 78,000 cubic feet of material fell in the collapse.

“Physically, the sun is dictating what has to happen on the surface of the comet,” says Pajola. Comets are not just inert hunks of ice tossed about the solar system. Instead, this finding suggests we should think of comets as active, mutable celestial bodies. Fitting for a miniature world made of ice, sunlight itself is what reshapes the comet’s surface.

Rosetta ended its mission in September, 2016, with a farewell crash into the surface of Comet 67P, but the scientific work of processing and analyzing everything the orbiter sent back is still ongoing. The fall of the Aswan cliff is the latest revelation, but it won’t be the last.

“I think that really the next step that we need to do in 20 years, I don’t know, is to bring back home some samples of the comet. This is really the next thing to do in cometary science,” Pajola says.

“For other things, Rosetta did almost everything. Of course, as each spacecraft was answering questions, it was also making new questions,” he adds. “That’s the beauty of science, right?”

Watch a sunrise over the Aswan cliff below: