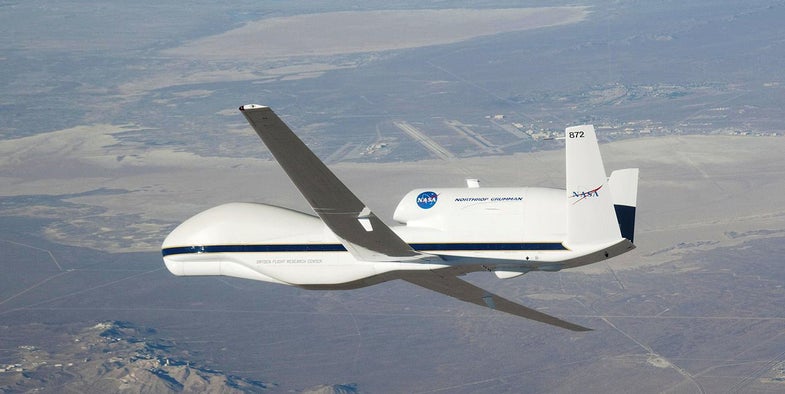 It starts with a metaphorical open door. According to files posted on the text sharing website Pastebin by self-proclaimed hackers AnonSec on January 31st (which have since been removed), the hackers used Bitcoin to purchase access to a NASA computer network from another hacker outfit in China.

Upon gaining access to the network, AnonSec found NASA computers with passwords left on the default. From there, they searched for whatever they could find on NASA’s use of drones, and eventually, they say, they tried to crash a drone into the sea.

The crash was averted, AnonSec claims, because NASA noticed the deviation from course and corrected it.

Only major issue with this story? NASA says it didn’t happen. In a statement sent to Forbes, the space agency said:

It’s too early to say how much of the information posted by AnonSec was already public, if any or even all. Accessing the drones from inside the network would be a lot easier than trying to intercept encrypted drone signals in real time, though with NSA-levels of computing power and skill the latter is possible.

It’s also worth noting that NASA has been called out for notoriously lapse computer security measures in the past (a laptop with command codes for the International Space Station was stolen several years ago, and an earth-monitoring satellite called Terra also experienced “suspicious events” that many beileve to be an attempted hacking originating from China.)

AnonSec’s release argues the hack wasn’t just a technical showcase, it had a political motive as well. This is odd, because NASA’s drones are purely research machines, adapted surveillance platforms turned towards scientific ends. These are not the armed killers America flies over the Middle East, nor are they tasked with a law enforcement mission, as some drones are stateside.

What mission of NASA’s did AnonSec hope to disrupt?

Ah yes, the grandest conspiracy of our time! The conspiracy theory got its start in the mid-1990s, despite, Popular Science explaining how jet engines sometimes leave clouds way back in May 1969 As we wrote then, “Contrails, Dr. Roberts explains, do not simply spread out at the 30-40,000-foot altitudes where jets fly, but spawn cirrus clouds by seeding the upper atmosphere with ice crystals from the water vapor in jet exhaust.

That’s from the late Dr. Walter Orr Roberts of the National Center for Atmospheric Research in Boulder Colorado. If NASA is involved in a deep aerial conspiracy (it isn’t) it appears they managed to secure it by going back in time and worth through a different agency to cover their tracks.