Does brushing your teeth affect your appetite? 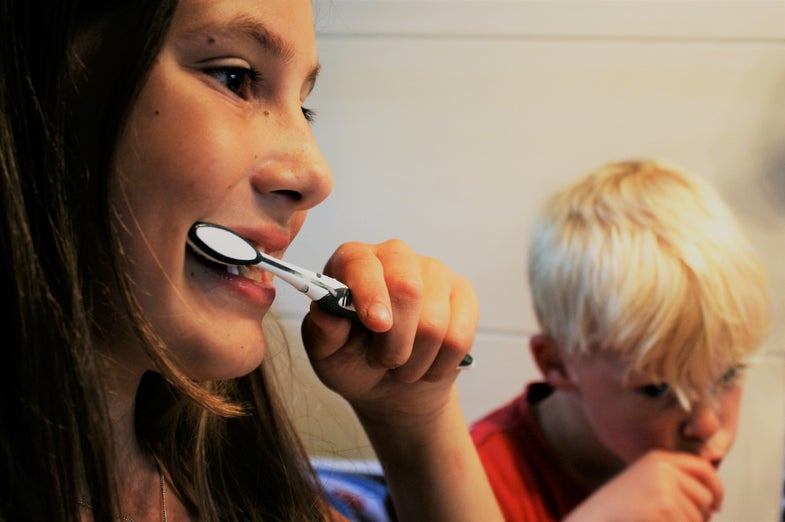 Brushing your teeth a few times a day is among the best ways to protect yourself against one of the most hated phrases in the English dictionary: dental cavities. But on Twitter, some dental scrubbers have mentioned that the mere act of brushing their teeth can affect their appetites, either stimulating it and causing them to get the nighttime munchies or generating the opposite effect and curbing their appetites altogether. PopSci investigated this weird phenomenon, and here’s what we found:

There’s no evidence that brushing your teeth has any effect on the hormones that regulate a person’s appetite, according to Leslie Bonci, a registered dietician and sports nutritionist in Pennsylvania. So why is it that so many people get the munchies (or lack thereof) after their daily dental cleaning? Bonci says the time of day is likely the actual culprit.

People tend to brush their teeth at the beginning of the day—before they’ve done anything—and at the end of the day, as the last thing they do, Bonci says. If brushing your teeth is the first thing you do, and you are also someone who always eats breakfast early in the morning, then it’s likely that your brain will remember that brushing your teeth means breakfast is just around the corner. The opposite would be true at the end of the day. Those who say it suppresses their appetite may more strongly associate brushing with a sense that their chompers are out of commission for the evening. “It would be a totally different story if someone brushed their teeth in the middle of Thanksgiving dinner, that would be an interesting test,” says Bonci.

While this hasn’t really been studied in depth, the flavor of your toothpaste could also be playing a role. Most toothpastes on the market today are mint flavored. Mint itself is often used as a sort of refreshing taste to cleanse the palate and signal the conclusion of a meal, says Bonci. But at the same time, some folks might find the sweetness to be a stomach-pang stimulator. However, Bonci says, the small amount of flavor in toothpaste itself shouldn’t be enough to make you hungry. “You would need some other sort of appetite inducing stimulus like a strong aroma to push you over the edge, but it could theoretically play a role.”

Then there’s the fact that most toothpastes temporarily affect our tastebuds. Sodium laureth sulfate, a common surfactant that makes toothpaste foamy and easier to spread around, also suppresses the sweet taste bud receptors on your tongue and intensifies the bitter ones. Your brain remembers this effect, which is why things like oranges and other citruses taste so weird after brushing your teeth. It could be that the thought of those gross flavor effects, however unconscious, turns you off the idea of a snack.

Alone, none of these factors have a significant effect. But some combination could help you put an end to late night snacking—or send you running to the fridge for a bedtime treat.