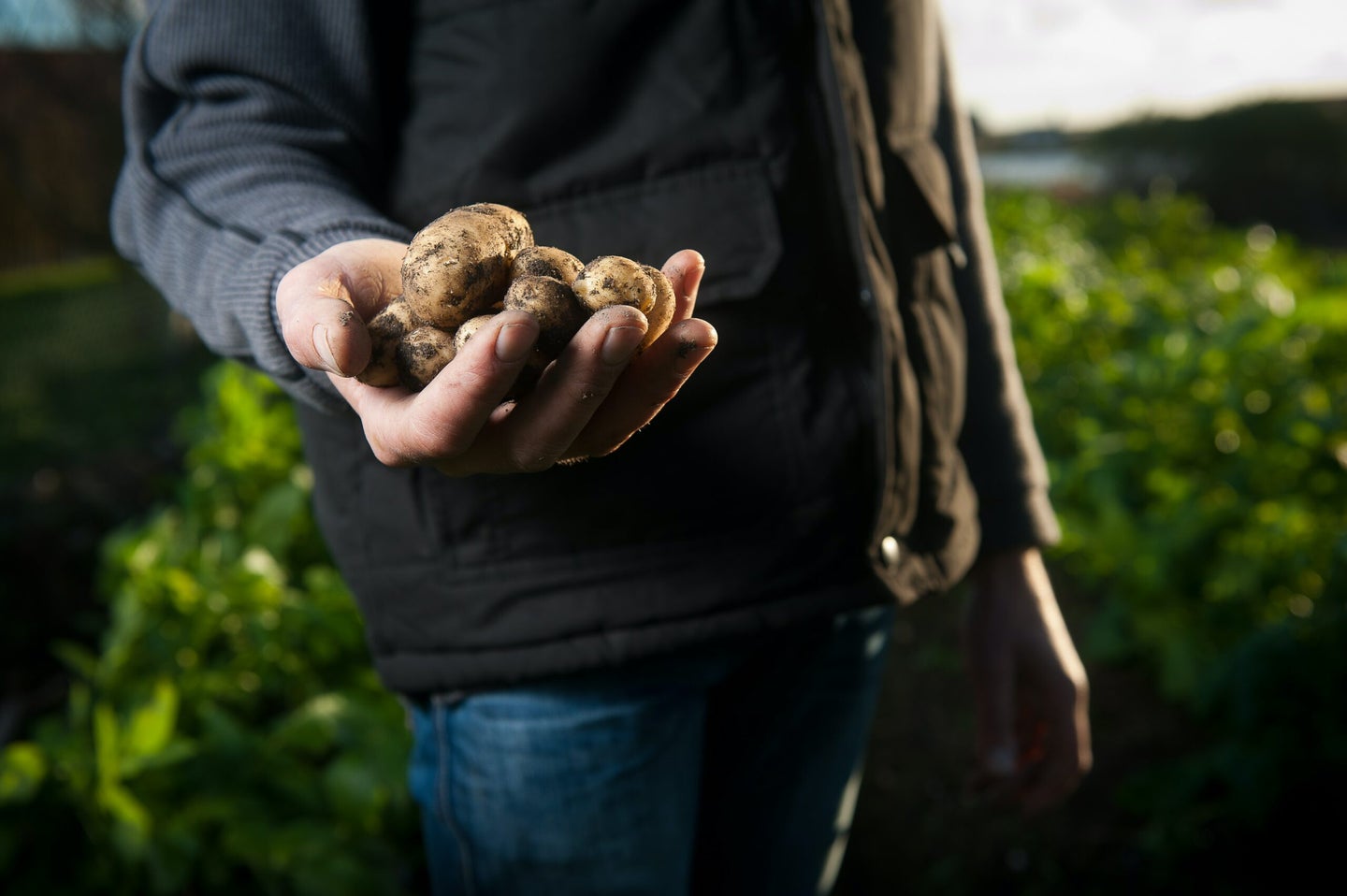 In recent weeks, numerous stories have emerged about farmers dumping their dairy and produce. Idaho farmers are leaving their onions to rot in the field, South Florida growers are plowing their beans and cabbage into the ground, and lettuce is decomposing in California fields.

While vegetables are left to rot, food banks are struggling to meet the needs of the hungry. In a survey by the nonprofit Feeding America, 98 percent of food banks reported they were having increased demand for food assistance during the COVID-19 pandemic. However, bridging this gap between farm surpluses and food bank shortages is not straightforward. At the heart of this situation is a highly-specialized food supply chain that can’t easily pivot to supplying donations or retail.

“The biggest shift that happened is when they shut down restaurants except for those with fast food and delivery options,” says Dawn Thilmany, an agriculture economist at Colorado State University. Normally, about 50 percent of food produced goes to the wholesale market, which commercial kitchens buy from. Now, Thilmany says that an estimated 75 percent of the wholesale market is gone.

Dairy has been perhaps hit the hardest. Andrew Novakovic, an agriculture economist at Cornell University, says it’s normal for milk producers to dump some of their product as demand fluctuates, but that trashed milk would normally be just 0.3 percent of the total supply. Now, Novakovic says industry estimates suggest that somewhere between 5 and 10 percent of milk is getting pitched.

Before the COVID-19 shut down, the food service industry was a major buyer of dairy, purchasing about half the supply of cream and butter. Coffee shops in particular purchase lots of cream for their beverages. School breakfast and lunch programs are also a major client of the dairy industry, buying all those little cartons of milk served on cafeteria trays. Restaurants represent a lot of the demand for the milk required to make cheese, too. “There are enormous cheese processing plants that are buying hundreds of tanker trucks a day of milk that are producing cheese for just Domino’s,” says Jayson Lusk, food and agricultural economist at Purdue University. With restaurants shutting or slowing down, all that milk has nowhere to go.

In total, Novakovic says it’s estimated that dairy demand in the U.S. is down by 10 to 15 percent. Meanwhile, cows still need to be milked everyday. Many dairy producers are not able to switch their business model this quickly. They might not even have a say, because many dairy farmers are members of larger business cooperatives that determine where to sell their milk. And producers that typically sell to a cooperative that, say, uses all their milk to make feta cheese packaged in humongous vats for commercial kitchens don’t have the ability to switch to selling dairy in smaller quantities for retailers.

And with the enormous volume of milk that major producers make, it’s infeasible to give it away. A few families driving out for a free bucket of milk won’t make a dent. Novakovic adds that most dairy farmers don’t pasteurize their product onsite, so selling it raw can also introduce food safety issues.

The good news is, this unwanted moo juice isn’t totally wasted. As Novakovic notes, the nutritionally-dense fluid can be salvaged in a few ways. Some farmers have anaerobic digesters, which ferment waste to produce methane gas used for energy. More often, though, the farmers dump in milk in manure lagoons, and use some of the liquid in those ponds to fertilize fields. Sometimes, the milk is sprayed directly onto fields.

Fruits and vegetables are also stuck rotting on farms. This is already happening across southern, warmer states that are deep into spring, including Florida, Texas, New Mexico, Arizona, and California. “It’s disheartening and depressing to see farmers having to destroy perfectly good food,” says Lusk. “Again, it’s because some supply chains for fresh fruits and vegetables are set up to deliver to restaurants.” Similar to dairy, some farmers sell a large proportion of their produce to food services. Now, with those ripe veggies remaining sellable for only two weeks or so, it’s not possible to shift markets fast enough.

We might also see losses in the animal industry. In recent weeks, a few meat packing plants have closed as workers came down with COVID-19. “These are big plants,” says Lusk. “One big packing plant could easily be somewhere around five percent of our total meat output.” This could put a roadblock in the supply chain, preventing farmers from selling poultry, pork, and beef. If the closures continue, “we’re going to have a whole lot of animals that have nowhere to go,” says Thilmany. “We can feed them a little longer … [but] at some point in time, that’s going to be a whole other version of food waste.”

Some restaurants have been able to ease impacts to their business, as well as the food supply chain, by selling off their wholesale items to consumers, says Thilmany. Panera is now functioning as a grocery store, repackaging wholesale produce, dairy, and bakery foods in retail quantities. Many smaller bakeries and restaurants are following suit (a useful tip for those desperately searching for flour to use in their adventures in sourdough baking!). Some farmers with existing direct-to-consumer sales have also been able to recoup losses through increasing online sales.

When it comes to donating surplus produce, it’s cost prohibitive for farmers to package and ship away acres-worth of crops. Among organizations helping the hungry, labor and funds are needed to pick up and distribute all that food. Also, many food banks rely on packaged, shelf-stable goods, because preparing and storing perishables requires additional help and refrigeration.

If we want to truly save the bulk of this surplus, a large-scale network capable of distributing this food is needed. With funding from the CARES Act, the recently-passed $2 trillion relief fund, the USDA may be able to help. “There are rumors afoot that USDA is going to put out its relief programs this week,” says Thilmany. “Of the proposals I’ve seen floating around, there’s at least one of them … [in which] they’re going to give a bunch of money to food banks or food assistance assistance programs.” This money could help the programs buy up the surplus from local farms, thus cutting back on waste and feeding the hungry. Perhaps we’ll see more food saved from rotting soon.