Researchers tracked how microbes spread in a newly opened hospital 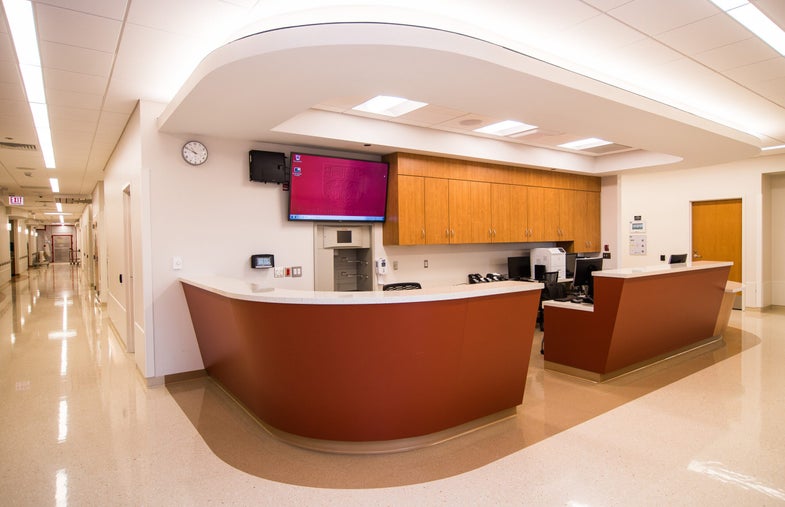 Locations on the third floor of the Center for Care and Discovery at the University of Chicago Medicine, July 15, 2016, while work is being completed. (Photo by Jean Lachat). Jean Lachat
SHARE

Many human beings spend the majority of their time indoors, interacting with and coming into contact with other humans, and objects that other humans have touched. At the same time, we’re surrounded (inside and out) by a teeming mass of millions of species of microbes that they spread to the people and things surrounding us. Recently, scientists have become interested in these tiny organisms—collectively known as the microbiome—and how they influence our health. And they’ve come along way. We have a much better understanding of how some of these organisms influence our weight, and our susceptibility to certain diseases.

But most of those studies have looked into how these microbes affect an individual person. What scientists haven’t studied very deeply yet is how these microbes travel among people, furniture, and other gadgets within huge communal buildings. A few years ago, a group of researchers from the University of Chicago found the perfect opportunity to do so: A hospital was about to open nearby. The situation was perfect. The hospital hadn’t yet been overtaken by microbes, so researchers could study how humans’ microbiomes colonize a building.

The study, which lasted for an entire year, is one of the largest microbiome studies done yet. Researchers say its results, published today in the journal Science Translational Medicine, will help to guide future studies on understanding the unseen interaction of these tiny microbes and ourselves.

“It was a remarkable opportunity,” says study author Jack Gilbert who heads The Microbiome Center at the University of Chicago. “Established hospitals already have lots of microbial colonization already, and we would not have been able to figure out what was part of the building and what was delivered by the patients, doctors, and nurses.”

Gilbert and his team went into the hospital two months before it opened and took hundreds of swabs from a few different locations including patient rooms and nurses stations. Then, once the hospital opened, they continued taking swabs for the next 10 months. Specifically, they followed patients and staff during the duration of their stay, swabbing their skin and all the places that their skin might touch.

All in all, the results that the researchers found didn’t surprise them. Before a patient came into a room, the area, which had been cleaned with bleach following the previous patients’ visit, consisted of microbes that were similar to the microbes that they swabbed from nurses and other objects in the hospital. Then once a patient came in, for the first few hours their microbiome seemed to almost fight with the microbiome of the room. But the battle didn’t last long: Every time, within a few hours, the patient’s microbiome had overtaken the room and would remain that way for the duration of their stay. This didn’t change, even if the patient received intravenous antibiotics.

The only time when the researchers found that relationship to change, was when the patient was given topical antibiotics, which are meant to kill off dangerous, infection-causing bacteria on the skin. Researchers also found that when patients first spent time in the emergency room, or when they were given chemotherapy, their microbiome diversity was significantly lower. Gilbert and his team hypothesize that’s because patients in the emergency room spend a longer time in the hospital with more microbe interaction, and patients on chemo have a lower diversity due to the indirect effects of the toxic drugs on their skin microbiome.

While this study was very preliminary, and observational only, Gilbert says it provides an essential basis for future studies to determine how our environment influences our health, and potentially how to manipulate it. “The key thing is that the environment must influence [the patients’] health outcomes, but what this study shows is that the microbial exchange we have with the environment is continuous. How is that exchange influencing outcomes?” Now that they’ve built this initial map, Gilbert and his team are interested in understanding follow up questions like, if we were to change the microbial exposure a patient has, how would that influence outcomes and would it affect the rate of infections in a hospital?

Gilbert says one thing he would love to do is bring dogs into the patients’ room and allow them to physically interact with low risk patients to see if that influences health outcomes and recovery times. He says there’s some initial evidence that it does, but no one has figured out what role microbial exposure plays. He also doesn’t want to stop at hospitals. Every communal environment is teeming with microbes. “I would like to do this kind of intense study on a school, especially [studying] viral transmission and how microbial diversity and transmission influences viral infection.”

For now, the researchers have a lot of hypotheses to ponder with this initial, observational study alone—which, to the researchers, is often the most exciting part.