What is botulism, anyway? 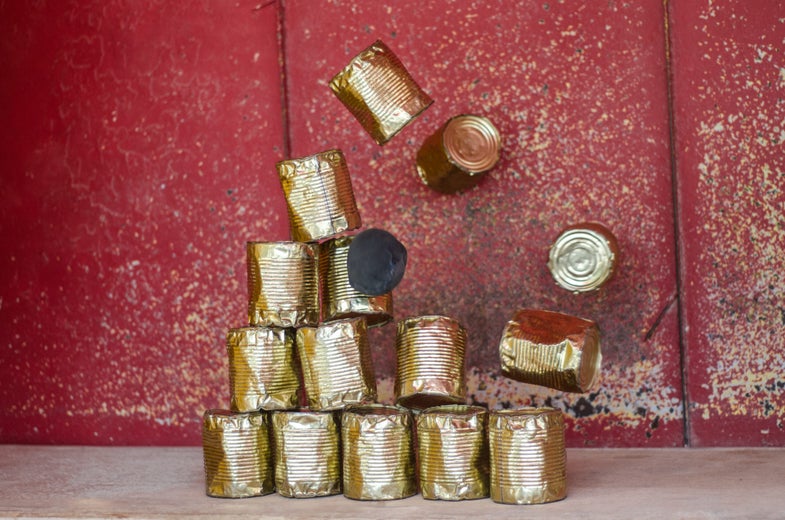 Botulinum toxin is one of the most potent poisons on Earth—less than a millionth of a gram in your bloodstream would kill you—and is perhaps also the most lucrative. It generates over $3 billion in revenue every year for the pharmaceutical industry, where it goes by the name botox.

People inject botox into their faces for the same reason that botulism kills you: it paralyzes your muscles. When a tiny amount goes into your forehead, it effectively relaxes the muscles causing those pesky wrinkles. But let it spread to the rest of your body and you’ll suffocate, unable to inhale.

You don’t hear much about botulism deaths anymore, since we figured out in the mid-20th century that the offending bacteria thrive in improperly treated canned foods. Now the major source is home canning, though plenty of store-bought products can also foster these microbes. Like nacho cheese sauce, for example. A recent outbreak in California has hospitalized nine and killed one, all because a Sacramento gas station sold tainted nacho cheese. The bacteria that primarily produce botulinum toxin thrive in anaerobic conditions like vacuum-sealed cans, so if you don’t kill them off before you seal up the container you’re just providing Clostridium botulinum an ideal home. They’ll hang out in there, multiply, and produce lots of their signature toxin. To the bacteria, this is just a protective measure. They don’t fare well against an adult human’s immune system without it, but armed with a lethal dose of poison they do just fine.

How does botulism kill you?

Botulinum toxin works by preventing many of the neurons in your body from communicating with each other, especially those controlling your muscles. When you move your arms and legs around, the neurons in your muscles are using a bunch of chemicals called neurotransmitters to send signals. In particular, they’re using a neurotransmitter called acetylcholine. Your brain also uses acetylcholine in certain areas, including those parts associated with memory, alertness, and the “fight-or-flight” part of the nervous system. Blocking acetylcholine from doing its job means a widespread shutdown of many of your most basic bodily functions.

And that’s exactly what botulinum toxin does. It prevents neurons from releasing acetylcholine, thereby preventing any of those signals from spreading throughout the body. This is why people who get botox injections can’t move the affected area no matter how hard they try. Your brain can tell your eyebrows to raise all it wants, but the muscles in your forehead are physically incapable of getting the message. That reaction is pretty harmless when it’s injected locally. But if you’ve ingested the toxin, it can spread all over your body and wreak havoc.

Botulism patients present with droopy eyelids, slurred speech, difficulty swallowing, and muscle weakness—all because they’re losing control of their muscles. If the toxin spreads enough, paralysis sets in. Eventually, the inability to power the muscles behind inhalation means patients will suffocate.

Everyone. It’s rare for people to actually get botulism anymore, but since it’s so potent, the toxin can affect absolutely anyone. A healthy immune system won’t help you here.

How do you get botulism?

Quite simply: by eating food contaminated with C. botulinum. Most canned foods are safe at this point because of the way we sterilize cans before they’re sealed. In Alaska, though, there are still regular cases of botulism from the foods native peoples ferment in closed containers. Anyone who’s canning at home needs to be properly kill off bacteria, which is easy enough. The Centers for Disease control has some helpful tips, including boiling food before you eat it.

It’s worth noting here that you don’t get botulism from eating C. botulinum itself. Your body can kill the bacteria pretty easily. It’s the toxin that gets you. If the bacteria don’t have a chance to produce the toxin, they’re virtually harmless. In fact, you’ve probably had some in your stomach at one point or another, assuming that you eat honey. The reality is that C. botulinum grows all over the place, including in soil, and so it’s not uncommon for honey to have some of the bacteria (even if it’s pasteurized). Since honey provides an acidic environment, though, the bacteria aren’t able to produce the toxin. They just sort of hang out in the honey until you eat it and your body kills them off. Babies are a different story. Something about the underdeveloped gut flora and immune systems in infants allow the bacteria to survive long enough to get to the intestines, where C. botulinum is free to produce all the toxin it wants. That’s why doctors recommend that parents keep babies clear of honey until their first birthday.

Can you treat botulism?

Yes! There are two effective antitoxins for botulism, though they can’t reverse nerve damage—they just stop the toxin from poisoning you further. It can take weeks or months for people to heal, and people with serious cases often need respirators until they can breathe on their own. The paralysis usually improves over time.

How do I avoid getting botulism?

Don’t eat things that people canned at home unless you know they disinfected everything properly. Don’t eat canned food if the can has bulges in it. That’s a sign that the food has spoiled, and one of the things spoiling it might be C. botulinum. And maybe don’t eat nacho cheese sauce from gas stations—because even if it’s free of C. botulinum, you know you’re going to regret it.