The ovary substitutes may one day help treat infertility in humans 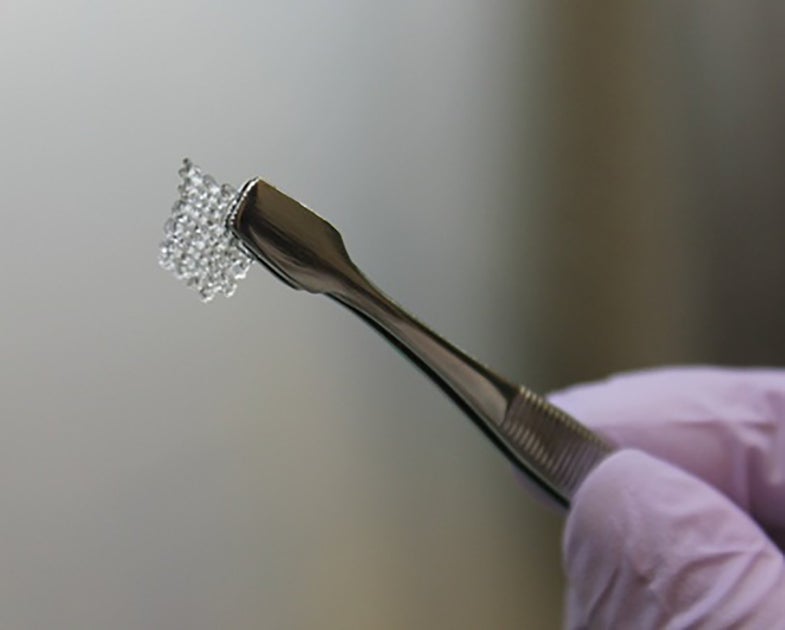 The ultimate goal of 3D printed organs is to be able to churn one out on-demand for any person in need. And we’ve gotten pretty close. Researchers have been growing organs in a lab for the past few decades—and have even successfully transplanted a select few into humans. But it hasn’t yet become routine. This week, in a paper out in the journal Nature Communications, researchers have figured a new technique to grow 3D printed “ovaries”. Mice with these implants were able to give birth to live pups. The researchers say with more work, this technique, or one similar to it, could be used to help women with infertility.

The 3D printed ovaries aren’t exactly what you might be picturing. The technique the researchers used works like this: First they 3D printed a biodegradable scaffold, which holds the cells in and eventually breaks down inside the body. They then placed the mouse’s follicle cells—egg-producing cells that are naturally found in the ovaries—into the scaffold, and then surgically placed that scaffold into the mouse. The new follicle cells allowed the female mouse to ovulate, and eventually give birth to a litter of live young.

That’s all incredibly cool, but this technique is not entirely new. Previous studies have already had success implanting follicle cells into mice to get them to ovulate, and this isn’t the first time researchers have reported live pups as a result. But while previous studies have encapsulated follicle cells in a gel-like substance to hold them in place, the new technique relies on 3D printed scaffolding instead. Once inside the scaffolding, the cells are more stable and controlled, so the researchers wanted to see if this would help the follicle cells survive better once inside the animal.

What they found, says Ramille Shah, a materials science researcher at Northwestern University and a co-author of the study, is that the more sophisticated structure of the scaffolding architecture allowed for a more stable base for the cells. And this stability paid off. The follicle cells survived much better when inside the 3D scaffolding than during previous attempts.

This is all good news for the future of in vitro fertilization techniques in humans. But it doesn’t mean we are there yet. Because this was the first study of this kind, researchers will need to perform many more studies like it before it can be safely tried in humans. But it does represent a step forward. And a needed one at that. The researchers say they hope the technique can help survivors of childhood cancers whose treatments have damaged their ovaries, making them infertile. In the future, they’ll need to determine how long the 3D printed ovaries remain alive inside the body and whether or not they can keep functioning for a lifetime, which is the ultimate goal, Shah says. For now, though, this study is an important stepping stone for others in the field. If this new architectural scaffolding is indeed the most successful, then future work can focus on how to improve it, and make it even more effective.