Glacier mice have no feet, but they still move in herds

Researchers are slowly uncovering how these balls of moss travel across glaciers. 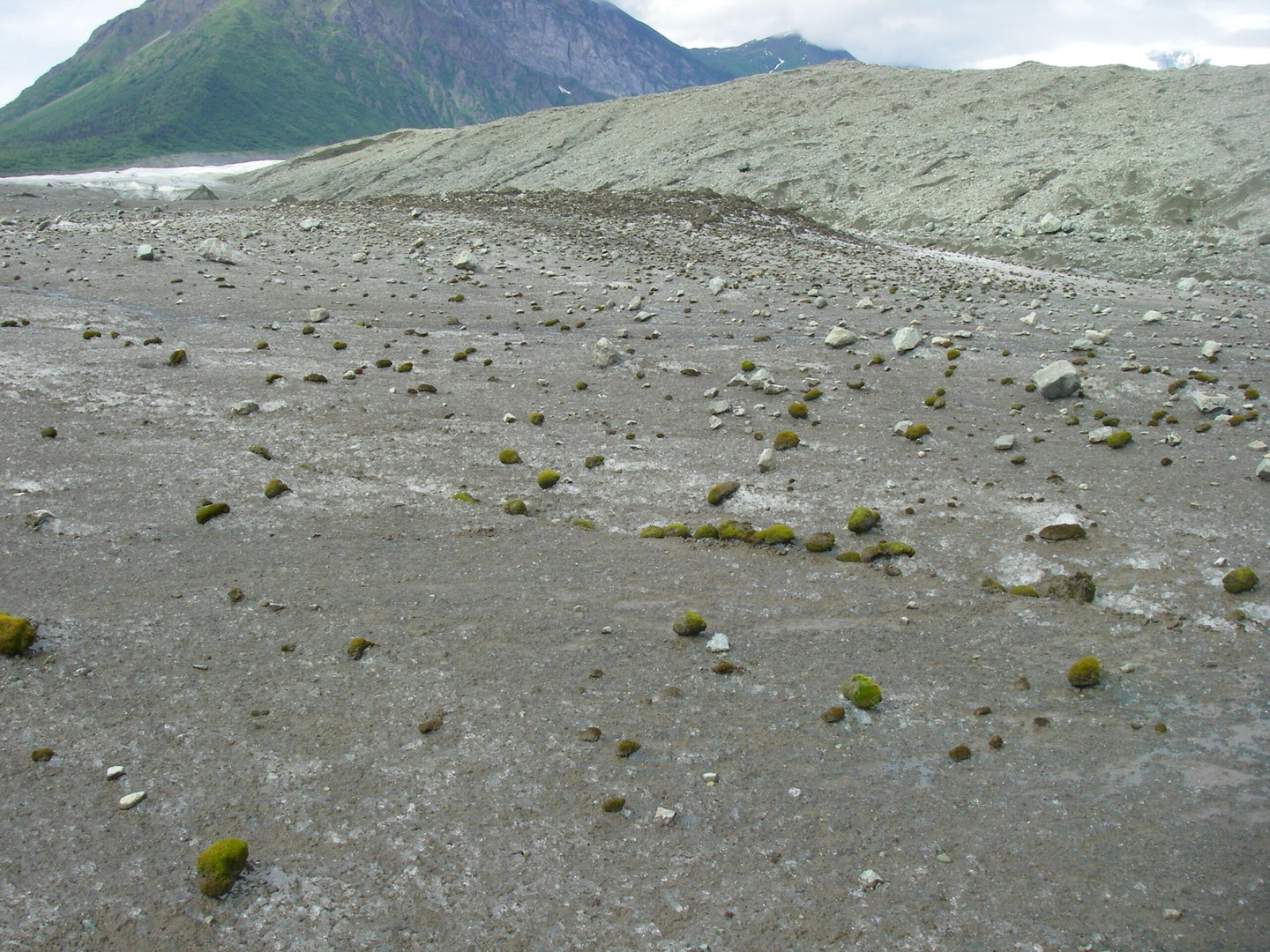 At a science-themed happy hour in a bar located in between the University of Idaho and Washington State University, glaciologist Scott Hotaling was talking about his research on ice worms. It was a late Friday afternoon in 2018. Sophie Gilbert, a wildlife ecologist, and Tim Bartholomaus, a glaciologist and geophysicist, both professors at the University of Idaho, sat at the bar, surrounded by graduate students, postdocs, and professors.

Gilbert and Bartholomaus, who have been married since 2012, first met at an undergraduate research program in the Wrangell Mountains of Alaska in 2006. One day while hiking on Root Glacier, they came across a herd of soft, pillowy clumps of moss—these glacier moss balls, made of moss usually wrapped around dust or sediment, live in small herds on glaciers. After a year of extensive research in 2009, followed by return trips to the glacier for the next three summers, during which they tracked the movements of 30 individual balls using color-coded bracelets, the couple discovered that the ‘glacier mice’ moved in a slow, herd-like motion, traveling around 2.5 centimeters each day. But six years later, that data was still unpublished, lingering in the back of their minds. They still didn’t know why these moss balls in synchronized motion.

Amidst the bar chatter, Bartholomaus and Gilbert decided to take a chance and bring glacier moss balls into the conversation. They asked if Hotaling had ever heard of them. He had— the first scientist they’d met who had prior knowledge of the balls.

That’s when this scientific trio formed. “We just needed to push this project across the finish line but we didn’t have the time and energy to do that ourselves,” Bartholomaus says. Hotaling, who works at Washington State University, brought new energy to the project, and for the next two years they collectively put their noses together. “It was serendipity to meet him,” Gilbert says. The trio published the study in Polar Biology in late April this year.

The study brings to light the mechanisms behind the movement of each individual moss ball. “They block the ice below them, form a pedestal of ice, and they roll off the pedestal,” explains Hotaling. More questions than answers bubbled to the surface—their synchronous motion still remained unsolved. The first possibilities that came to mind were differing angles of solar radiation throughout the day, wind patterns, and gravitational pull downhill. These were all rapidly ruled out after the scientists analyzed weather reports and measured the downhill slope of the glacier. “Now we’re scratching our heads about it,” says Gilbert.

After an NPR news story on these moss balls caught fire on Twitter, the trio started receiving barrages of emails with suggestions from interested citizens and fellow scientists. “It’s been pretty charming,” says Bartholomaus. “So many people are keying in on this mystery.” Bartholomaus and Gilbert have started a running Google Doc full of these suggestions, the most popular of which has been the ‘sunflower effect.’ “Some plants like sunflowers turn their faces toward the sun over the course of the day,” explains Bartholomaus. “Folks are curious if moss balls might do that, and lean towards the sun until they tumble.” As enticing as this explanation might be, Bartholomaus thinks the moss balls are too heavy and squat for the tumbling to happen, and moss growth occurs far too slowly. On Twitter, others have posited their own suggestions—one user retweeting the NPR article with the caption, “Well played, Disney. The live action version of Frozen is just what the public needs now.” Other users referenced tribbles, a fuzzy alien species from the television series Star Trek.

When asked about his own hypotheses on the coordinated movement, he wondered aloud about the uneven shape of the moss balls. “The moss balls aren’t perfectly round,” says Bartholomaus. “I wonder if they have a fat end and a skinny end, and roll always to the right or left.”

While research plans have been put on pause due to COVID-19, Gilbert and Hotaling anticipate timelapse videos, to be compared to broader weather pattern data, as the next step. Bartholomaus also hopes to work with a volcanologist to investigate the dark sediment that covers Root Glacier, which he thinks might be volcanic ash. This may help explain why glacier moss balls exist only in Alaska and parts of Iceland—where volcanoes are still active. “I’m wondering if there’s some kind of combination of volcanic ash and glaciers that enables moss ball clusters,” says Bartholomaus.

For now, these moss balls remain a mystery. But even as we’re still figuring them out, Hotaling thinks the research and buzz surrounding these glacial life forms is essential for raising awareness of glacial ecosystems, which are among the most rapidly disappearing places on earth. Although glaciers may seem like gleaming expanses of ice, devoid of life, glaciers are hubs of activity and may have a deeper impact on global climate than we think. These moss balls are just a narrow glimpse into the richness of these ecosystems. Each sphere is teeming with invertebrate life, hosting creatures such as tardigrades, commonly known as water bears. Spiders crawl over the moss balls, feeding on the invertebrates, according to Gilbert. And Hotaling says there are still more questions to answer: “Are there birds that feed on invertebrates? What’s the broader ecosystem doing?”

Each year, glaciers around the world grow thinner by a foot and half. “Every time a glacier is lost, I wonder, what cool stuff was living there?” says Hotaling. “What went away with that? Were there ice worms? Moss balls? What biology was also present and wasn’t even studied? It’s like when an acre of rainforest is cut down and we wonder about what was lost.”