How did ancient frogs move between America and Australia? Easy: They hopped across Antarctica. 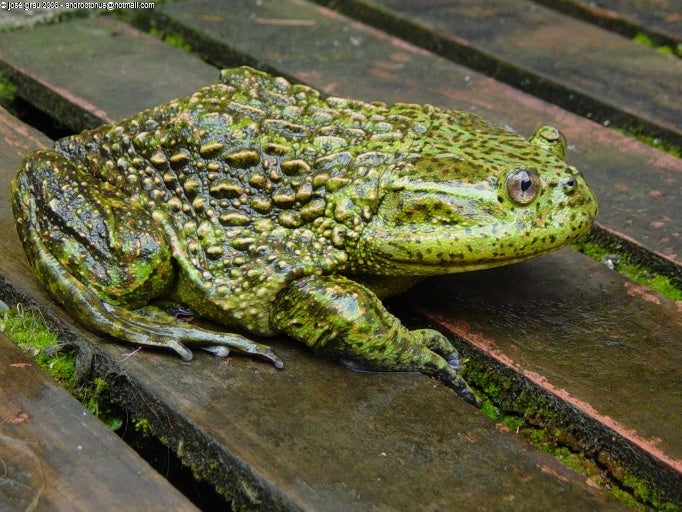 It’s no secret that millions of years ago, the world looked wildly different than it does today. Continents now separated by massive oceans were once next-door neighbors, and today’s frozen wilderness was temperate and green.

And back in those days, it wasn’t cute emperor penguins hopping around Antarctica—it was ancient horned frogs. Swedish scientists discovered 40 million-year-old fossils of the little amphibians on Seymour Island, the only Antarctic spot where sediments aren’t hidden under masses of ice, and published their findings in Scientific Reports last week.

“Frogs, nowadays, are known on all six other continents,” says Thomas Mors, the lead author of the study and senior curator at the Swedish Museum of Natural History. “Now we know they were also present on the seventh.”

The little croakers that inhabited the icy wasteland millions of years ago weren’t exactly a one-of-a-kind species. The newly discovered amphibian’s skull and ilia, a part of the pelvis, were a dead ringer for the same body parts in a South American frog genus called Calyptocephalella. Just one species from this genus remains in the modern world—the helmeted water toad, which hops around the Andes in Chile.

Up until now, the closest cousins to the Calyptocephalella were found in Australia, which is quite a hike from Chile. This newly discovered frog “ties” the two in a way, Mors adds, which provides support for the existence of Gondwana—an ancient “supercontinent” that formed after the original landmass of Pangea spilt in two.

Millions and millions of years ago, Gondwana included what we now call South America, Africa, Arabia, Madagascar, India, Australia, and Antarctica. By the Jurassic period, about 180 million years ago, this giant continent started splitting up into slightly more recognizable chunks.

So while it sounds wild that close froggy cousins might be found all the way from South America to Australia, back when these creatures started evolving, Antarctica was a perfectly accessible midway point between the two locales.

This study shows how these frogs got their start on one massive ancient continent, allowing them to branch off around the world, says David Wake, an amphibian expert at the University of California Berkeley who was not involved in the study. “It represents the breakup [of Gondwana].”

Because the lost Antarctic critters are close cousins of frogs we’re already familiar with, their remains also provide insight into what the area’s climate was like back before it froze over. Using climatic analysis, the researchers hypothesize that ancient Antarctica was wet and temperate, with annual precipitation of around 900 millimeters per year.

For Wake, this kind of study is a perfect example of paleontology in action. There’s more to the field than just bouncing around the globe, digging up things, and hoping for the best. Without knowledge of Gondwana, it’d be pretty bizarre to posit that a frog ever hopped around Antarctica—let alone a specimen extremely similar to frogs spotted today in Chile. Understanding geological context allows people studying fossils to actually understand them.

One aspect of the discovery that Mors finds particularly intriguing is the fact that this fossil predates the freezing over of Antarctica by six million years. Now, he’s curious about how close to the freezing point these frogs survived, and what other animals might have been cozying up in Antarctica’s ancient freshwater ecosystems alongside them.