The polar vortex is bringing snow to the US this weekend, because chaos loves company

The polar vortex is swooping in to cool down our spring. 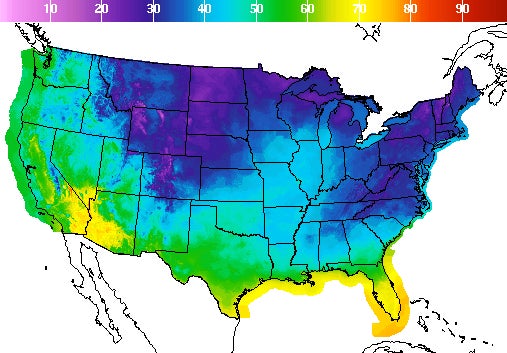 The cold front will start moving in on Friday. By Saturday night, things will be chilly. National Weather Service
SHARE

Parts of the United States could have rare May snowfall this weekend. You read that correctly: The Midwest, Mid-Atlantic, and Northeast regions of the US will have record-cold temperatures, and some areas will dip below freezing. Cities in New York, Pennsylvania, and Vermont could see snow, with parts of northern New England possibly getting up to a foot of wet, heavy snow—handily breaking current snowfall records for this time of year.

As much of the nation continues to shelter at home to prevent the spread of COVID-19, atmospheric forces seem to be conspiring to keep us inside. The culprit is the dreaded polar vortex, a climate phenomenon associated with bitter cold snaps that usually have the good sense to occur during late fall or winter.

Hearing about the polar vortex in May is a little bit like running into your dentist at the circus, so don’t feel bad if you need a reminder of how it all works. The North and South Poles of the planet always feature giant areas of cold, swirling air. It’s the northern polar vortex that tends to cause trouble for the United States: In the winter, this chilly counter-clockwise cyclone gets bigger, which makes it less stable. When the polar vortex is tight and controlled, the difference in air pressure between the frigid poles and the hot air near the equator creates a neat and tidy jet stream—a high-speed band of air racing from west to east that influences much of our weather.

But when the polar vortex gets bigger, it’s less likely to hold itself together as a strong, unified region of low-pressure air. That means the jet stream gets more wobbly. Pieces of the bloated and weakened polar vortex frequently get caught up in these atmospheric rivers, sending icy temperatures as far south as Florida. This almost always happens in winter, when the polar vortex is most likely to grow larger. But while this past winter featured a fairly controlled polar vortex—keeping the worst cold snaps at bay—an unusually late-in-the-season weakening is sending Arctic air our way in May.

This is “one of the coldest modified polar air masses on record so late in the season,” Michael Palmer, a meteorologist at the Weather Company, told CNBC. Highs and lows in affected areas will be 10-20 degrees lower than average, and NBC reports that more than 50 temperature records could be broken or tied. Temperatures are expected to hit the 30s as far south as Nashville, TN and Huntsville, AL. Many areas that have already begun their spring growing seasons could have frost. If you can bring your plants inside, do so; if not, here are some tips on how to keep your newly-planted garden as snug as possible.

Meanwhile, the same wibbly-wobbly jet stream is bringing heat waves to the Southwest. While a hot May day in LA is less discombobulating than snow in New York occurring that same weekend, these warmer temperatures are also breaking records in some spots. Some officials have expressed concern for elderly residents of these regions, who are advised to stay inside due to their higher risk of death from COVID-19. But those at-risk people may not have air conditioning, making their homes incredibly dangerous if they get too hot.

“We have millions of people who are aging alone who feel like they need to stay indoors,” Eric Klinenberg, a professor of sociology at New York University and the author of “Heat Wave: A Social Autopsy of Disaster in Chicago” told the Los Angeles Times. “And social isolation combined with extreme heat is a proven killer.” Here are some tips for keeping your body temperature down in hot weather—even if you don’t have access to AC.

Some researchers have suggested that a warming Arctic may contribute to the instability of the polar vortex and the jet stream, but more evidence on the connection is still needed. For now, we do know that the temperature contrasts that keep jet streams stable have decreased. In any case, one thing is definitely true: Record-low temperatures in May don’t mean the planet isn’t getting hotter due to climate change. Here’s more information on how a warming world can produce frigid spring storms.