Mangrove plants flourish on coastlines, but rising seas may outpace them by 2050

The world’s mangroves are under threat from climate change 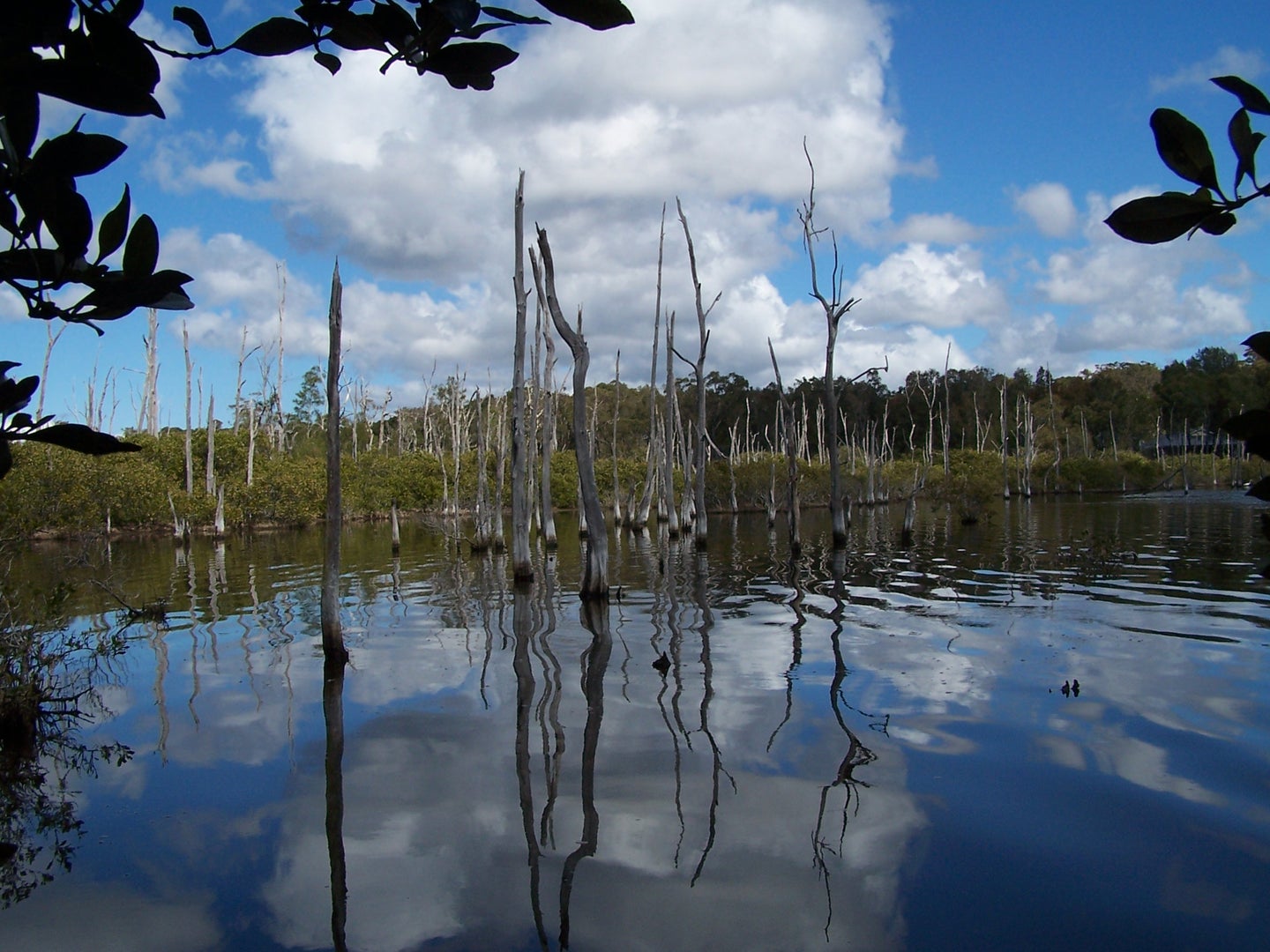 Mangrove trees and shrubs grow along tropical and subtropical coastlines, thriving in conditions that would kill most other plants. Mangroves also absorb a lot of excess carbon dioxide from the atmosphere. Kerrylee Rogers
SHARE

If we don’t curb fossil fuel emissions, mangroves around the world will be drowned by rapidly rising seas, researchers reported June 4 in the journal Science. The scientists used sediment cores to examine how the ancestors of today’s mangroves responded to sea level rise thousands of years ago. They found that when the seas rose more quickly than 6.1 millimeters per year, mangroves were typically unable to survive. The team concluded that there’s only a 6.2 percent chance that mangroves will be able to keep growing without being overtaken by the encroaching water by 2050.

“Rates of sea level rise in many tropical coastlines are going to exceed 7 millimeters per year in [2050], so there’s a very low probability that they’ll be able to sustain growth,” says Erica Ashe, a climate data scientist at Rutgers University-New Brunswick and a coauthor of the new study.

Mangrove trees and shrubs grow along tropical and subtropical coastlines across the Americas, Asia, Africa, and Australasia. They thrive in conditions that would kill most other plants, with salty water flooding over their roots whenever the tide comes in. These roots shelter vulnerable young fish and crustaceans, many of which are eventually caught by fishers. Mangroves also absorb a lot of excess carbon dioxide from the atmosphere; per acre, Ashe says, they store more carbon than rainforests do. Additionally, they protect the coastline from strong waves and storm surge and trap sediments within their ever-growing root systems, processes that prevent erosion and increase the elevation of the soil.

As tough as mangroves are, they are in a precarious position. With greenhouse gas emissions fueling climate change, seas around the world are swelling as warm water expands and land ice melts. “Under low to moderate rates of sea level rise they are able to ‘keep pace’ with sea level rise, literally by building up the land surface,” Neil Saintilan, an ecologist at Macquarie University in Australia and a coauthor on the study, said in an email.

Saintilan, Ashe, and their colleagues wanted to determine the threshold at which mangroves become unable to cope with rapidly rising seas. They examined published data from sediment cores extracted from 78 tropical and subtropical locations. These cores contained evidence of bygone mangroves: bits of preserved pollen and roots and distinctively dark, carbon-rich sediments trapped by those roots.

The researchers used this record to figure out when and where mangroves were growing from roughly 10,000 to 7,000 years ago. During this time, melting of the Laurentide ice sheet, which once covered much of Canada and the northern United States, caused sea levels to rise rapidly in many places before slowing down and eventually stabilizing. Computer modeling allowed the team to estimate how quickly sea levels changed over time at the sites where the cores had been collected. “Generally, as sea level [rise] decelerated we would see these mangroves take hold,” Ashe says.

However, all is not lost—we still have a chance to save mangroves from a watery grave. By protecting shoreline habitats from development, we can leave mangroves room to retreat inland. And by significantly cutting greenhouse gas emissions, Ashe says, we can keep the rate of sea level rise below the threshold where it will overtake mangroves in many areas.

“We have demonstrated that mangroves can largely survive the rates of sea-level rise projected under the low emissions scenarios that we expect to occur if greenhouse gas emissions are controlled (under the Paris Agreement, for example),” Saintilan said. “The future of the world’s mangroves is in our hands.”