An Artist Is Growing A Skeleton Human Hand In A Lab

Amy Karle aims to connect the body and technology 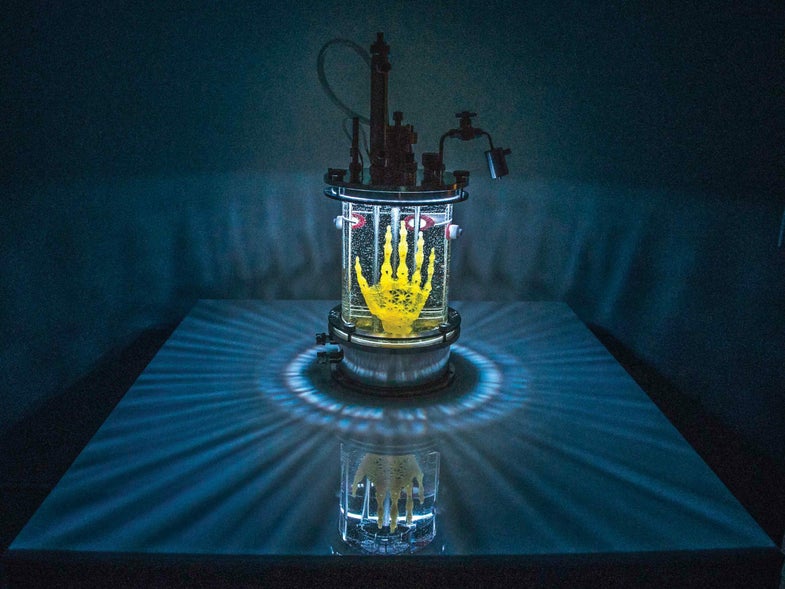 New-media artist Amy Karle has always been enthralled by science. She grew up around her mother’s medical research lab and studied genetic engineering in college. Now Karle, who previously performed an art piece where a computer mapped her biofeedback as she meditated, is growing a skeletal human hand.

In the first step of the creative process, Karle and a team of experts scanned the bones of a female hand as the basis for a digital model. Then they gave the model pores and other microstructures that make it mimic bone. Karle 3-D-printed this scaffolding out of a biodegradable, nontoxic hydrogel. Finally, the team seeded the hydrogel with human stem cells and placed it in a bioreactor—a container to keep the project alive. Over the next two years, Karle wants the cells to grow over the frame and develop into bone.

“We’ll see if the cells have a mind of their own,” she says. “I like to step back and let the artwork take over.”

Karle hopes her work will inspire scientists who are growing bone for medical use. “I have an opportunity to bring attention to this type of research,” she says. The hand also raises questions about growing body parts in a lab. “We are at an exciting time where we no longer need to turn to inanimate materials to make an object,” she says.

This article was originally published in the September/October 2016 issue of Popular Science, under the title “Lab-Grown Bones on Display.”