A new study suggests that astronauts may experience space anemia much longer than previously thought. 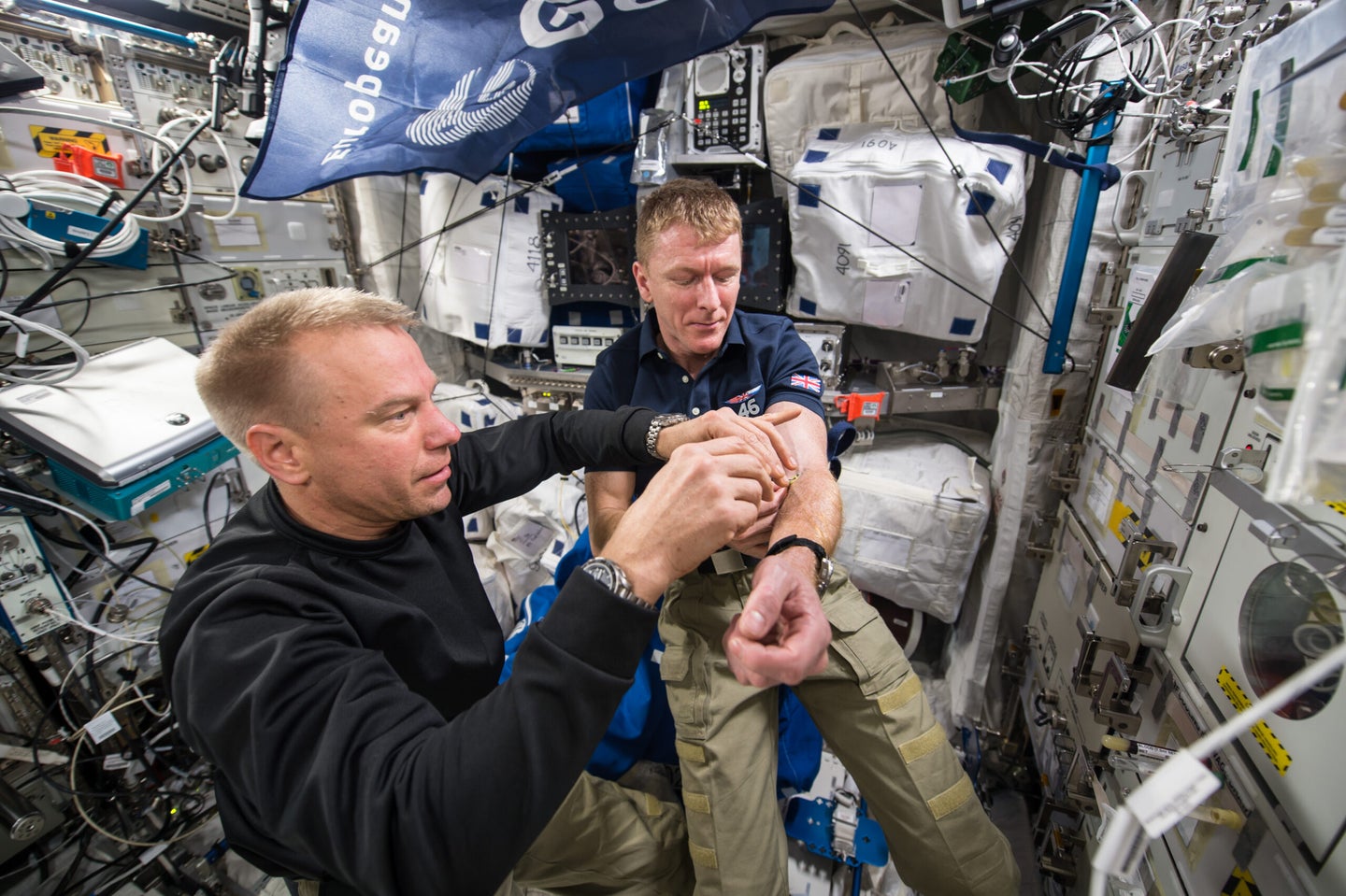 Astronaut Tim Peake (right) completes a blood draw in space. The sample was taken as part of the MARROW experiment. NASA
SHARE

Scientists have long known that life in space places a physical toll on an astronaut’s body. As humankind continues to plan longer and more distant missions beyond Earth, understanding how space impacts health is imperative to both safe and successful journeys.

Since early crewed missions, astronauts returned from space with anemia—a condition in which the body lacks enough red blood cells to carry oxygen to the body’s tissues. Anemia is just one of the health issues observed in astronauts. Health experts were stumped on how this happens, but a new study in Nature, funded by the Canadian Space Agency (CSA), reveals the mechanisms that contribute to this potentially harmful condition.

When astronauts come back to Earth, they’re treated like a person coming back from an injury, says lead author Guy Trudel, a rehabilitation physician and researcher at the Ottawa Hospital and professor at the University of Ottawa. “We want to know how fast they recover, and how full the recovery is.”

[Related: Astronauts lose weight in space, and it might be because their food is literally floating around inside them]

It was previously thought that this anemia was only temporary, signaled by a 10 to 12 percent decrease in red blood cell count during an astronaut’s first 10 days in space when the body’s fluids shifted to adjust.

But Trudel’s study reveals that this process doesn’t stop in space, but that the anemia actually continues for the next six months.

Trudel and his team first demonstrated the cause of space anemia, but created methods that differed from previous studies, which analyzed blood samples and radioactive injections. Instead, his team analyzed both breath and blood samples. “Just taking blood is not enough to know about destruction, and that’s why this knowledge was hidden for so long,” he says.

Between 2015 and 2020, the samples were collected from 14 astronauts (11 men and 3 women) before they left Earth, during their stay on the International Space Station (ISS), and once again when they returned. Trudel’s team measured the concentration of carbon monoxide molecules left behind in the astronaut’s breath when the blood degraded—a sign that, if high, indicates an increase in red blood cell destruction in the body. They found that this destruction, or hemolysis, was a “primary effect” of microgravity, which indicates that the anemia is caused by the astronaut’s environment.

Although the specimens were collected from astronauts on six month missions, the researchers reasoned that longer space missions could cause more severe anemia.

Nearly 25 percent of the population already has some form of anemia, according to the World Health Organization. This latest discovery could be used to enforce stricter health requirements for astronauts assigned on longer crewed missions, and individuals interested in signing up for space tourism.

Their findings are some of the first to come out of MARROW, a CSA-led investigation looking into the effects of microgravity on bone marrow—a type of tissue that contains stem cells, which help with red blood cell production.

Dorit Donoviel, director of the Translational Research Institute for Space Health at Baylor College of Medicine, says that studying diseases in space can be challenging, but is a fascinating way to study our own physiology.

Because Earthbound research studies on human health are often focused on disease, rather than baseline conditions, space has become a prime location for medical research. “And so the astronauts are healthy, normal people that are put into an extreme environment that really changes things in their bodies,” says Donoviel, who was not involved in the study.

One of the reasons the recent anemia study is so interesting, Donoviel says, is because it helps space experts understand what is “healthy and normal for an individual,” especially as humans continue to venture to places with harsh environments, like the moon and Mars.

However, Donoviel is skeptical of one aspect of the study: According to Trudel’s research, after leaving the ISS astronauts continued to experience anemia even up to a full year later, meaning that their red blood cell count never returned to pre-flight levels. “I would be more convinced if they had more than one baseline measurement for these people,” she says.

Donoviel says more research needs to be done to validate the finding before completely concluding that space has long-term effects on blood. But along with more tests, one thing many experts are looking forward to is developing countermeasures that could help the overall health of future astronauts, and prevent or treat blood-related illnesses.

But before that can happen, Donoviel says she’d like to see the ISS install a laboratory capable of doing more in-depth analyses.

“We’ve been up there for 20 years, we even have the National Lab, and all the samples have to come back to Earth,” she says. “If we had the capability of studying complete blood counts in orbit, and it was easy to do, we probably would have had this finding a long, long time ago.”