How the ISS recycles its air and water

Nearly all of the water astronauts drink and shower with comes from their urine and sweat. 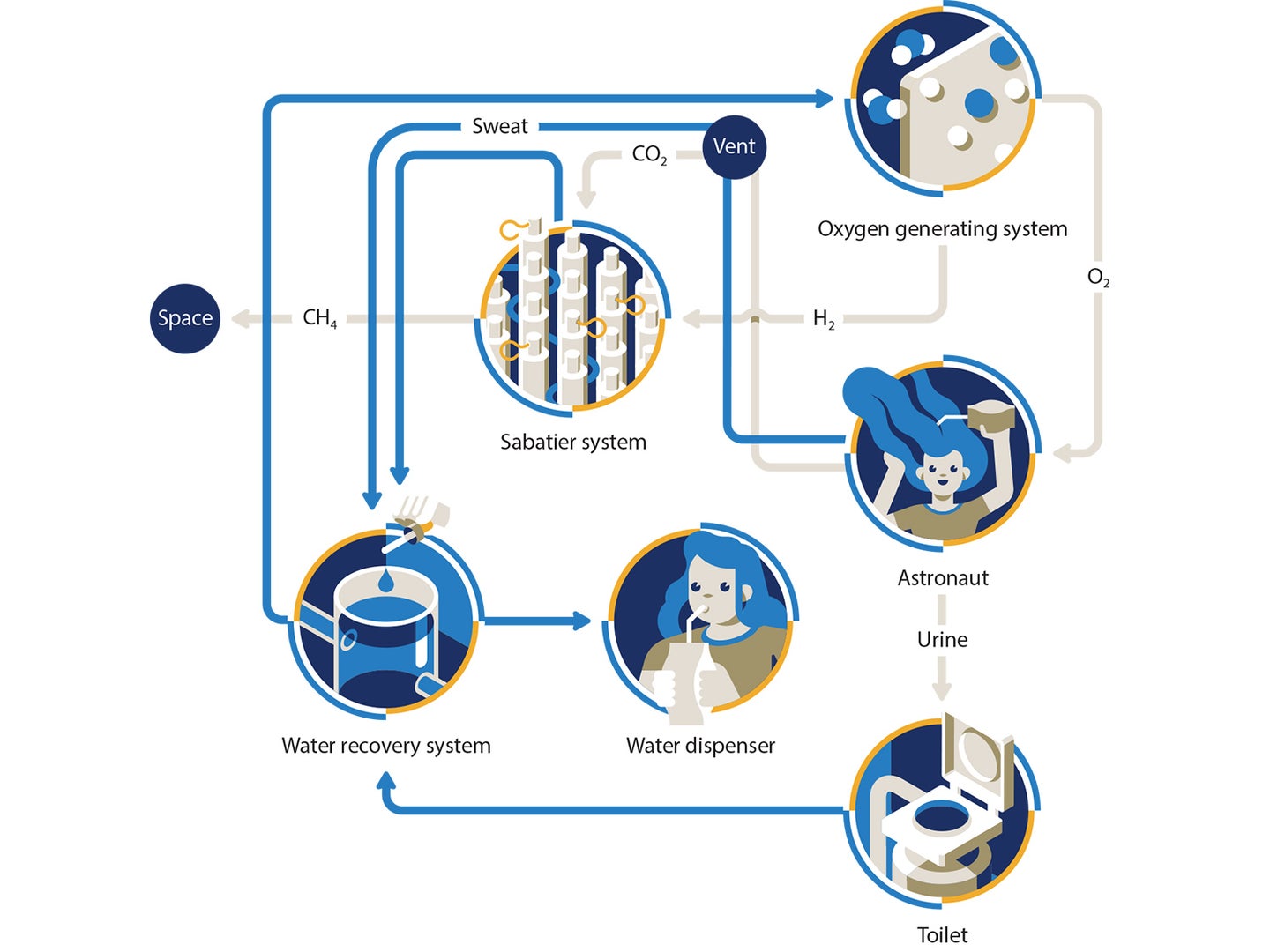 Storage is hard to come by aboard the International Space Station. Even if a rocket had room to ferry thousands of pounds of water and oxygen to supply a six-month mission, you’d struggle to find anywhere to stash it. So engineers have devised creative ways to squeeze essentials from astronauts’ sweat, urine, and breath. But we’re not at total recovery yet. Right now, the ISS recycles 90 percent of its water—or more than 1,000 gallons annually—and 40 percent of the oxygen astronauts breathe. The rest comes up on resupply missions. This diagram shows how NASA gets so close to a self-­sustaining space home.

An Earth-bound human uses about 80 gallons of water each day, but an ISS resident stretches just one for drinking, showering, and hydrating food. Astronauts’ bodies produce plenty of sweat droplets and ­carbon dioxide, both of which get sucked into vents, destined for recycling.

When astronauts go number one, a slight vacuum in the toilet pulls urine into a low-​­pressure chamber, which forces the water to evaporate. This results in a salty brine, which resupply vehicles later jettison to burn up in the atmosphere, and water vapor, which heads off for decontamination.

H₂O can perform double-duty if its atomic components separate. Behind the walls of the U.S. lab, an electrified membrane splits the molecules. Oxygen pumps into the cabin while hydrogen heads to a specialized reactor, a Sabatier, to become water again.

Inside this machine, a blast of roughly 750°F heat breaks the bonds inside CO₂, forcing it into its constituent elements. The carbon and oxygen combine with hydrogen from the station’s ­oxygen ​­generating system to make H₂O and methane (CH₄), the latter of which vents into space.

Reclaimed water flows into a chamber in the U.S. Lab module, where an ­OxyClean-​like reaction zaps odor-​­causing molecules and kills bacteria. A shot of iodine eliminates any potential stragglers, but astronauts test the water regularly just to be sure.

Astronauts fill small metallic pouches and suck hydration through a straw, or squeeze water through a syringe onto dehydrated food. To shower, crewmembers pipe moisture directly onto their skin and hair, then mix in no-rinse shampoo to keep ­post-​­workout smells in check.