The Treblab HD77 is an affordable outdoor speaker alternative perfect for a patio. 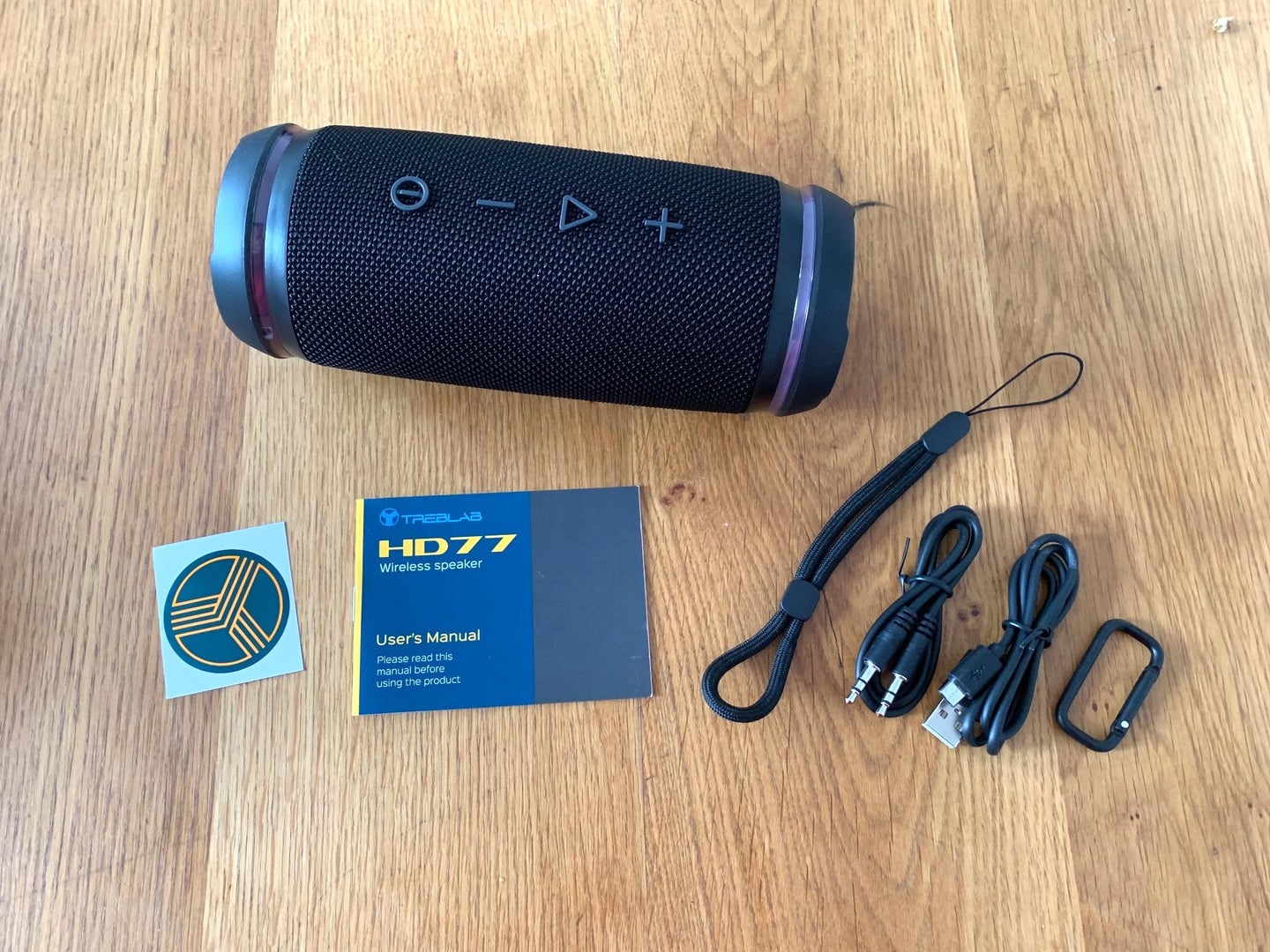 The Treblab HD77 is outfitted to get you going on the go. Carsen Joenk
SHARE

Treblab is reasonably new to the audio scene, only churning out affordable Bluetooth speakers and headphones since 2015. Almost all of Treblab’s products, excluding the HD-Max Speaker, retail for under $100, positioning them as more affordable alternatives to wireless speaker staff favorites from companies including JBL and Ultimate Ears. The Treblab HD77 is a portable Bluetooth speaker that can accompany you to a backyard BBQ or a backcountry hike, though maybe not a bathtub soak or beach party. It’s similar in design to the JBL Charge 5 and Flip 5, so let’s see how the $89 HD77 stacks up against those outdoor speakers.

Comparable in size to a 16-ounce can of seltzer, the HD77 speaker is almost the exact same size as the JBL Flip 5. At 7.3 inches by 3 inches by 3 inches and weighing in at 21.92 ounces, the HD77 is comparable within a quarter of an inch or so. Treblab’s speaker comes with a similar removable carrying strap, as well as a carabiner for easy attachment to a backpack, bike basket, or even a belt loop. Other accessories include a 3.5mm auxiliary cable and a micro-USB charging cable, though you’ll need to supply your own power block.

The HD77’s sleek black exterior features an easy-to-grip grille and two smooth, impact-resistant plastic cylinders housing two passive bass radiators. An LED ring, reminiscent of something out of “Tron,” adorns each end of the speaker, glowing blue when it’s turned on and red when powering down or charging. A flat base keeps the speaker stable on most surfaces and features a discrete, pull-away panel that allows you to connect an auxiliary or DC 5V cable. The overall look is versatile; it’s both techy (see the LED ring) and rugged (a nod to the texturized grille), a suitable combo for a Bluetooth speaker that’s designed to be outdoors-friendly.

I can personally attest to the HD77’s shockproof design after it took an unfortunate tumble off my coffee table during a particularly intense game of Uno. Still, neither the interior nor the exterior suffered any damage. That being said, you don’t want to be too reckless when it comes to wet or sandy environments. The speaker is rated IPX6: “X” means the speaker has not been rated at all for resistance to small particles, so I wouldn’t place it directly in the sand or dirt, and “6” suggests it’s protected from high-pressure splashes, but that doesn’t mean it will survive total immersion.

Though the HD77’s description might declare it’s a waterproof speaker, this is not a speaker you want to let float alongside you in the pool or bring into the ocean. However, you won’t need to worry about any damage from partygoers accidentally spilling punch on it. While the HD77 is fortified against drops of water, you’ll want to do your best to keep a substantial amount away from the speaker’s base at all times because the ports hidden inside the pull-away panel are more susceptible to damage from liquids. I didn’t push my luck too far but did purposefully subject it to a few sink splashes…and it may have come into contact with a minimal amount of beer during the aforementioned Uno game. All in all, the speaker made it out of both incidents completely unaffected, which bodes well for any other accidental spills or brief stints in the rain while looking for cover.

Setting up the Treblab HD77

Setting up the HD77 Bluetooth speaker is easy and intuitive. It functions like many other wireless speakers, with four rubberized multifunction buttons at the top to control power/Bluetooth pairing, play/pause, and volume up and down (which also triggers a skip forward and back, respectively). I never realized how much I needed a replay button until I accidentally skipped my favorite song and couldn’t easily go back while jamming with my JBL Charge 5 during an at-home workout, so kudos to the HD77 for letting you just hold down the volume-minus button for a quick repeat. You can also use the play/pause button to answer, hang up, or reject a phone call.

Pairing is quick and easy; just hold down the power button until you hear a sound cue and see a flashing blue light. I had no issues connecting my phone or computer, just keep in mind only one device can be connected at a time. With a standard 33-foot Bluetooth signal range, you can wander fairly far away from the unit before the connection becomes spotty, especially if you’re outside. My apartment walls are circa 1905, which means they are particularly thick. When I walked into another room the connection was susceptible to drops, even if I stayed within range, though this has been true of almost any wireless speaker I’ve ever tried.

All Treblab’s speakers are True Wireless Stereo, letting you connect two units for stereo sound. The pairing process, however, is slightly complicated. First, you’ll need to pair the primary (or left channel) speaker with your iOS or Android smart device then, once connected, you’ll turn Bluetooth off on your smart device and power down the primary speaker, turn on the secondary (right channel) speaker, double click the primary speaker’s power button, and you should see LED lights flash blue and green, indicating successful pairing with the secondary speaker. You can then turn your smart device back on. It can be tricky to get this done on the first try, but you shouldn’t have any trouble once connected. Stereo sound is certainly preferable, and the added volume boost is excellent for parties. Keep in mind, the HD77 uses Bluetooth 5.0, which means it isn’t backward-compatible with Treblab products that use Bluetooth 4.2, though older smart devices shouldn’t be a problem. When in doubt, you can use the analog auxiliary connection to pump up the jams (assuming you have a compatible output on your device).

The biggest question with any budget speaker is, naturally, “Does it sound good?” While the HD77 can’t really hold a candle to wired speakers or more expensive Bluetooth models, it does the trick for under $100. As with most compact cylindrical portable Bluetooth speakers, the 12.5-watt drivers are configured to provide 360-degree sound and DualBass radiator technology supports the low-end, though some may find it lacking, which makes sense given that the HD77’s frequency response is 80 Hz – 16kHz. It’s not exactly enough range to produce quality bass guitar licks, thumping kick drum beats, or expressive sub-bass. However, this is true for most small, Bluetooth speakers, budget-friendly or not.

The midrange is pretty clear and certainly forward in the mix; Brian May comes through beautifully and Freddie Mercury sounds great on Queen’s “All Dead, All Dead.” However, more complicated, harmonic vocals, like those found on Brown Bird’s “Severed Soul,” can get a bit muddy. The Treblab HD77 speaker performs best with high-energy pop and hip-hop mixes; the high-end is bright, albeit lacking some clarity, and the bass is just punchy enough to blast Olivia Rodrigo’s “Good 4 U” or M.I.A.’s “Paper Planes.”

Volume-wise, the speaker can get loud, just not as loud as its JBL contemporaries. I was able to listen comfortably to the max volume while inside my apartment but noticed a fair amount of distortion while doing so. The unit itself doesn’t tell you how close you are to reaching its threshold, but if you try and push it over the edge, it will inform you by blinking its LED lights red. Many online reviewers tout the HD77’s impressive volume capabilities, but I quickly got flashing warning lights. However, the clarity and volume were super-satisfying when I took it outside for a quick park picnic. It was exactly what I wanted when it came to the extra ambiance. Though I didn’t have the opportunity, I can see it performing well on the hiking trail when you just need a little pick-me-up to boost your energy but don’t need to blast the music in order to get moving.

The HD77 features a 5200mAh battery and touts 20 hours of playback on a low volume, 12 hours at a moderate volume, and 9 hours at high volumes; playing music using the aux cord can extend this time. The charging time is four hours, which means as long as you remember to plug it in overnight, or at least remember when you wake up in the morning, you won’t run out of battery during the day. However, unless you’re keeping track, it’s difficult to tell how much battery is left…until it’s not. When the HD77’s battery hits roughly 3 percent, which is a relatively low level for notification of impending shutdown, loud warnings will repeat every 30 seconds. If you’ve taken this portable speaker somewhere you can’t immediately plug in the speaker, it won’t be work playing through the last 20-30 minutes of charge. However, the speaker can still play music while charging, so if you happen to be home, you can keep the party going.

The Treblab HD77 premium speaker notably features a built-in cVc 6.0 microphone and the ability to answer or reject calls straight for the speaker body. Call quality fluctuated, but much of that had to do with solid service. I brought the speaker on a quick trip outside of the city and noticed that clarity dipped significantly when I only had two bars, even if I could hear well via the phone’s internal speaker or through my AirPods. Despite the fuzz on a few calls, when service was strong, I could hear clearly, though I had to stay close to the speaker for friends and colleagues on the other end to make sense of what I was saying.

The HD77 doesn’t deal in fancier features like apps, voice-assistant capabilities, or onboard EQ, but I didn’t miss them. The HD77 is a portable speaker offering good sound without bells and whistles. I would rather have acceptable sound with a strong battery than deluxe features that don’t work with the limited sound profile.

So, who should buy the Treblab HD77?

The Treblab HD77 bluetooth speaker is a great little speaker to throw in your backpack on your way to an outdoor hang, walk in the woods, or poolside perch. While it’s not going to take home the gold when it comes to waterproof Bluetooth speaker features or sound quality, it’s a solid option that could earn a spot among the best portable Bluetooth speakers for those on a budget. If you want something similar and you’re ready to up your spending just a bit, check out the $120 JBL Flip 5 (reviewed here), and if you don’t mind carrying around a little extra weight, investigate the $180 JBL Charge 5 (reviewed here). However, if you’re prioritizing portability and price, the HD77 is a powerful companion with a straightforward setup, excellent durability, and solid sound. Simply clip the carabiner to your bag and enjoy your favorite music and podcasts wherever you are.

Carsen is a sound designer and freelance writer focusing on music and technology. She has been writing for Popular Science since early 2020, contributing product reviews and recommendations, with an emphasis on great sound you can take with you on the go. She lives in Brooklyn amongst a growing vinyl collection, exactly three plants, and a fridge full of popsicles.