From the backyard to the beach, the JBL Charge 5 will keep you energized. 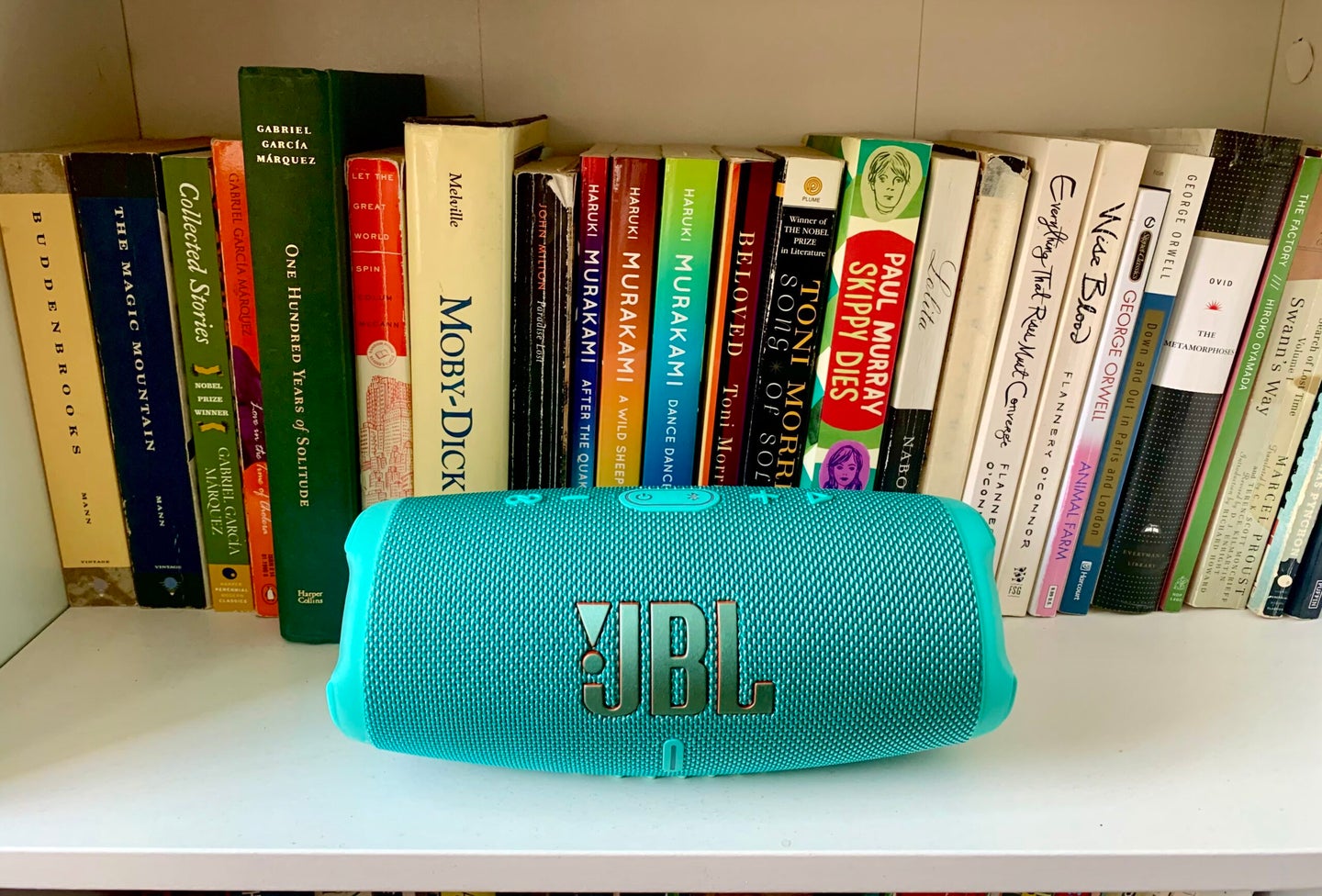 The compact but capable JBL Charge 5 can power your next party. Carsen Joenk
SHARE

JBL started manufacturing loudspeakers in 1946, so by the time the company decided to get into portable Bluetooth speakers it had plenty of engineering knowledge to draw on. Other than leaning on history in energetic live sound, however, JBL doesn’t look to the past for its party speakers. The JBL Charge 5 speaker is, as the name suggests, the fifth generation of a regularly refreshed speaker known for both its big sound and substantial battery. And with each iteration, JBL Bluetooth speakers are made a little more durable and dynamic. Comparable in size to a heartily stuffed burrito, the latest version of the Charge is now dustproof, has more drivers, has updated Bluetooth—all without sacrificing its impressive 20-hour battery life—but at $179 it also costs more than the $149 Charge 4, as well as similarly sized speakers. So is the Charge 5 still the best portable Bluetooth speaker for long weekends? Let’s read this JBL Charge 5 review and find out.

At first glance, the JBL Charge 4 and Charge 5 are similar in size, measuring around 8.7 inches by 3.8 inches by 3.7 inches and about 2.1 pounds. But as soon as you see the bold, blown-up JBL logo with its prominent exclamation points stamped on the front grille, you know the Charge 5 is about being a little extra. It’s still got a 27-watt lithium-ion battery, but that’s now pushing two 2-inch bass drivers (up from 1.9 inches) plus a new 20mm tweeter. At the ends of the rubberized cylinder are two passive bass radiators, which have traded the JBL logo for more exclamation points. I picked up on the vibe that JBL wants to say its Bluetooth waterproof speakers are exciting and it aligns with the speaker’s overall bold look, though the punctuation is a little too flashy for my taste.

Under the logo is an LED light bar that displays battery supply: at full power, it will be completely lit up and will then drain over time, flashing red when the battery is almost dead. The back has a USB-C port (the increasingly familiar oval) for recharging the battery—a charging cable is included in the box though you’ll need to provide the power block. Under a neighboring rubber flap, there is a USB-A port (the older rectangular type) that you can use to charge other devices. This “Powerbank” feature came in handy when I needed to charge my phone during a small, outdoor party.

With the outdoors specifically in mind, the Charge 5’s invisible but equally impactful upgrade is a new IP67 ruggedness rating, which means it’s not only protected from SOLO-cup spills like its portable predecessors, but it won’t suffer from contact with sand or other small, solid particles. Although I am unfortunately landlocked, I can confirm its ability to withstand a few dunks in my bathtub, as well as dirt and debris from various park picnics. The Bluetooth waterproof speaker claims the ability to survive for 30 minutes submerged in 1.5 meters of water, but I didn’t press my luck. If you frequently bring your speaker outdoors (or stuff it in a sand-filled backpack from time to time), the additional dust proofing can make a world of difference when it comes to its longevity.

Roughly the size of a water bottle, I found that the JBL Charge feels sturdy, strong, and easy to grip; you can pick it up from any angle without fearing it will slip. In fact, I tossed it over to some friends more than a few times without worrying about any damage. The rubber traction strips, which replace a flat base on the Charge 4, and caps on either end of the speaker are sleek and smooth, nodding to its water-friendly design.

Setting up the JBL Charge 5

Setting up the JBL Charge is simple and straightforward. At the top of the speaker are six buttons for volume control, play/pause (which can be pushed twice to skip), power, PartyBoost, and Bluetooth. The Charge 5 uses Bluetooth 5.1 (SBC, no fancy higher-resolution audiophile codecs like aptX) to connect with devices up to 800 feet away and transfer data at two megabits per second. That’s an upgrade from the Charge 4’s Bluetooth 4.2 connection in terms of signal strength and reliability. Of course, you can only reap the benefits of this improved connection if your device is also equipped with Bluetooth 5.

All you need to do to pair is hold the Bluetooth button until an LED blinks and then look for the speaker on your device. I had no issue linking my iPhone or computer in both outdoor and indoor settings. Even when walking a few yards away or into another room separated by a thick wall, I never found the music to experience any glitches or pauses.

The Charge 5 has notably sacrificed the traditional 3.5mm auxiliary connection, which might be bothersome if you’re used to plugging a source directly into a speaker, but this shouldn’t be a problem with most smartphones now foregoing the headphone jack for wireless. You can also connect up to two devices at once, so you can easily take turns controlling the tunes at your next gathering. You’ll be able to avoid any inevitable, mood-killing awkwardness that comes with stopping a bop just to disconnect or reconnect a different phone.

Available in six colors—red, grey, black, navy, camo, and teal—the JBL Charge 5 makes itself known visually. Though, unlike the Charge 4, you can’t currently purchase the Charge 5 with custom designs and details. If you’re looking for an inconspicuous, minimalistic design, the Charge 5 may not be the one for you. But even if it’s not in your line of sight, you’ll notice it sonically.

Overall, the Charge 5 delivers a well-balanced, expansive mix. The additional tweeter provides enhanced clarity for mid-high to high frequencies, and the passive radiators provide a surprisingly powerful, thumping bass. Pushing 30 watts to the woofers and 10 to the tweeter, the Charge 5 outputs a 65 Hz- 20k response. However, the speaker does have trouble accurately expressing the lowest of the deepest sub-bass—par for the course with even the best portable speakers, party-oriented ones included. On songs like Tash Sultana’s “Big Smoke Pt. 1” or PJ Harvey’s “Down By the Water,” the guitar licks are expressive, perfectly situated in the mix, the vocals are full, and the bass comes through nicely. You’ll miss out on some of the emotionality and nuance of low end-powered songs like “Limit to Your Love” by James Blake or much of Massive Attack’s discography, which can come out sounding slightly muddy in the speaker’s attempt to overcompensate for the lack of a large sub driver. That being said, for a small, lightweight speaker, the Charge 5 has an impressive sound profile that’s both bassy and bright, with enough support across the spectrum to keep you happy.

The Charge 5 is impressively loud, but if I pushed it far enough the audio quality could degrade. The speaker itself doesn’t give you any indication of volume in decibels or how close you are to reaching its limit, and digital signal processing does a good job of keeping things in check, but the distortion was present if I went too far above 85dB, which is a perfectly appropriate volume for most settings. If you’re hosting a giant party, you might want to invest in something that can handle a little more, but overall you’ll get your money’s worth when it comes to volume.

The JBL Charge 5 life of the party

Compared to the JBL Flip 5, its beer can-sized $120 contemporary that can go about 12 hours on a full battery, the Charge 5 has a much longer life, playing music for up to 20 hours on a four-hour charge. While you might not get a total of 20 hours if you blast it at full volume, I got a solid 17 hours of music and podcast listening in over three days with a bit of charge left to spare. So, what you trade in size you make up for in not needing to find an outlet. And, aside from a bike or backpacking trip where every square inch of space is essential, you probably won’t bemoan the amount of space it takes up, especially if you want to get off the grid without sacrificing the groove.

If you want to maximize your sound, you can push the PartyBoost button (in the form of an infinity sign) to create an array of up to 100 connected JBL speakers. However, previous models that used the JBL Connect or Connect+ protocol to link other speakers are not compatible with the PartyBoost-equipped models. The trade-off is that this new way of connecting is stronger and more reliable. PartyBoost is also the only way to listen to a stereo mix of your favorite songs. Without using this feature to connect two JBL speakers (they don’t have to be the same size/model, just similarly recent generations), you’ll have to listen to a mono mix. While this might disappoint some audiophiles, it’s fairly standard practice for a portable speaker. While I haven’t had the opportunity to test out the maximum power of multiples via PartyBoost, pairing with a friend’s JBL Flip 5 took less than a minute and I appreciated the opportunity for aural improvement. The soothing stereo sound was the perfect way to relax in her backyard after a long day.

You can manage the PartyBoost connection using the JBL Portable app. There is also where you can monitor battery level and upgrade the speaker’s firmware. Other than those features, the app doesn’t offer much; unlike other Bluetooth waterproof speakers like the UE Megaboom, you can’t use the app to make any audio adjustments, cycle through different presets, or adjust the EQ; with the JBL Charge, what you hear is what you get. The Portable app was fairly inconsequential to my user experience, and I was already pleased with the built-in sound quality, so I didn’t mind the lack of features. I like to save the super-fancy stuff for my at-home setup and focus on the IP rating and actual portability for any outdoor use, both areas in which the Charge 5 excels.

So, who should buy the JBL Charge 5?

The Charge 5 has all the things you want in the best portable Bluetooth speaker. It can easily handle a jaunt to the beach, camping trips, pool parties, river tubing, and so much more. If you’re going to spend most of your time listening inside, there’s a model out there with a more refined sound profile, like this set of Bluetooth shelf speakers from Edifier. And the Charge 5 doesn’t include features like auxiliary inputs or Siri/Google Assistant voice input found in a more expensive model, like the $350 JBL Extreme 3 or $299 Bose SoundLink Revolve+ II, respectively. But it’s an impressive, compact way to take your music with you without any worries, a hallmark of JBL Bluetooth speakers. If you’re looking for a lightweight, long-lasting, outdoor speaker with a straightforward setup, enhanced survivability, and a sound as bold as its looks, the JBL Charge 5 won’t disappoint. Cheers to great-sounding tunes on a superb summer evening outdoors.

Carsen is a sound designer and freelance writer focusing on music and technology. She has been writing for Popular Science since early 2020, contributing product reviews and recommendations, with an emphasis on great sound you can take with you on the go. She lives in Brooklyn amongst a growing vinyl collection, exactly three plants, and a fridge full of popsicles.