The Toniebox is a kids’ music player with a lot of character—and characters. 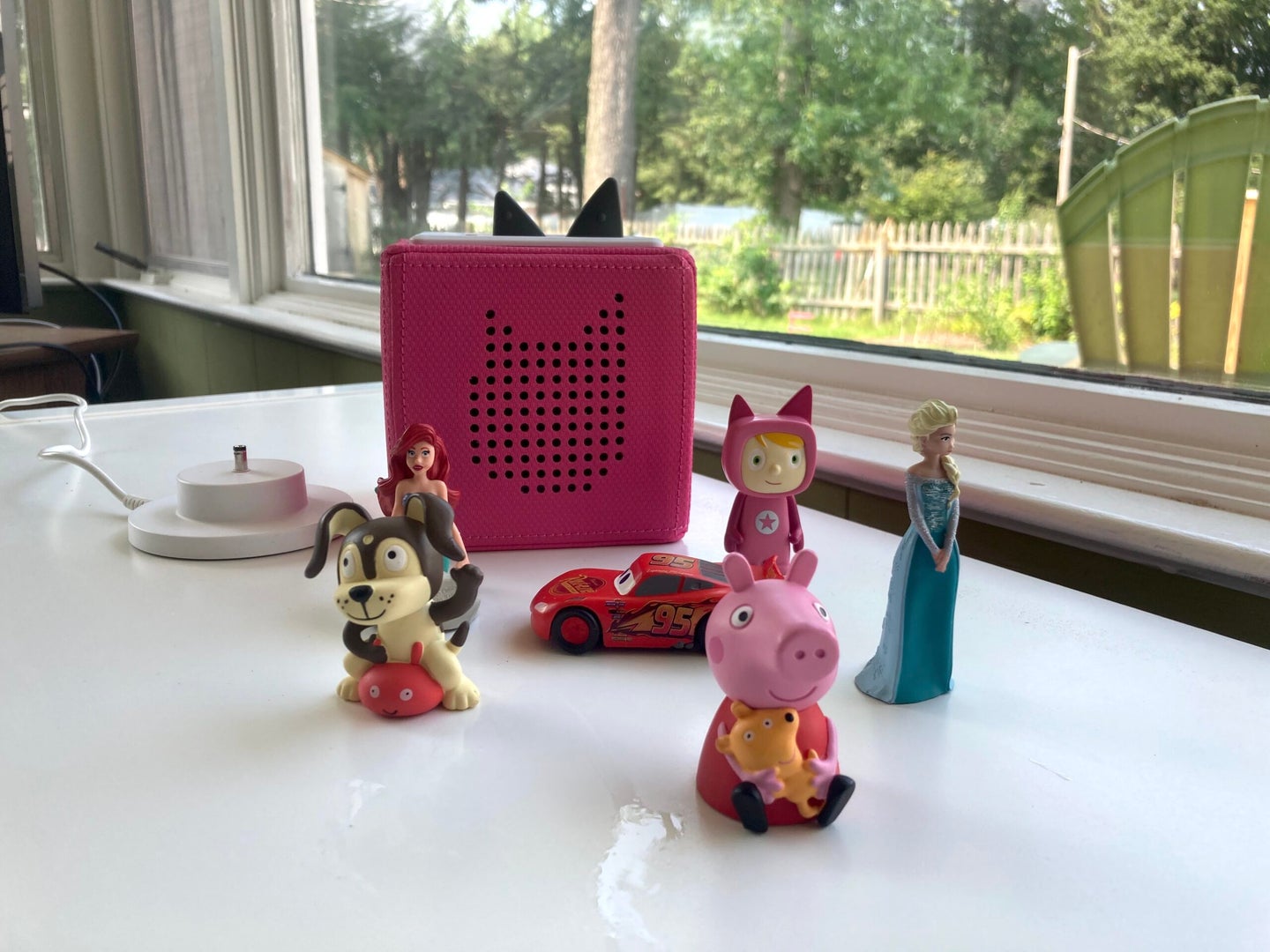 My greatest moment with the Toniebox audio player happened when I wasn’t even listening to it. Part of the testing occurred during a beach week with my brother’s family, and one evening I went to grab a beverage in our rental house where I saw my 3.5-year-old daughter, 6-year-old nephew, and 7-year-old niece huddled on the floor thoroughly engaged around the Toniebox. As any parent knows, screen-free entertainment can be challenging to sustain. And screen-free entertainment that works for a range of ages is nearly impossible. But, at that moment at least, the Toniebox had pulled off the miraculous.

Of course, the Toniebox is by no means a perfect product when put under an adult’s critical eye (and ear). Its sound quality is somewhat tinny, and the whimsical Tonie figurines that are key to all of the content are bound to get lost, or stepped on. Still, my 3-year-old carried her music box around all week, subbing out the Elsa Tonie for the Lightning McQueen Tonie at a rate that definitely frustrated her older, much more patient cousins. My daughter even cried when we told her she couldn’t bring the music player to the actual beach. When we eventually got back home and hung out with friends in the neighborhood, she proudly presented her Toniebox and declared it one of her best toys ever.

What is the Toniebox?

Created in 2014 by fathers Patric Faßbender and Marcus Stahl, the Toniebox is a purposefully simplistic portable speaker and storyteller that debuted internationally in 2016 before arriving in the U.S. in 2020. Considering that the Toniebox is enriching, educational, entertaining, and engrossing—all without any incessant, disruptive blinking or blue light—it’s no surprise that it was developed by parents.

The 4.7- x 4.7- x 4.7-inch cube is slightly larger than the oversized fuzzy dice you’ve seen hanging from rearview mirrors, and the colorful padded fabric makes the speaker feel nearly as soft. Yet this music player for kids is shockproof, water-resistant, and incredibly durable—ours suffered no ill effects even after multiple drops by my daughter.

Once it’s set up, the Toniebox is easy to use. Instead of relying on outdated discs or a Bluetooth-connected phone to feed it content, the music and stories are downloaded by placing hand-painted Tonies characters atop the box. Those characters put content directly into the box, letting you listen wirelessly—perfect for car trips. Also good for car trips, the Toniebox features a standard 3.5mm audio jack for headphones or earbuds. But those earphones can’t be wireless—the box offers no Bluetooth connection.

The $99.99 starter kit we received [now discontinued and replaced by a Playtime Puppie Tonie set] includes a Creative-Tonie but no preloaded content Tonie—I’ll get into the differences below. Our Toniebox was pink, but you can select from a spectrum of six choices, including fire engine red, sky blue, grass green, purple, and gray.

Setting up the Toniebox

Using the Toniebox is so easy even a 3-year-old can do it. I saw proof. Setting it up, however, requires an adult—or at least someone who knows how to connect a device to WiFi. Begin by downloading the MyTonies app to your Android or iOS smart device. You’ll have to create a free profile for your Toniebox on the app. Then hold both triangular “ears” on the box for 5 seconds until the LED lights on top of the music player flash. The lights will blink for about 20 seconds. When you hear a chime, press “continue” on the app. Select your wireless network, type in your password, and you’re ready to let your preschooler play deejay. Note that the Toniebox is best set up within close proximity to your router. My initial attempt from the other side of the beach house failed, setting off a temporary tantrum from my daughter.

The Tonie characters attach magnetically to the top of the box, which they speak to through a near-field communication chip. Once in place, they begin playing immediately. Adjust the volume by pressing the ears and change tracks by slapping the box on its left or right side. Don’t be afraid to hit it hard! In fact, you need a pretty solid strike to change chapters. To fast forward or rewind within tracks, simply tilt the box left or right. If you want to listen to something completely different, swap out the Tonie on top. Once you put a new figure on top, the Tonie will always start at the beginning of its preloaded content. The temptation to swap these characters out repeatedly is real. In fact, it was several days into our testing before we actually played any Tonies all the way through their content.

Key features of the Toniebox

Don’t expect the Toniebox to replace a wireless speaker. For one thing, it doesn’t have Bluetooth connectivity, so your content is limited to what’s available directly from Toniebox. And while the audio is perfectly clear—and is especially fine if you and the kids are belting the lyrics to “Part of Your World” on top of the music—it can come across a touch soft, even with the volume turned all the way up. It’s got a rated power listing of 3W/5W, frequency range of 180 to 15 kHz, and average sound pressure of 80 dB. What this means is the Toniebox will never achieve piercing, potentially harmful levels. It also means audiophiles-in-training won’t crow about the sound quality. But seeing how kids don’t repeatedly ask to hear that story about how much treble a speaker has, there’s just a lot to like about the Toniebox. Here are some of the key features.

The Disney princesses and cartoon figurines that go on top of the Toniebox are what give the kids’ music player its character. The hand-painted Tonies come preloaded with anywhere from 15 minutes to roughly an hour of content, offering a mix of songs, stories, and games. We loved singing “Let it Go” with Elsa and listening as Peppa Pig’s family went skiing—though when the three kids were listening at once, arguments about which Tonie should go on top next inevitably ensued. That made for great lessons in sharing on top of the lessons of self-confidence and problem-solving the songs and stories imparted.

Toniebox currently partners with Disney, Pixar, Universal Music Group, Scholastic, and Macmillan Children’s Books to offer characters and content that kids will find familiar. More than 30 Tonies—from Winnie the Pooh to Woody to Stick Man—sell individually for $14.99 (about what I used to pay for DVDs, and I wasn’t always as passionate about them as the kids and their stories). Losing the Tonies, however, is a bigger risk. Unlike a mundane CD or Blu-ray disc that at worst gets pushed to the back of a shelf, the Tonies are practically begging to be played with. My 3.5-year-old pushed Lightning McQueen around as if he were a Hotwheels car—and Hotwheels cars seem to always find their way under the couch. And misplacing Tonies is an issue because without them the content goes away.

Each Toniebox also comes with a Creative-Tonie that allows you to record 90 minutes of content. When you’re done recording via the app or a computer, hold down one of the Toniebox’s ears for 3 seconds to sync the file. Moments later, you can hear yourself singing in the same way you had just been listening to Ariel or Aladdin. We recorded a little “Happy Birthday” and also made up a story about a turtle who didn’t know how to swim.

When storytime and playtime are done, you can use the Sleepy Time Tonies to play calming music for kids, white noise, or nature sounds for nap time.

Rolls with the punches

Designed in Germany and made in China, the shockproof speaker seems nearly indestructible. The textured fabric is stitched around squishy foam that makes this portable music player feel closer to one of your kids’ cool toys. I rolled the music player across the wooden floor, dropped it while standing, and let it tumble down the slide. Still, the beat went on. I even drew on it with a felt tip pen and easily washed the mark off with a flick of my finger and a quick wipe.

The Toniebox comes with a wall charger that allows the music player to easily nest on top. Toniebox bills up to 7 hours of playtime, but we got an orange LED light—signaling low battery power—a few hours in. Granted, we had the music player on full blast and switched Tonies probably more than advisable. On the charger, the Toniebox is back to full power in about 3 hours.

So, who should buy the Toniebox?

In this age of excessive screens, somehow audio content is on the rise. Podcasts are attracting more advertising dollars, and smartphones have given new life to audiobooks. Perhaps it’s proof that nothing quite replaces the timeless storytelling and singing that originated around prehistoric campfires. The Toniebox delivers some of that timeless entertainment in a fun and engaging way thanks to its colorful fabric and hand-painted characters. That’s why parents who are looking to keep their preschool- through elementary school-aged kids engaged without relying on screens should consider buying the Toniebox.

The colorful Tonies that go on top are enough to encourage kids to want to use the music player and the loaded content that comes with those characters—most of whom your kids will already know—is enough to keep them coming back. You can look forward to answering the question, “Is there such a thing as too many ‘Let it Go’ or ‘Under the Sea’ singalongs?”

Parents with older kids may consider the $99 Yoto Player, which features content cards instead of characters and has additional publishing house partnerships, meaning it offers more mature titles like “The Secret Garden.” And parents who want even more stories upfront may consider the Lunii My Fabulous Storyteller, which includes 48 built-in adventures with more available for download—though most stories are lesser-known. Meanwhile, parents who would rather their child be able to listen to anything that can play on a smartphone can forgo dedicated music players for a Bluetooth speaker. The waterproof and dustproof UE Wonderboom 3 may be a good option for kids.
But if you’re seeking a screen-free storytelling machine that the kids will actually play with, the Toniebox audio player may be the best portable music player for kids. These cool toys will have them singing and have you singing its praises.