McIntosh still builds its amps by hand, one piece at a time. 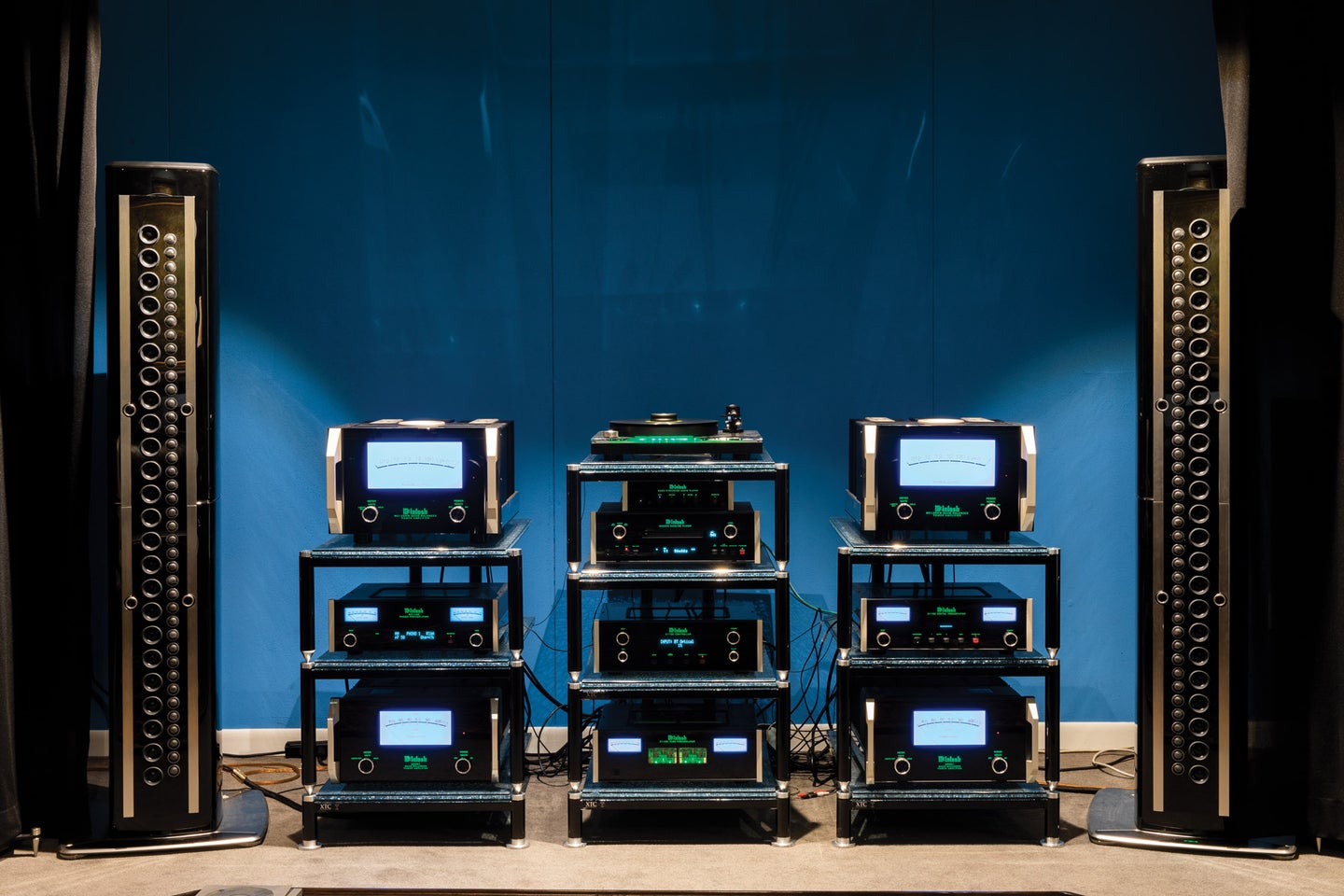 Frank McIntosh and Gordon Gow launched their home stereo company in 1949, one year after the invention of the long-​playing record. Vinyl introduced consumers to high-fidelity sound and created a demand for audiophile equipment previously reserved for broadcasters. McIntosh has since earned a reputation for quality components built largely by hand at its factory in upstate New York. Although speakers, turntables, and music streamers all roll down the assembly conveyors, audio aficionados most revere the warm sound of the company’s amplifiers. Some models rank among the finest ever created for home use. Others powered the audio stacks at somewhat larger venues, like Woodstock and Grateful Dead concerts.

The human touch is crucial to everything McIntosh builds. An automated water jet cuts the glass faceplates used on its amplifiers and other gear, but the precise work of finishing the edges and applying the filters that give the panes a soft blue tint requires the practiced expertise of a skilled technician. Many of them have worked there for decades; even company president Charlie Randall started as an intern while earning his engineering degree more than 30 years ago.

Amplifiers boost the puny electrical output produced by, say, a turntable so it can move the massive magnets that allow loudspeakers to produce music. Every step in the process creates opportunities for distortion. Transformers—coils that adjust that voltage to keep it from frying your equipment—in particular can muck up your listening experience. McIntosh winds its own rather than using off-the-shelf parts, tailoring each one to suit the needs of a particular piece of equipment so it delivers optimal sound.

Each transformer sits in a powder-coated aluminum case, fabricated along with dozens of other parts in the company’s metal shop. Most manufacturers mount the components directly to the amplifier chassis, but McIntosh’s old-school approach calls for encasing it in tar dispensed out of a machine at a blistering 450 degrees. The viscous goo shields the component from electrical interference and eliminates fidelity-robbing vibrations so nothing comes between you and sonic bliss.

McIntosh takes the unusual step of manufacturing its own printed circuit boards rather than relying on mass-produced pieces. Expensive, yes, but the company says it ensures quality. Although machines tackle the assembly of tiny pieces, human technicians meticulously add larger items like transistors, resistors, and the like following color-coded diagrams that map their precise placement. Particularly complex equipment like home-theater processors may contain as many as 11,000 parts.

Designers refine current products and create new ones across the parking lot from the factory, in an R&D lab that used to be a bowling alley. It houses a sound-killing anechoic chamber so quiet that you can hear your lungs fill with air. Technicians use the room to test the efficiency of loudspeakers and measure the performance of other hardware, like amplifiers. Fiberglass wedges jut out from every surface—even the floor—to prevent waves from reverberating and muddying the test results.

Any piece of gear emits tiny amounts of radio-frequency radiation, which can interfere with wireless signals and other electronics. International safety standards regulate RF emissions, so McIntosh uses this powerful antenna to make sure everything it builds follows the rules before sending it out for the independent testing required by law. Adding shielding or insulation as needed ensures that music is the only thing emanating from your sound system.

Engineers rely on an array of equipment to ensure quality, but nothing beats their time-tuned ears. This setup features four amplifiers and some of McIntosh’s finest kit, including line-array speakers that stand 7 feet tall, sport 162 drivers, and cost $130,000 a pair. They provide amazing fidelity no matter where you sit. If you’re ever lucky enough to get a backstage tour of the Binghamton mothership, though, sit front and center. That’s where you’ll get the best sound that this American audio institution has to offer.