SolarCity Announces Most Efficient Panels On The Market

And they'll be made in America 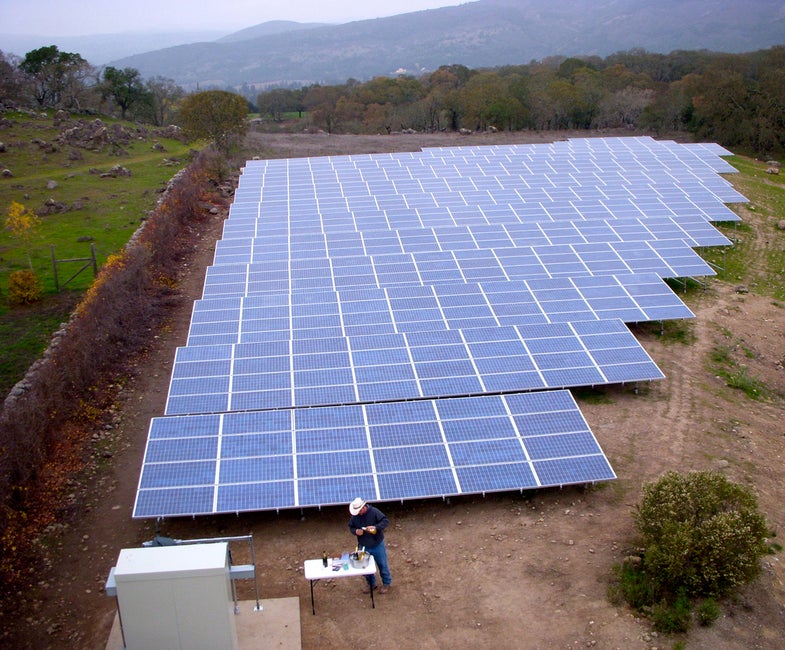 Solar panel company SolarCity today announced what it calls the “most efficient rooftop solar panels”. The company claims it “generates more power per square foot and harvests more energy over a year than any other rooftop panel in production, and will be the highest volume solar panel manufactured in the Western Hemisphere.”

While there have certainly been solar cells that have achieved a higher efficiency than the 22.5 percent SolarCity offers, the highest-efficiency solar cells, and the panels that incorporate them are not used in residential or commercial applications because they’re far too expensive.

SolarCity acquired Silevo, another solar technology company, last year, and are using the solar cell architecture developed there. They continued to work on the solar cell to bring it to an efficiency of 22.5 percent.

“Think of the solar cell as the engine that powers the solar panel,” says Ben Heng, senior vice president for product engineering at SolarCity. “There was a couple of people at a conference last year that said, ‘Ben, you know you have the engine of a Tesla, but how come you put it in a China-made car?’ So with that comment, this past year, we’ve been working on the correct so-called “car” or packaging and came up with this new [panel] design.”

The new panel configuration allows a cell-to-panel conversion efficiency loss of just 0.5 percent, which Heng says is best in class. That means the cell’s 22.5 percent efficiency translates to a 22.04-percent efficient panel. He says their closest competitor has about 1.5 percent loss, and others range around 2.5 percent.

The modules will eventually will be produced in Buffalo, N.Y., where they expect to manufacture 9,000 to 10,000 solar panels per day.

While efficiency is important, the cost is also a significant part of this equation. As Green Tech Media reports, the new panels will have a per-watt cost of around 55 cents.

To reduce the cost of manufacturing, SolarCity was able to employ Silevo’s methods of reducing the steps it takes to produce the panels. “It allows us to manufacture a high efficiency technology at costs more comparable to standard efficiency manufacturing,” says Jonathan Bass, SolarCity’s VP of communication.

And SolarCity claims that panels will produce 30 to 40 percent more power than other standard solar panels of the same size, while performing better in high temperatures.