Solar Cells So Thin They Could Blow Away

Get ready for solar bubbles 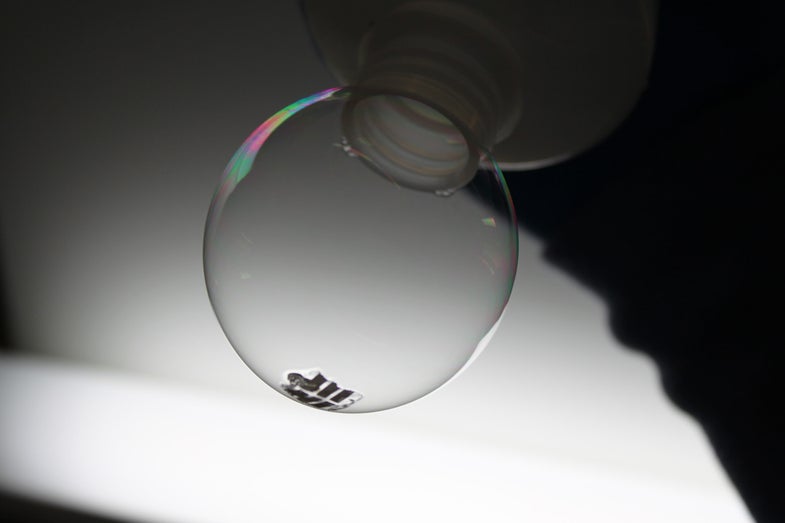 Researchers at the Massachusetts Institute of Technology have developed an exciting proof of concept of the thinnest, lightest solar cell ever made. The key to developing such a thin and light cell, according to MIT is a unique fabrication method.

Solar cells are typically made up of layers of photovoltaic materials and a substrate, such as glass or plastic. Instead of the usual method of fabricating each layer separately, and then depositing the layers onto the substrate, the MIT researchers made all three parts of their solar cell (the cell, the supportive substrate, and the protective coating) at the same time, a method that cuts down on performance-harming contaminants. In the demonstration, the substrate and coating are made from parylene, which is a flexible polymer, and the component that absorbs light was made from dibutyl phthalate (DBP). The researchers note that the solar cell could be made from a number of material combinations, including perovskite, and it could be added to a variety of surfaces such as fabric or paper.

And so, how thin is the thinnest solar cell, really? Well, it’s about 1/50th the thickness of a strand of hair. To demonstrate this extreme, the researchers placed the cell on a soap bubble (which you can see in the image above). But, thin and lightweight might not always be the best, as the one of the study authors, Joel Jean, said in an MIT news release, “if you breathe too hard, you might blow it away.”

This slight weight also means that its power-to-weight ratio is particularly high. The high ratio translates to getting more power without adding a lot of weight–useful for high-altitude balloons, for example. The solar cell demonstrated an efficiency output of about 6 watts per gram, which MIT says is about 400 times higher than silicon-based solar cells.

Now, the challenge is moving the experimental lab demonstration into the real world. As Vladimir Bulović said in a MIT news release, “how many miracles does it take to make it scalable? We think it’s a lot of hard work ahead, but likely no miracles needed.”