An All-Liquid Battery For Storing Solar And Wind Energy 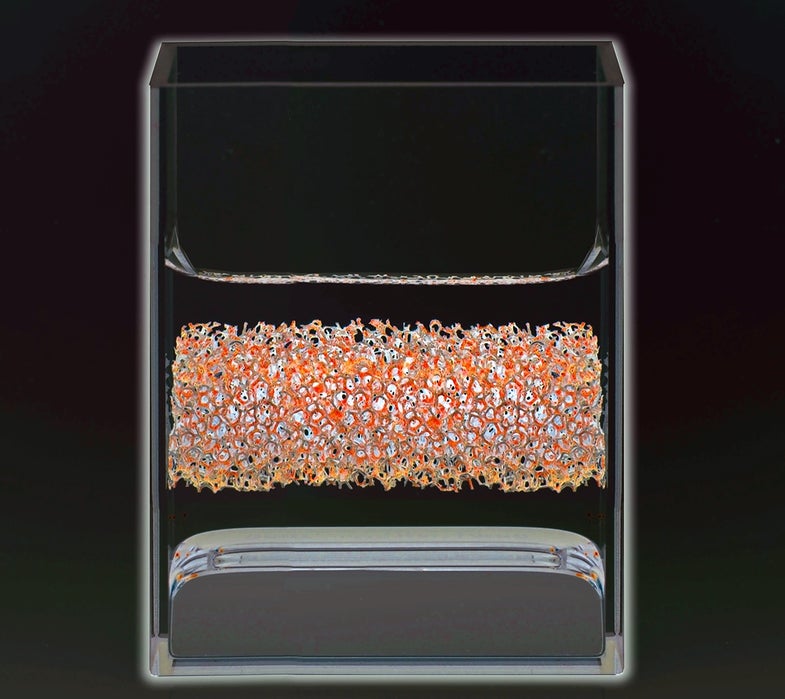 You could call it a rainy-day fund. A team of MIT researchers has built an all-liquid battery prototype that’s designed to store excess energy from solar and wind power plants. When the sun isn’t shining, or the wind isn’t blowing, future versions of this battery could release energy captured during more productive times into nations’ power grids.

Cheaper, more efficient energy storage would be a big boost for alternative energy technologies. It would help solar panels and wind turbines provide grids with steady electricity—instead of surges during sunny or windy times—so it’s always there in case of high demand. It also might make sun- and wind-produced electricity cheaper; by storing extra energy that isn’t being used, less electricity is wasted in the long run.

There are already solid batteries sold now to store energy from solar panels. They’re mostly used in single homes, however. As solar facilities get larger, solid batteries get more expensive and less efficient, compared to how much energy the whole facility makes. The MIT team thinks an all-liquid battery, filled with searingly hot, molten metals, might be a good alternative. Liquid batteries may be easier (and thus cheaper) to manufacture in larger sizes, and they’re expected to last longer than solid ones.

The battery is filled with searingly hot, molten metals.

The team previously made a prototype all-liquid battery filled with magnesium and an element called antimony. With this latest version, the team has made a battery with lithium and antimony mixed with lead. It has some advantages compared to its predecessor. Mixing the antimony with lead makes the materials cheaper. Plus, the battery can be kept at lower temperatures. It works at 450 degrees Celsius, versus 700 degrees Celsius.

The team even conducted a durability test, charging and discharging the liquid battery for 1,800 hours. From that data, it predicts that the battery would lose 15 percent of its capacity after 10 years of daily use.

Engineers have long known about how important storage is to solar and wind energy, given their unreliable natures. For example, evenings can be a high-demand time for electricity, but they’re not particularly sunny. Additionally, there can be an overproduction of solar energy during daylight hours, meaning valuable electricity goes to waste frequently. Research groups are working on a number of storage schemes to fix these issues, from flywheels to liquid nitrogen and oxygen.

The MIT team published its work yesterday in the journal Nature.