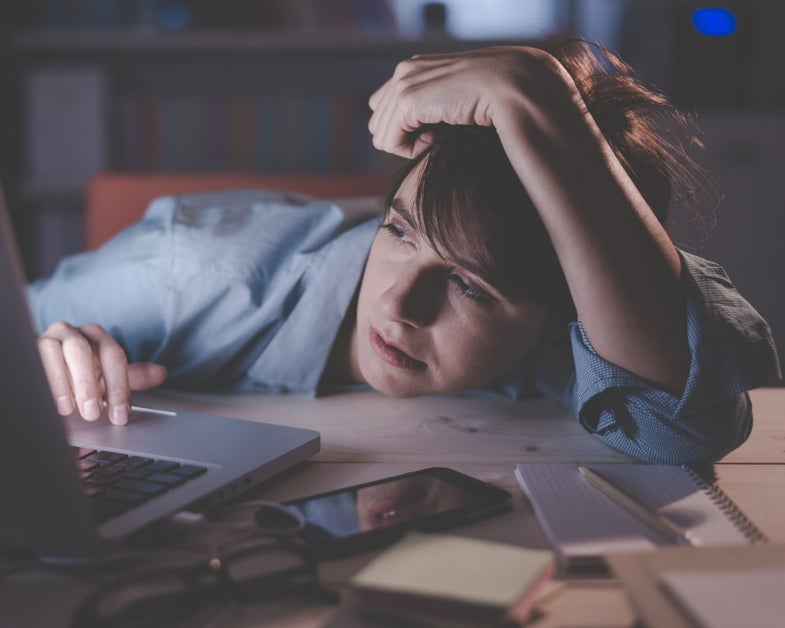 If you’ve ever found that a poor night’s sleep has left you feeling not only a bit groggy, but also on edge, you aren’t alone. People with insomnia have double the risk of developing an anxiety disorder, and 70 to 80 percent of people with clinical anxiety have trouble either falling or staying asleep. However, until now, how this relationship works in the brain was unknown.

New research presented at the annual Society for Neuroscience meeting in San Diego last month revealed that missing just one night of sleep results in a pattern of brain activity that looks a lot like anxiety.

“Sleep loss triggers the same brain mechanisms that make us sensitive to anxiety to begin with—regions that support emotional processing and also regions that support emotion regulation,” says Eti Ben-Simon, a postdoctoral fellow in the department of neuroscience at the University of California, Berkeley. “If we are chronically sleep deprived, if we keep losing sleep, it could sensitize us to greater anxiety levels and help develop an anxiety disorder.”

In the new study, the researchers had 18 healthy people come into their sleep lab for two nights: one of total sleep deprivation, followed by a normal restful night. The scientists measured the sleepers’ anxiety levels in the evening and in the morning after each session. When the participants were sleep deprived, their anxiety levels increased by 30 percent the next day, with half the participants reaching the threshold for a clinical anxiety disorder.

The researchers also probed what was happening in the brain after a night of sleep loss. They put the participants in an fMRI (functional magnetic resonance imaging) scanner the next morning and showed them distressing video clips, like of child or elderly abuse, to evoke an emotional reaction. Following the night of no sleep, there was significantly more activity in emotion-generating regions of the brain, such as the amygdala and the dorsal anterior cingulate cortex. Both of these areas process negative emotions like fear, and they are hyperactive in patients with anxiety disorders.

When in a sleep-deprived state, the participants also had less activity in the medial prefrontal cortex, a part of the brain that is directly connected to the amygdala and helps control negative emotions. For example, this area turns on when we try to calm ourselves down, and less activity there is associated with greater anxiety. The participants who had the most decline in activity in the region also had the biggest increase in anxiety, suggesting that emotional control is especially important in the link between sleep loss and anxiety.

“When we are well rested, regions that help us regulate emotions are the ones that help keep us less anxious and keep us calm, and those regions are very sensitive to sleep loss,” says Ben-Simon, who led the research. “Once we are losing a certain amount of sleep or a whole night of sleep, these regions are basically going offline and we’re not able to trigger those processes of emotion regulation.”

The good news is that after the participants got a full night of sleep, their anxiety levels went back to normal. But it wasn’t only the quantity of sleep that mattered, it was also the quality.

There are two main stages of sleep: REM (rapid eye movement) when we’re dreaming and nonREM, which is typically a deeper and more restful sleep. An EEG (electroencephalography) helps scientists figure out which sleep stage people are in. After the recovery night of restful sleep, participants who spent more time in deep nonREM sleep were less anxious the next morning and showed more activity in the medial prefrontal cortex.

“We think that during deep sleep, some of these emotion regulation mechanisms that are so susceptible to sleep loss are actually being restored, and that allows us to start our day with lower anxiety in the morning,” explains Ben-Simon.

The overlap between anxiety and insomnia is not new. However, the discovery of how one causes the other and the connection between the two conditions in the brain is. “What [this] work does is to show that this is a two-way interaction. The sleep loss makes the anxiety worse, which in turn makes it harder to sleep,” Clifford Saper, a professor of neurology and neuroscience at Harvard Medical School who was not involved in the research, wrote in an email. “For many people this is clearly a vicious cycle.”

Deep sleep is particularly impaired in anxiety disorders, leading the researchers to conclude that enhancing this sleep stage could help treat anxiety. In fact, one way anti-anxiety medications may work is by improving nonREM sleep. However, some sleep medications, such as benzodiazepines, don’t actually increase the time spent in this stage. Saper says that because of this, cognitive behavioral therapy (CBT), which attempts to break the sleep–anxiety cycle, has emerged as the best treatment option available.

So, remember to always make sleep a priority, because it’s far more beneficial in the long run than anything “productive” you do at 3am.