The relationship between fidgeting and attention is complicated, but you can make the most of it with some strategies. 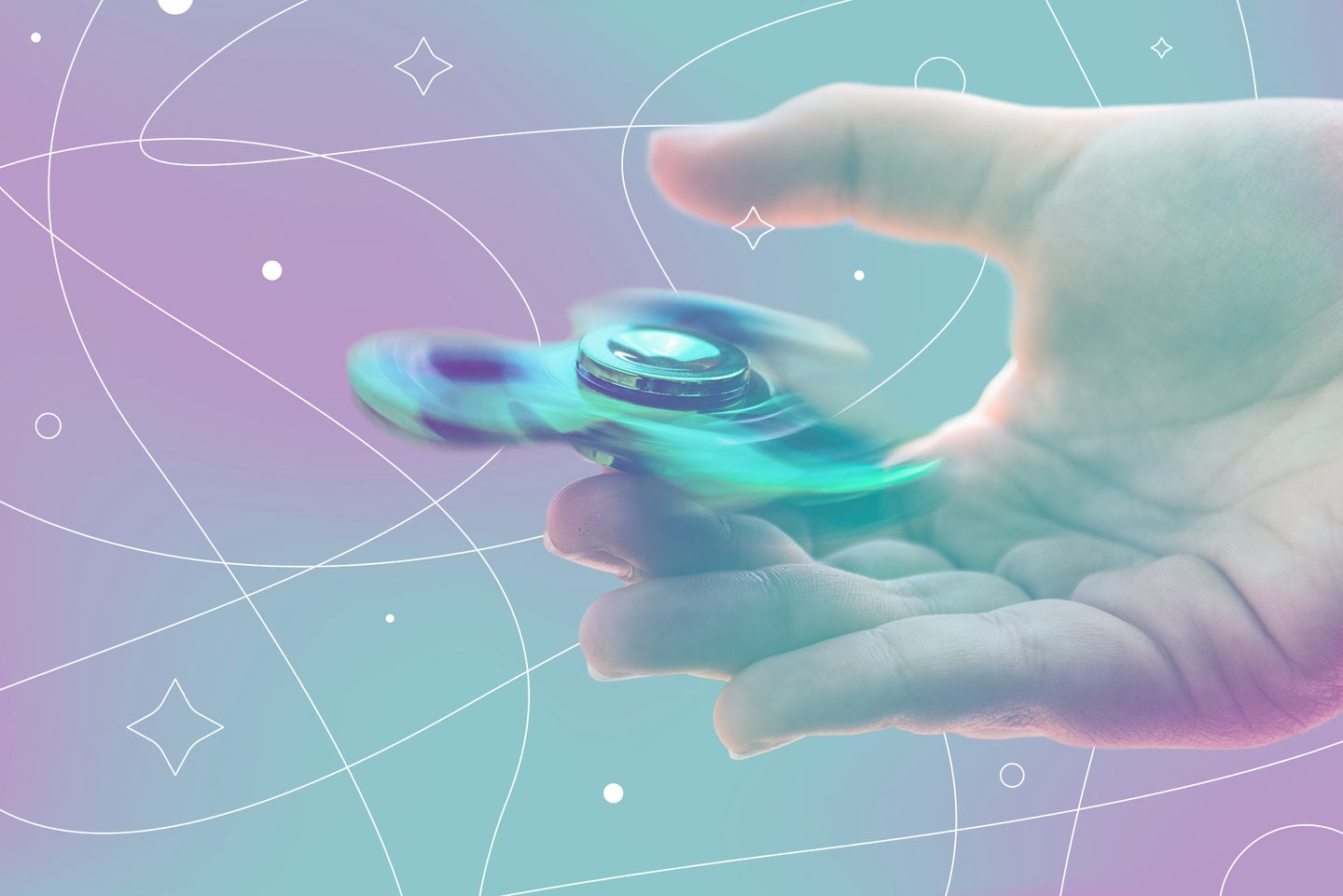 Fidget spinners may have died off as a cultural phenomenon, but they could still be useful for some people. David Bartus via Pexels
SHARE

For a brief time in 2017, fidget spinners were inescapable. They lined the shelves of department stores and gas stations, and teachers struggled to manage the sudden influx of twirling plastic devices in classrooms.

But fidgeting didn’t start with the spinner.

Whether it’s flicking a pen, tapping our legs, or fiddling with our hair, fidgeting has long been a standard piece of the human behavioral puzzle. While the science on exactly why we fidget isn’t completely settled, research has already provided us with some strategies we can employ to help make it more productive for our cognitive processes—and less distracting for the people around us.

Why do we fidget?

While there’s no concrete answer as to why some people feel especially compelled to fidget, prevailing theories often link it to attention. “Fidgeting often comes into play under circumstances where things are too challenging or easy.” says Julie Schweitzer, a professor of psychiatry and behavioral sciences at UC Davis and researcher at the MIND Institute. “There’s this homeostasis when people are engaged and they’re not tired, and whatever they’re paying attention at the time is not too demanding or too boring, they probably don’t need to be fidgeting.”

When things are too simple, the act of fidgeting can help to engage and stimulate areas of the brain to help maintain attention. During anxious or high-pressure moments, those movements serve to relieve some of the stress from the system. These displacement behaviors, such as picking at fingers or rubbing skin, which typically fall under the umbrella of “fidgeting,” provide more stress relief effect for men than for women in high-pressure situations.

Because excessive fidgeting is associated with attention deficit hyperactivity disorder (ADHD), research around the phenomenon often focuses on people with that diagnosis. But there are some commonalities that remain relevant in a wider context. “The motor areas of the brain and the sensory motor regions of the brain tend to be altered in people with ADHD,” says Schweitzer. “Certain neurotransmitters like norepinephrine and dopamine are related to those regions. so I suspect there’s a physiological and neuroanatomical reason for this that interacts with the environment.”

There are some theories about fidgeting that have little to do with attention. Research suggests the practice is an automatic response in the body’s efforts to manage weight and burn off excess calories. In that case, fidgeting is part of a suite of behaviors known as nonexercise activity thermogenesis (NEAT), which also includes maintaining posture and other activities involved with going about our daily lives. While flicking a fidget spinner around isn’t going to provide enough exercise to melt away the fat over the abs, the collective effect of moving around all day can be significant when it comes to calorie consumption.

How can you fidget effectively?

Schweitzer and her team are currently developing a study to get a better understanding of how people fidget. In time, they hope to determine how we can hone those behaviors to be less distracting and more effective when it comes to reducing stress and increasing attention. The formal study will involve a computerized fidget ball and carefully coded video observation of the participants.

For now, Schweitzer and her colleagues suggest that some simple self-assessment can help. “Time yourself while performing a specific activity to see how long it takes while tracking your accuracy,” she says. “Then try again while using your favorite fidget device.” It won’t provide scientifically significant results, but it may give you an overall idea of whether or not that spinner is helping or hurting your ability to perform tasks and pay attention.

Kimberly Patterson, an occupational therapist with New York’s Capital District Boards of Cooperative Educational Services, has similar tips. Individuals have to do their own experimenting to determine which behaviors help or hurt them. “You have to go by trial and error to find out what works,” she says. While she largely works with autistic individuals, some of the same techniques prove widely beneficial.

The occupational therapy devices Patterson works with go well beyond fidget spinners, but many remain fairly simple. “We have these things called Therabands that we put on the bottom of the legs of a desk, so when a student is sitting there, they can push their foot on it,” she says.” Depending on the thickness of the band, they can get more or less resistance.” She also extols the virtue of the simple squishy ball, or a piece of putty that provides resistance when squeezed. Other tools include simple loops and blankets made of stretchy Lycra, which are quiet and provide sensory stimulation as well as a means for simple fidgeting.

Just because something is marketed as a “fidget toy” or “stress relief device” doesn’t mean it will actually do anything for you specifically. Trial and error is important in the process. Sometimes you may even find that your go-to fidget behavior isn’t helping the way it usually does. “If you’re sick, if you didn’t get enough sleep, that can affect the outcome and the effectiveness of building the sensory input in your system,” says Patterson.

Despite the complicated relationship between fidgeting and paying attention, some research still shows that people perceive these movements as indicators of distraction. It’s important to realize that fidgeting isn’t always a behavior that needs correcting. “If you’re running around the classroom, that’s a problem,” says Schweitzer. “But, there are people who just move a lot. If it doesn’t interfere with anyone else, let them do it.”

Fidgeters can also do their part in keeping their own behaviors from negatively impacting others. Choosing a fidget device that doesn’t have moving pieces, that doesn’t make sound, and that’s easy to hold onto (so you won’t drop it) can lower the chance of these behaviors distracting those around you. Patterson even suggests trying out hand-strengthening exercises when you need to focus; these provide stimulation while also lessening the likelihood that you’ll drop whatever it is you’re fidgeting with.

If you find you have particularly distracting fidgeting behaviors, you may be able to shape them into something more acceptable for your typical environment. For instance, if you tend to bounce your knee up and down by tensing your calf muscle, choose a seat away from other people who may find the resulting vibrations hard to ignore.

“Years ago, I had a patient who was a very bright medical student,” Schweitzer says. In his classes, they had the chairs that were all connected. He used to move his leg a lot during lectures, and it really bothered everybody. They all moved so he had the whole row to himself. It worked out for everyone.”