Meditation isn’t always calming. For a select few, it may lead to psychosis.

Meditation has a very real effect on the brain—and for some people, there are side effects involved. 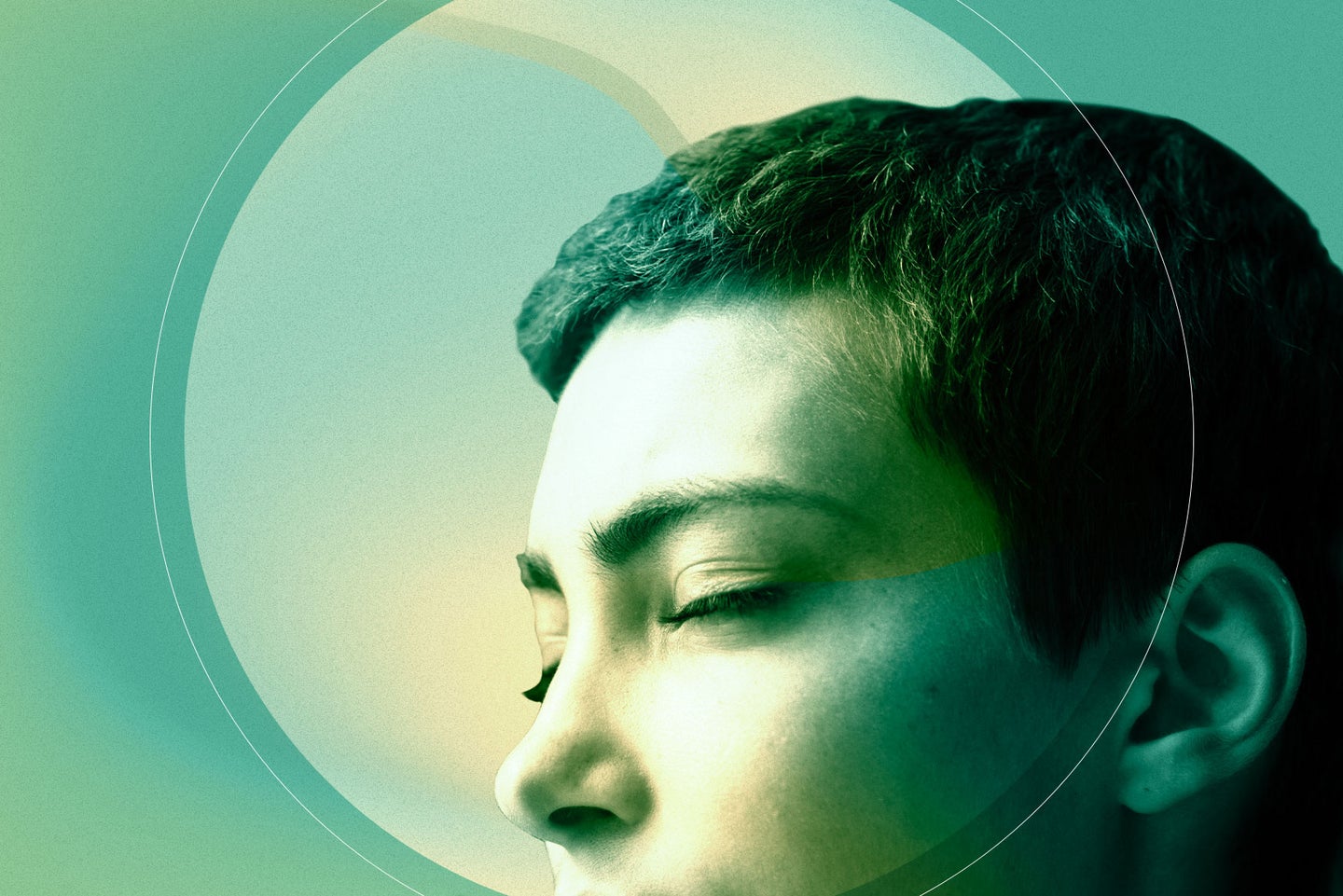 There’s still a lot researchers don’t know about the connection between psychosis and meditation.
SHARE

In 2006, at the age of 20, a junior at Indiana University Bloomington’s prestigious conservatory could barely pick up her viola. The student, who requested to remain anonymous, felt her life had become unmanageable.

Every time she tried to play, waves of depression came on. Desperate to continue her studies, she turned to meditation. Occasional classes with her mom quickly turned into a routine regimen: 30 minutes of morning meditation, the same at night, as well as weekly group sessions and retreats at nearby ashrams. A year into her practice, her depression had melted away, she had friends, and she could play her viola again.

That was where her healing stopped—and where one of the darkest periods of her life began.

Like the violoist, millions of people have turned to meditation for their mental and physical wellbeing. Between 2012 and 2017, the percentage of U.S. adults who meditated in a given year more than tripled, from 4.1 percent to 14.2 percent, according to the National Institutes of Health (NIH). And many people benefit from the practice. Research suggests that regular meditation reduces blood pressure, symptoms of irritable bowel syndrome, anxiety and depression, and insomnia.

But meditation isn’t always beneficial or even benign. A year after the student musician began meditating, she attended a group meditation in India along with 50,000 other people and their guru. When she returned, her perspectives had shifted in a surprisingly drastic way: Colors seemed brighter and inanimate objects suddenly held subliminal messages, energies, even personalities. She began to believe she had absorbed the power of her guru. Energy pulsed from the base of her spine to the crown of her head. It radiated through her limbs and into her viola. Each time she meditated, the feeling grew more intense. “I was losing touch with reality,” she says. “Messages were coming from everywhere in a barrage. It was terrifying.”

While home for the holidays in New York City, she refused to wear a coat in frigid weather, convinced she was immune to the cold. It was in a pizza restaurant, dressed in a single thin layer, sobbing, that an emergency medical technician approached her. Later that evening, at a psychiatric hospital, the young woman received her diagnosis: schizoaffective disorder, a type of schizophrenia.

The violist wouldn’t be the first person to experience a psychiatric emergency after meditating. Dozens of similar cases have been documented in the medical literature going all the way back to 1915. On the subreddit r/meditation, users describe how they suddenly stopped sleeping after meditation retreats, developed a sense of impending doom, or felt as though they were “traveling through different timelines.”

To be clear, the majority of people who practice meditation won’t go on to develop psychosis or schizophrenia. And any connection between these serious mental illnesses and the practice of meditation isn’t entirely clear. While there’s still a lot researchers don’t know, some believe, based on case-reports, that people who are predisposed to mental illness, particularly schizophrenia, are more at risk. They compare the association between psychosis and meditation to observations that in rare cases, mind-altering substances like marijuana can trigger psychosis, particularly in individuals already vulnerable to mental illness. Similarly, not all meditation is the same, and it seems that meditation associated with hours of practice a day may be more connected to adverse experiences like psychosis compared to shorter periods of daily or weekly meditation.

In 2017, a team of psychologists and religious scholars set out to understand the characteristics of these difficult experiences and how common they were. The team interviewed 73 western Buddhist meditation practitioners and experts. Their results, published in the journal PLOS One, found that 47 percent experienced delusions or paranormal beliefs, 42 percent had hallucinations, 62 percent went through sleep changes, and 82 percent experienced fear, anxiety, panic, or paranoia. The experiences weren’t always disabling—for some, they lasted less than a week. However, 73 percent of participants described “moderate to severe impairments” and 17 percent required inpatient hospitalization.

To assess whether meditation might have caused these experiences, the study authors examined 11 criteria, including participants’ own beliefs, how soon after meditating the experience occurred, and whether or not the participants had the same experience when they tried meditating again. On average, participants met four criteria. (In these types of assessments, an average of two criteria is enough to signify a possible causal relationship.)

Still, it’s impossible to determine with certainty whether, in any individual case, meditation causes psychosis. Most interviewees attributed these experiences to meditating, but it’s important to note that the study authors didn’t rule out other factors nor did they establish that meditating caused these experiences. It could be that psychosis and meditation, by chance, happen to coincide, says Pawan Sharma, a professor of psychiatry at Patan Academy of Health Sciences in Nepal. Sharma began publishing case studies and literature reviews on meditation-induced psychosis after working with a patient who was struggling with hallucinations and involuntary movement after months of meditating for hours each day. In some cases, if the interest in meditation seems sudden or uncharacteristic, the fixation could in itself be an early symptom of psychosis, Sharma said.

But from a neuroscience perspective, the apparent connection between meditation and psychosis does make sense. Studies have shown that meditation itself has a very real effect on our brain. Meditation is linked to increased activity in areas of the brain associated with emotion regulation and concentration, which may help explain why some people benefit from the practice.

[Read more: Are hyperbaric chambers really a fountain of youth?]

But like any other treatment or therapy that changes our body, meditation may have side effects. Some of the brain changes we see alongside meditation mimic those that take place during psychosis. For example, there’s evidence to suggest that meditation elevates dopamine in the brain—one of the hallmark characteristics of schizophrenia, says David Zilles-Wegner, a senior physician in psychiatry at University Medical Center Gottingen in Germany. Dopamine doesn’t just make us feel good, it also serves the purpose of telling our brain what is “salient.” In other words, what to focus on. “Dopamine is a kind of amplifier in the brain,” Zilles-Wegner says. But when we have too much dopamine, our brain begins thinking that even insignificant stimuli are relevant and important. Objects might seem to carry hidden messages; television personalities might seem to be speaking directly through the screen.

It’s not just dopamine levels. In some people, meditation seems to sensitize the brain to the environment, making it more reactive. That may be why many people report feeling more attuned to their surroundings after meditating, says Willoughby Britton, a professor of psychiatry at Brown University who studies meditation-related challenges. One possible explanation for this phenomenon is a built in system in our brains, called homeostatic neuroplasticity, which makes sure that neural activity remains stable. When we reduce sensory input, this system turns the dial up, and vice versa.  When we meditate, it’s typically quiet, our eyes are closed, and we’re often actively focusing on only one stimulus (our breath, for instance). As such, there’s less for our brains to process. In response, homeostatic plasticity kicks into high gear. Our brains become more sensitive to stimuli. Nerves fire at the slightest provocation, so that colors become brighter and sounds louder. And sometimes, nerves fire with no stimuli at all—that can cause hallucinations.

People who are genetically predisposed to schizophrenia might be more likely to suffer these side-effects, experts point out. Many case studies of psychosis after meditation have been documented in people with a history of schizophrenia or other mental illness. But there’s not enough evidence to exclude this group of people from meditation entirely, Britton says. After all, some studies have found that meditation actually reduces schizophrenia symptoms.

For some people, the negative side effects of meditation are transient. Twelve percent of participants in the 2017 PLOS ONE study felt impaired for less than a week after their symptoms started. For others, these experiences have longer-lasting consequences. More than half of participants in the same study had symptoms that lasted more than a year.

The college violist falls into that category. Her schizophrenia is very much a presence in her life. Objects still carry subliminal meanings and personalities. But she’s finally found the right medication for her condition. Rather than the barrage that accosted her when she was unwell, these messages have transformed into a kind of enhanced creativity. She’s a writer, a mental health activist, and a musician; she also has a masters degree in social work.

It’s been fourteen years since the onset of her psychosis. She hasn’t meditated since.

It’s controversial to assert that meditation might carry risks. I posted on the r/meditation subreddit, looking for people who might be willing to share their experiences. People who responded called the idea “hogwash.” I told Sharma about this; he laughed. Since beginning work in this area of psychiatry, he’s received his share of hate mail. “When we challenge somebody’s belief, they’re bound to get distraught about that,” Sharma says.

That said, Sharma isn’t anti-meditation. “Meditating is a good thing,” he says. Sharma believes there needs to be more awareness of the practice’s risks. For example, it’s possible that certain meditation practices are safer than others. In 2019, a group of researchers interviewed 1,232 regular meditators, asking them about particularly unpleasant meditation experiences. Their results, published in PLOS ONE, suggested that people who attended retreats, which often involve meditating in silence for hours each day, were more likely to report experiences like anxiety and hallucinations. Sharma also suspects that transcendental meditation, which often involves focusing on a mantra to produce an altered state of mind, is a risk factor for psychosis. Concentrating on the mantra can act as a kind of sensory deprivation, he says, compared to mindfulness meditation, which involves noticing stimuli in the environment.

[Read more: How does BMI change your COVID-19 risk? The answer reveals how little we know about body fat and health.]

The link we observe between meditation and psychosis highlights how little we understand about meditation. Much of the neuroscience focusing on meditation relies on studies that compare meditators and non-meditators, says Katya Rubia, a professor of cognitive neuroscience at King’s College London. It’s hard to draw concrete conclusions from this kind of research, because outside factors, like socio-economic status and activity levels, could affect the results. Ideally, she says, we’d have experiments in which people are randomly assigned to meditation and non-meditation groups, then compared.

Most importantly, studies on the neuroscience of meditation need to better honor the diversity of responses to the practice, Brown University’s Britton says. “Much of science is based on averages,” she wrote in an email, “Neuroimaging studies that seek to understand what meditation does to the brain combine different, and sometimes opposite neurological changes, and make a generalized statement that represents the majority of people.” That statement might be accurate most of the time—but it also tends to swamp other responses to meditation, which matter too and deserve attention. “Science needs to reflect the experiences of everyone, Britton wrote, “not just the majority.”