Sleeping with your screens on is bad for you, whether you know it or not

The light and sound from your screens could be hurting your slumber, whether you know it or not. 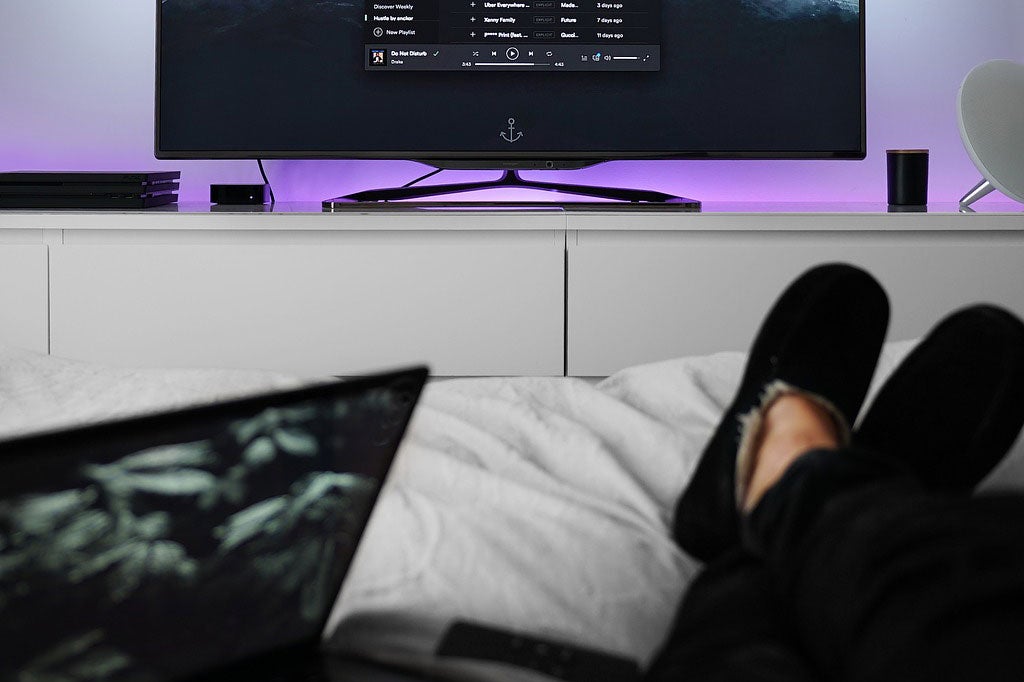 There’s too much good stuff to stream right now, and with Disney’s dedicated streaming service and Apple’s new original content initiative on the horizon, the “problem” seems only to be getting worse. We try heroically to consume all those TVs and movies, but sleep inevitably arrives while the stream continues. For some of us, myself included, the sounds of old Office reruns are a nightly lullaby that help put us to sleep. Or so we think. As it turns out, the streaming content that plays while you slumber isn’t as harmless as we’d hope.

“The two biggest issues with sleeping with a TV on are light and noise,” says Rachel Salas, a sleep researcher and associate professor of neurology at Johns Hopkins Medicine. And if you’re falling asleep with your TV or laptop serving up episodes of The Office you’ve seen a dozen times already, you’re susceptible to both.

The primary concern with TV or movie sounds while you’re sleeping is their unpredictability. Common sleep aids provide white or pink noise, which have different audio signatures, but provide relatively consistent sound when it comes to volume and pitch.

But that’s not true of the stuff coming from your television. “On TV, someone could fire a machine gun or start a car and that sound can cause arousals in your brain,” says Salas. “These arousals shift your EEG (your brain rhythms) and it disrupts your sleep.” So, even if you don’t wake up all the way—or remember that you did—the negative effects can pile up.

An underlying—or even undiagnosed—sleep disorder can compound the problem. Even a small arousal can trigger a bout of chronic insomnia, says Salas. “Humans naturally go through four to five cycles of sleep,” she explains. “If you have an arousal as you move into the deeper stages of sleep, such as REM, your brain has to start from scratch. It has to work its way back.”

If you’re the type of person who can’t sleep in silence, Salas suggests a simple machine like the Marpac Dohm, which has been around for decades, or even a simple fan.

We have an increasing array of LED lights from sources like chargers and displays in our bedrooms, but none throw off quite as much light as the TV. And while the research about the specific effects of blue light exposure before—or even during sleep—are still up in the air, your body can still perceive light even with your eyes closed and that can disturb your brain.

In this regard, Netflix and other streaming services that stop and display an “are you still there?” message may have a slight advantage over something like a typical cable TV station that plays continuously. Even that dark Netflix screen, however, still emits light from your TV’s backlight unless you have a high-end OLED TV that turns the dark pixels off entirely when the screen is black.

If you’re going to fall asleep with a screen in your room, Salas recommends dimming the light from it as much as possible, which is typically easy to accomplish by digging into the settings. Still, your best bet is to turn the screen off completely.

Because we may not remember, or even notice these arousals, they can be hard to track. And consumer sleep aids can’t always paint a complete picture of your slumber cycles. In fact, some researchers believe that constant tracking may lead to new bad habits and disorders.

“When you’re younger, your body can sometimes compensate for disturbed sleep so you may not notice the ill-effects and think you’re doing fine,” says Salas. “That usually changes as you get older, though.” So, even if you’re confident those old Seinfeld episodes that lull you to sleep aren’t doing any harm, only your brain knows what’s really going on and it’s not always going to tell you.